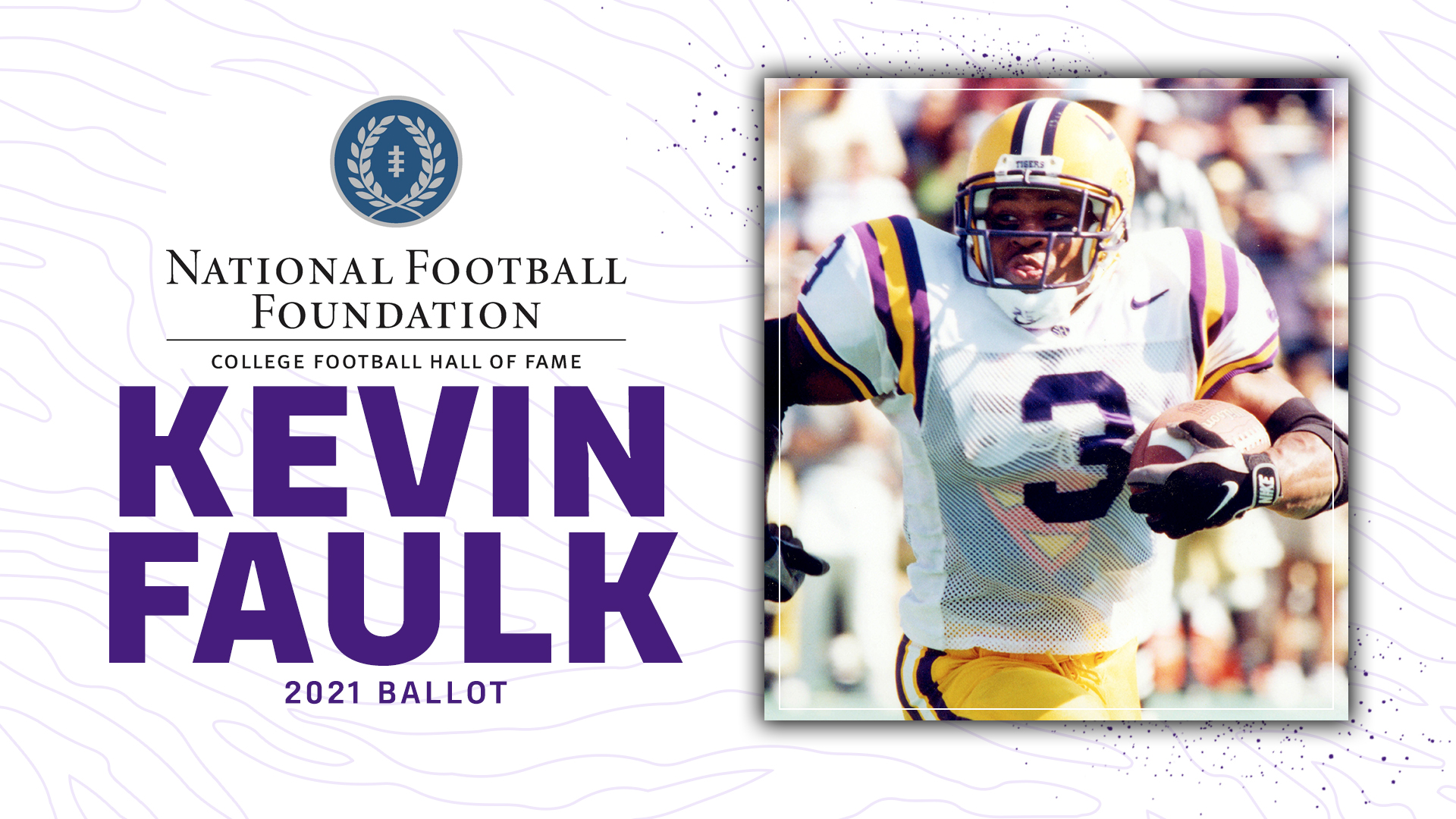 BATON ROUGE – Kevin Faulk, the leading rusher in LSU history and the Southeastern Conference’s all-time leader in all-purpose yards, is one of 78 players and seven coaches from the Football Bowl Subdivision included on the 2021 College Football Hall of Fame ballot, the National Football Foundation and the College Hall of Fame announced on Tuesday. ?
One of the all-time LSU greats and a member of the Louisiana Sports, LSU Athletic and New England Patriots Halls of Fame, Faulk helped lead the Tigers to three bowl appearances from 1995-97. He earned first team Associated Press All-America honors as an all-purpose back in 1996.

Faulk retired from the NFL in 2012 after 13 years with the New England Patriots where he helped the franchise to three Super Bowl titles. Faulk, a 1999 graduate of LSU, currently serves as LSU’s running backs coach.

“It’s an enormous honor to just be on the College Football Hall of Fame ballot considering more than 5.4 million people have played college football and only 1,027 players have been inducted,” said NFF President & CEO Steve Hatchell. “The Hall’s requirement of being a First-Team All-American creates a much smaller pool of about 1,500 individuals who are even eligible. Being in today’s elite group means an individual is truly among the greatest to have ever played the game, and we look forward to announcing the 2021 College Football Hall of Fame Class Presented by ETT early next year.”

The criteria for Hall of Fame consideration include:
·     First and foremost, a player must have received First-Team All-America recognition by a selector that is recognized by the NCAA and utilized to comprise its consensus All-America teams.
·     A player becomes eligible for consideration by the Foundation’s Honors Courts 10 full seasons after his final year of intercollegiate football played.
·     While each nominee’s football achievements in college are of prime consideration, his post-football record as a citizen is also weighed. He must have proven himself worthy as a citizen, carrying the ideals of football forward into his relations with his community. Consideration may also be given for academic honors and whether the candidate earned a college degree.
·     Players must have played their last year of intercollegiate football within the last 50 years.* For example, to be eligible for the 2021 ballot, the player must have played his last year in 1971 or thereafter. In addition, players who are playing professionally and coaches who are coaching on the professional level are not eligible until after they retire.
·     A coach becomes eligible three full seasons after retirement or immediately following retirement provided he is at least 70 years of age. Active coaches become eligible at 75 years of age. He must have been a head football coach for a minimum of 10 years and coached at least 100 games with a .600 winning percentage.
·     Nominations may only be submitted by the current athletics director, head coach or sports information director (SID) of a potential candidate’s collegiate institution. Nominations may also be submitted by the president/executive director of a dues-paying chapter of the National Football Foundation.

Candidates are listed alphabetically. This ballot includes candidates who were selected by the Honors Court and District Screening Committees.