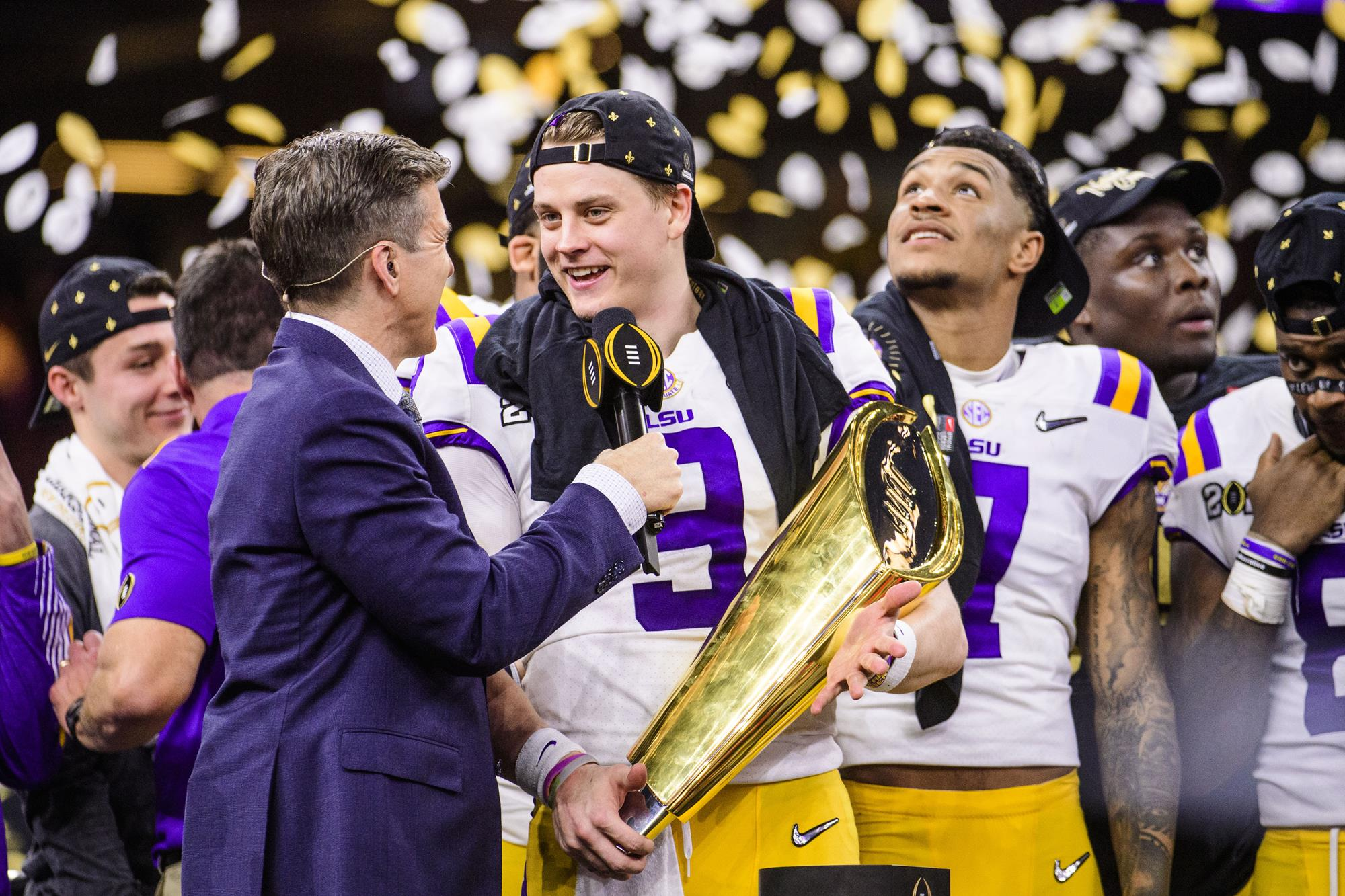 NEW ORLEANS – After turning in what is arguably the best season ever for a collegiate quarterback in 2019, LSU star Joe Burrow was selected unanimously as the Allstate Sugar Bowl’s James J. Corbett Award winner. The honor is presented to the top amateur athlete in the state of Louisiana.

The Corbett Awards have been selected since 1967 by the Greater New Orleans Sports Awards Committee, sponsored by the Allstate Sugar Bowl. This year’s female Corbett Award winner was LSU track star Tonea Marshall making this the 10th time that LSU has swept the honors since separate male and female awards were instituted in 2000. The duo are the 42nd and 43rd Tiger stars to earn the honor in the 54 years that it has been presented.

The Sports Awards Committee selects honorees in a variety of categories – it also selects Amateur Athletes of the Month and each year’s Greater New Orleans Sports Hall of Fame class. Overall, 24 individuals and four teams will be honored for their 2019-20 achievements.

Burrow, a native of Athens, Ohio, set the NCAA FBS record with 60 touchdown passes while leading the nation with 5,671 passing yards (an LSU and SEC record and the third most all-time) and narrowly missing setting the FBS record for completion percentage – he finished at 76.3 percent as he completed 402 of 527 passes (Texas’ Colt McCoy set the mark at 76.7 percent in 2008).

Most impressively, he led the Tigers to a perfect 15-0 season including a dominant 42-25 College Football Playoff (CFP) National Championship victory over defending champion Clemson. Burrow was named the Most Outstanding Player of the championship game after throwing for 463 yards and five touchdowns.

“I still can’t believe how everything came together for me at LSU,” Burrow said. “I had the opportunity to join an amazing team and together we reached and surpassed all of our goals. The state of Louisiana embraced me along the way and became a second home to me. To be recognized as the top athlete in the state is a tremendous honor and I want to thank my teammates and coaches as well as everyone who supported me.”

“I’ve never been around a player like Joe,” said LSU head coach Ed Orgeron, “and obviously he’s very talented and he’s a leader, but day in and day out, he’s the same guy. Very focused, focused on the task at hand. It’s about execution and winning and being great…The guy is a perfectionist. It does rub off on our football team. He’s an outstanding leader.”

“Something that I’ve always been scared of is, that saying, ‘There’s always someone out there that’s getting up earlier and working harder,'” Burrow said prior to the NFL Draft, in which he was selected No. 1. “I’ve always tried to be that other person, when people say that, I try to be the guy that they’re talking about.”

Burrow’s sensational national championship performance followed a remarkable Playoff Semifinal effort in LSU’s 63-28 obliteration of Oklahoma. He completed 29-of-39 passes for 493 yards and an SEC-record tying seven touchdowns while adding a rushing TD. His combined numbers for the two CFP games were 60-of-88 (.682) for 956 yards and 12 touchdowns, as well as a pair of rushing scores.

“As soon as we walked off the field, my junior year after the bowl game, I knew exactly what was gonna happen [in 2019],” Burrow said. “We didn’t focus on winning the national championship. We focused on dominating every single team that we played. And I think that was the key to our success.”

“[Burrow means] the world [to me],” Orgeron said after LSU won the national title. “He’s one of the greatest players in LSU history. He’s done so much for the state of Louisiana and LSU. We are so grateful for Joe Burrow.”

Other finalists for the honor included Burrow’s LSU teammate Ja’Marr Chase, Louisiana Tech’s Amik Robertson and UL-Lafayette’s Kevin Dotson. Chase, the Greater New Orleans Amateur Male Athlete of the Year, set LSU records for touchdown receptions (20) and receiving yards (1,780) as he earned the Biletnikoff Award as the nation’s top receiver. Robertson earned All-America honors at defensive back after anchoring the Bulldog defense with 60 tackles, eight tackles for loss and five interceptions before being drafted by the Las Vegas Raiders. Dotson earned All-America recognition on the offensive line after helping the Ragin’ Cajuns rank third nationally in yards per carry (6.28), fourth nationally in rushing touchdowns (42) and sixth nationally in rushing yards per game (257.4). He was drafted by the Pittsburgh Steelers.

The Allstate Sugar Bowl has established itself as one of the premier college football bowl games, having hosted 28 national champions, 96 Hall of Fame players, 50 Hall of Fame coaches and 18 Heisman Trophy winners in its 86-year history. The 87th Allstate Sugar Bowl Football Classic, which will double as a College Football Playoff Semifinal, is scheduled to be played on January 1, 2021. In addition to football, the Sugar Bowl Committee annually invests over $1.6 million into the community through the hosting and sponsorship of sporting events, awards and clinics. Through these efforts, the organization supports and honors over 100,000 student-athletes each year, while injecting over $2.7 billion into the local economy in the last decade. For more information, visit www.AllstateSugarBowl.org.