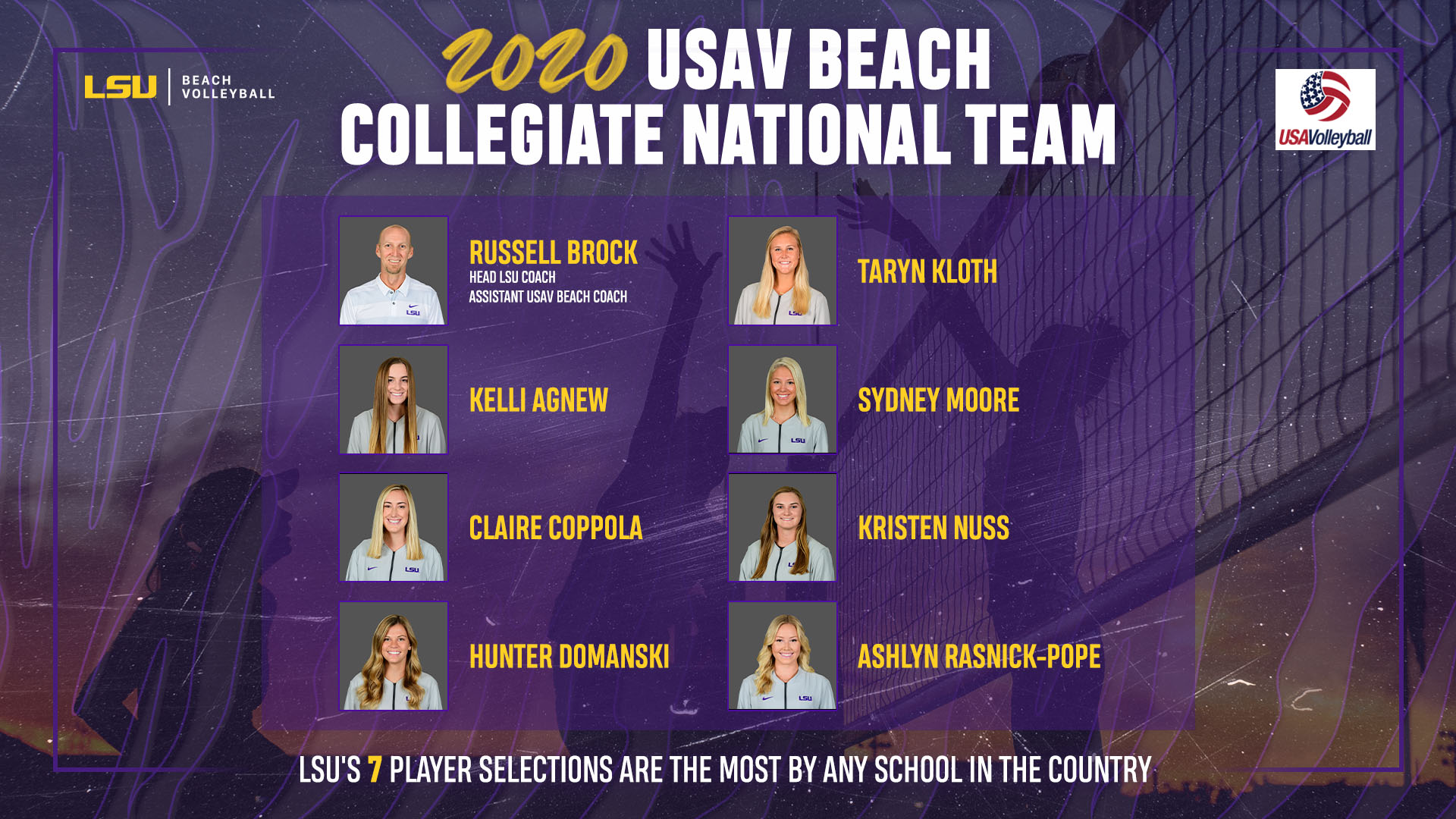 BATON ROUGE –  LSU Beach Volleyball led all programs with seven selections to the 2020 U.S. Beach Collegiate National Team when it was announced Wednesday morning. Head Coach Russell Brock was also selected as an assistant coach for the team.

Twenty-nine women and 14 men were named to the team. Players were nominated by their coaches and chosen based on their collegiate rankings. LSU’s seven selections led all schools on the women’s team – the next closest school, USC, had five players selected.

Training plans for the team are currently on hold due to Covid-19.

The seven LSU choices all played critical roles in the lineup during the 2020 season which saw the Tigers climb to the No. 1 spot in both the AVCA and DiG Polls for the first time in program history. LSU’s pairs from Court 1 and Court 4 were selected to the team along with individuals from the other three courts.

Through four seasons, Coppola and Nuss have solidified themselves as one of the greatest NCAA Beach Pairs of All-Time. During the final week of the 2020 season before it was cut short, LSU’s Court 1 pair became the third collegiate duo of all-time to reach the 100-win mark together. They were each granted an extra year of eligibility due to the shortened season and will head into their final year at LSU with 103 total victories as a pair.

Agnew and Kloth paired together on Court 4 in 2020 and had one of the best seasons of any duo in the nation. They combined to go a perfect 13-0 without dropping a single set; the only pair in the country to compete in at least 10 matches together and accomplish such a feat.

Domanski finished the season with a 10-4 record on Court 5, including victories over four pairs from ranked teams. All 10 of Domanski’s wins came in straight-sets and she finished the season on a seven-match win streak. Her 57 career victories are good for the ninth most in LSU program history.

Moore had a very successful freshman campaign in 2020, going 10-4 on Court 2 with Jess Schaben including a perfect 5-0 record during the second weekend of the season. Her and Schaben clinched LSU’s match over then No. 1 UCLA on February 29 in front of a NCAA Beach Volleyball record crowd at LSU Beach Volleyball Stadium, propelling the Tigers to the top of the polls.

Rasnick-Pope followed up an impressive freshman season with more success as a sophomore. Along with Toni Rogriguez, Rasnick-Pope went 10-2 on Court 3 with five wins over pairs from ranked teams. Together they clinched LSU’s first match over No. 1 UCLA on February 23 in the championship match of the Duke Kahanamoku Beach Classic in Honolulu, Hawaii.

All of LSU’s seven selections to the USAV Beach Collegiate National Team are set to return in 2021, bringing a lot of talent and experience back to the sand for another season.