Presented by SEC; Seventh LSU Athlete to Be Honored 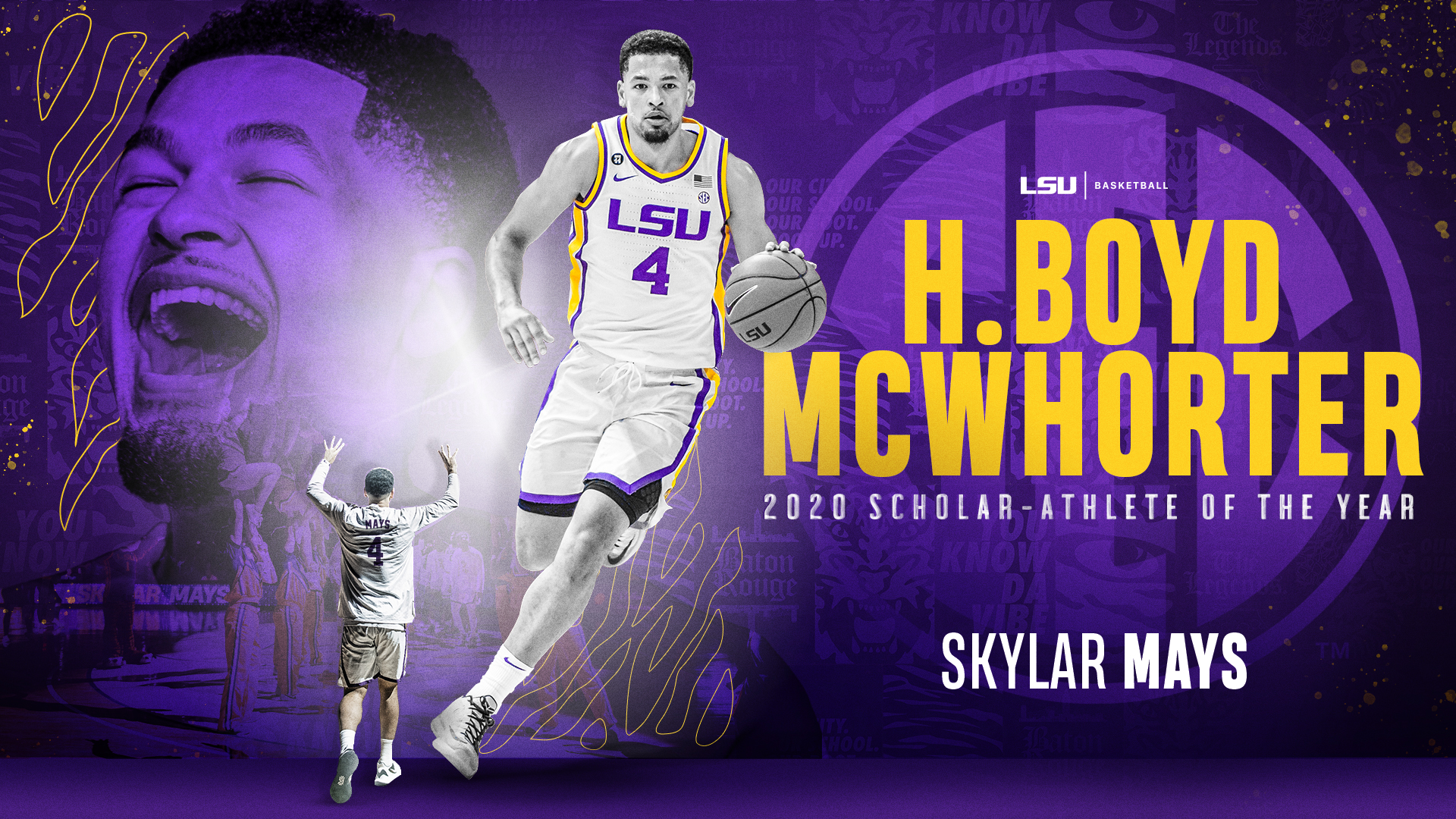 BATON ROUGE – LSU senior Skylar Mays, who graduated from LSU recently after four stellar years as a member of the men’s basketball team, has been honored Tuesday with the announcement by Southeastern Conference Commissioner Greg Sankey that the Baton Rouge native is one of the 2020 H. Boyd McWhorter Scholar-Athletes of the Year.

The H. Boyd McWhorter Scholar-Athlete Post-Graduate Scholarship winner is chosen by a committee of Faculty Athletics Representatives from SEC universities. The award has been presented by the SEC since 1986 to the league’s top male and female scholar-athletes. The 2020 female winner is swimmer Asia Seidt from Kentucky.

The SEC provides the league’s male and female McWhorter Scholar-Athlete of the Year recipients with a $20,000 post-graduate scholarship.

“Asia and Skylar are outstanding representatives of student-athletes from across the SEC. They made a commitment to the total student-athlete experience, which resulted in their excellence in competition and in the classroom,” Sankey said. “The H. Boyd McWhorter Award is the highest honor earned by a student-athlete in the SEC and I congratulate both of them along with their families and universities on their outstanding achievements.”

This is the second major scholar-athlete award that Mays has received this spring as he was named the CoSIDA Basketball Academic All-America of the Year in 2020 and was a first team Academic All-America in both 2019 and 2020. Both years he was also chosen as the SEC Scholar Athlete of the Year in basketball with a cumulative grade point average of 3.93 He is a three-time member of the SEC Academic Honor Roll.

“Skylar is a tremendous example of someone who excels both on and off the court,” said LSU Head Basketball Coach Will Wade. “We have been very fortunate to have coached Skylar his last three years and his work ethic and ability to persevere through difficult times makes him an outstanding choice for this award. He has a wonderful family and Skylar has a bright future in basketball and in his educational opportunities when that time comes.”

Mays, who was also a member of the SEC Community Service Team, received his degree in kinesiology/human movement.

The Louisiana Sports Writers Association player of the year was named All-SEC First Team in 2020 in leading the Tigers to a tie for second place finish in the SEC and 21 wins when the season was terminated. He averaged 16.7 points, 5.0 rebounds, 3.2 assists and 1.8 steals a game in 2019-20 and over four seasons had 88 games in double figures.

He was also named the major college player of the year in Louisiana and the winner of the Pete Maravich Award by the Louisiana Association of Basketball Coaches.

The Tigers won the SEC Title in 2019 and finished in a tie for second in 2020, winning a total of 28 league games over the two seasons.

Mays is the seventh overall winner of the McWhorter Scholarship Award from LSU since the award was established in 1986 and the fifth male LSU graduate to capture the award. It is the third time in the 35-year history of the award that an SEC men’s basketball player has captured the honor.