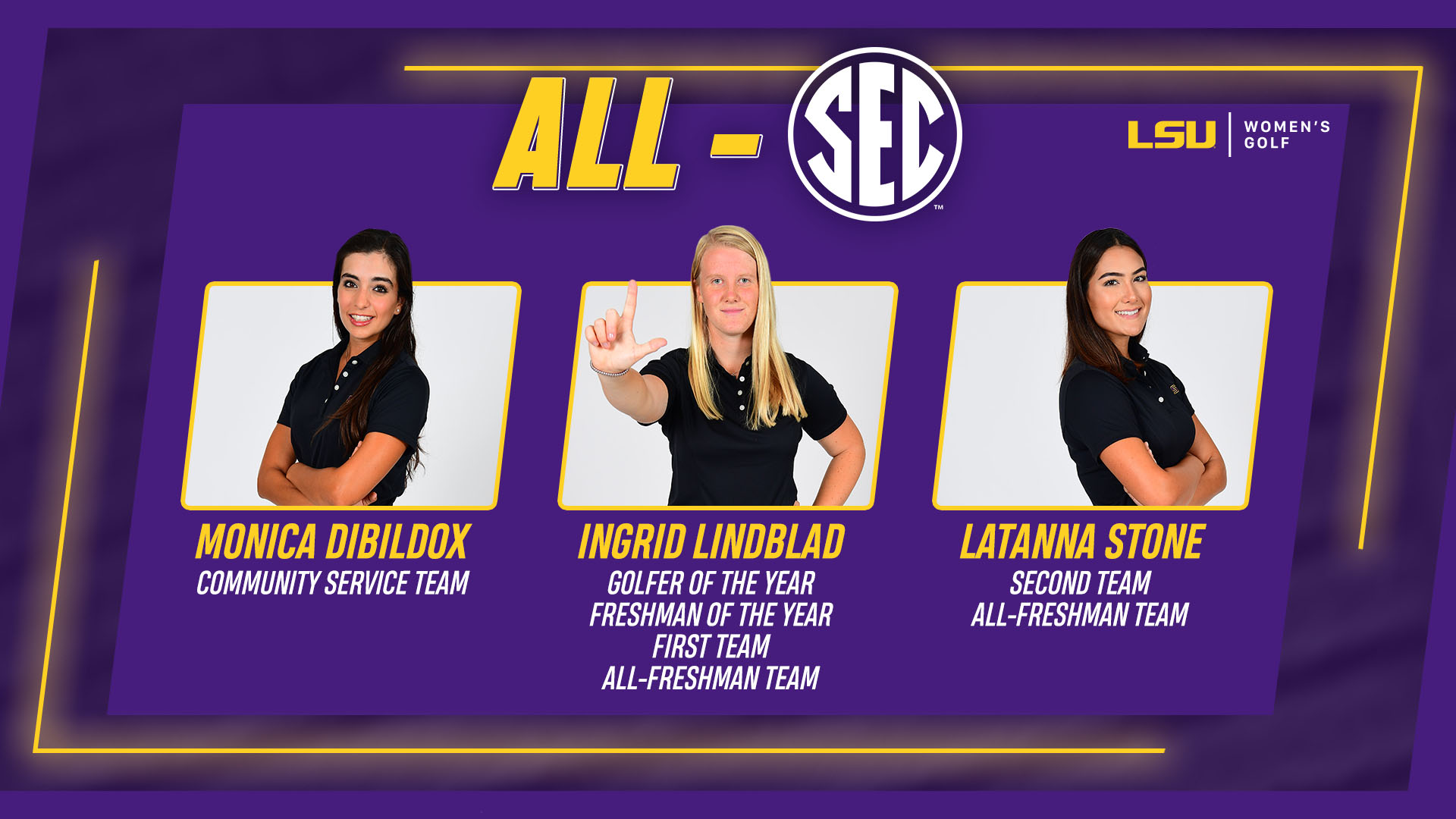 BATON ROUGE — For the first time in LSU women’s golf history, a player has been named SEC Golfer of the Year and Freshman of the Year in the same season. Rookie Ingrid Lindblad earned both honors for the 2019-20 season by a vote of the SEC head coaches as announced by the conference office today.

Lindblad became the fourth LSU Tiger to be named the SEC Golfer of the Year, joining an elite group with alumnae Jenny Lidback (1986), Kristi Coats (1991) and Madelene Sagstrom (2015). She is the third Tiger to earn league rookie honors, following in the footsteps of Coats (1990) and Kristin Parker (1987).

“With the unfortunate and sudden end to our season during this crazy time, it is nice to get some great news,” said LSU head coach Garrett Runion. “I am proud of the accomplishments of Ingrid, Latanna and Monica and excited to see the rest of the coaches in the league acknowledge their success.

“No other school had more than two players named to the all-conference teams. We are fortunate to have two this season, both freshman who are creating a solid foundation for the LSU women’s golf program to build on in the coming years. I could not be happier for our young ladies and these well-deserved honors. “

Lindblad posted the lowest single-season average in LSU history with a 70.33. She finished the season ranked No. 2 by Golfweek and No. 9 by Golfstat. The Halmstad, Sweden native was a Top-3 finalist for the 2020 ANNIKA Award presented by Stifel given annually to the top female collegiate golfer. She shot 14 of 21 rounds of par or under over seven tournaments. She recorded five Top-5 finishes with two wins at the Magnolia Invitational (October 14-16, 2019) and the Florida State Match-Up (February 29-March 1, 2020). Lindblad shot a career single-round low of 6-under 66 to start the Spring season in the first round of the IJGA Collegiate Invitational on February 16, 2020.

In addition to recognition by the ANNIKA Award, Lindblad received an invitation to the 2020 Augusta National Women’s Amateur and was selected to the International Team for the 2020 Palmer Cup. She was also named the Louisiana Player of the Year and to the 2020 All-Louisiana team by the Louisiana Sports Writers Association. She also earned SEC honors for Freshman of the Week on February 19 and Golfer of the Week on March 4.

“Ingrid had a tremendous, record-breaking year and definitely was worthy of taking home all four honors,” continued Runion. “She joins an elite group of SEC and LSU golfers in winning both Golfer of the Year and Freshman of the Year.”

Stone was second on the team with a 72.56 average and shot six of her 18 rounds at par/under. The Riverview, Florida native ranked No. 38 in the NCAA by Golfstat and No. 24 in the SEC. Her season average ranks fifth on the LSU single-season list. Her top finish was second at the Battle at the Beach (November 1-3, 2019). She posted three Top-10 finishes in six tournaments. Stone is also a Palmer Cup selection for the United States Team. She was also named to the All-Louisiana Team this season.

“Latanna had a great rookie season as well,” stated Runion. “To be named to the Second Team and the All-Freshman Team is awesome.”

Dibildox, who earned her bachelor’s degree in Sport Administration on Friday, May 15, was named to the SEC Community Service Team. Dibildox has been the team’s representative on the LSU Student-Athlete Advisory Committee (SAAC) for the past two seasons, serving as SAAC Vice President in 2019-20, and participated in the 2018 and 2019 SEC Career Tour in Atlanta. She and her teammates participated in the annual BOOzar and Thanksgiving with the Tiger events. Dibildox also assists at youth clinics and as a youth speaker in Baton Rouge and in her native Mexico.

“Monica has been very involved with the SAAC and takes great pride in her work with the committee,” said Runion. “She was the leader on our team when it came to our time spent out in the Baton Rouge community.”

LSU finished the season ranked No. 12-ranking by Golfweek. The Tigers claimed three titles during the season – the Princess Anne Invitational, the Magnolia Invitational and the Florida State Match-Up – and recorded six top-three finishes in seven events. LSU began the 2019-20 season with a third-place finish at the Mercedes-Benz Championship and followed up with back-to-back wins.

The Tigers wrapped up the Fall season with a second-place performance at the Battle at the Beach and started the Spring with a second-place finish at the IJGA Invitational. At the Florida State Match-Up, all five scoring players finished in the Top-18 on the leaderboard as LSU claimed the most team titles in a season since 2014-15.