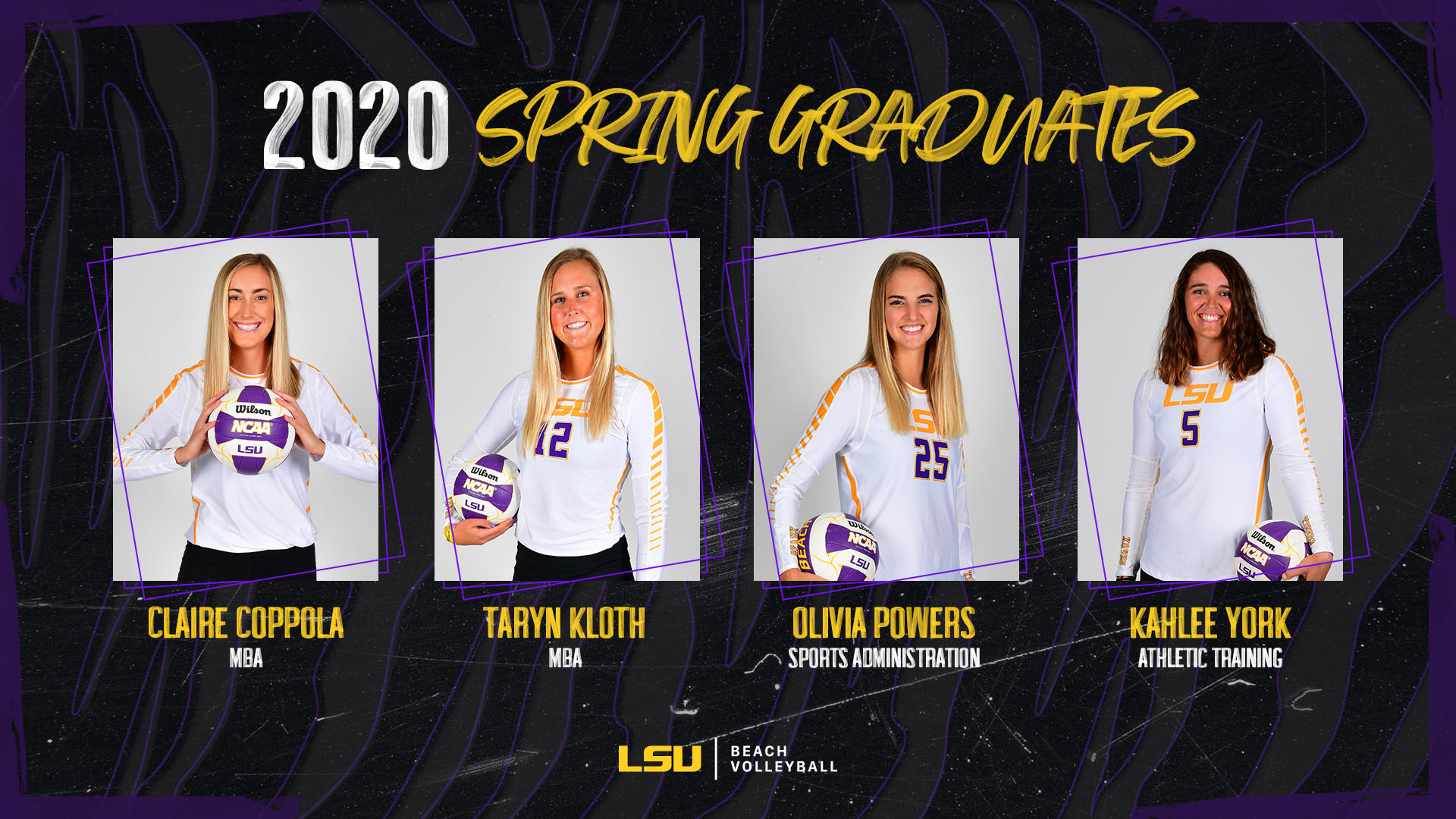 Claire Coppola and Taryn Kloth graduated with a Master’s in Business Administration while both Olivia Powers and Kahlee York earned undergraduate degrees from the College of Human Sciences and Education.

The group of four were all on the Beach Volleyball team that earned the 2018-19 Tiger Cup at the LSU Mikey’s, awarded to the team with the most production in the areas of competitive success, academic accomplishment and community service participation.

Earlier in the Spring the Tigers were 12-2 and were ranked as the No. 1 team in the country before the season was shortened.

Coppola, a four-year leader for the Tigers, graduated from LSU last spring in three year in Marketing and Professional Sales. She immediately began working towards her MBA during the summer of 2019 and graduated with a concentration in entrepreneurship.

On the Court, Coppola has helped take the Tigers to new heights. Earlier in the Spring, she and her partner on Court 1, Kristen Nuss, became just the third NCAA beach pair ever to reach the 100-win mark together. Her consistent play on Court 1 for LSU over the past four seasons helped lead the Tigers to national prominence, most recently reflected by the program’s first ever No. 1 ranking in both the AVCA and DiG Polls. Coppola is set to return next season after the NCAA granted spring student-athletes an extra year of eligibility due to the season being cut short.

Kloth joined the Tigers prior to the 2019 season as a graduate transfer from Creighton University where she graduated with a degree in finance. When she came to Baton Rouge, Kloth began working towards her MBA with a concentration in non-profit organizations and sports marketing.

This season Kloth took her game to new heights. Her and partner Kelli Agnew were perfect on Court 4 for the Tigers, going 14-0 before the season was halted. They were the only pair in the country that played at least 10 matches together and no drop a single set. The pair earned AVCA National Pair of the Week honors after going 5-0 against Top-20 teams to open the season in Hawaii. Kloth’s play was an integral part in the Tigers earning a No. 1 ranking. Kloth is also set to return next year.

Powers earned her degree in Sports Administration, graduating in four years. She went 7-0 in 2020 and did not drop a set on Court 5. One of the most successful players in LSU Beach Volleyball history, Powers leaves the program as the eighth winningest player in program history with 63 total victories. She helped lead LSU to appearances at the NCAA Championship Tournament in 2017-2019, including the program’s first semi-finals appearance in 2019.

York graduated in three years with a degree in Athletic Training. At the 2019 NCAA Championship, York stepped up in a big spot, making an emergency start on Court 5 for LSU in the semi-finals against USC. She helped lead the Tigers to a win on Court 5, before LSU ultimately fell in the overall match, finishing a program-best No. 3 in the country. York will return next season.