A Long Time in the Making 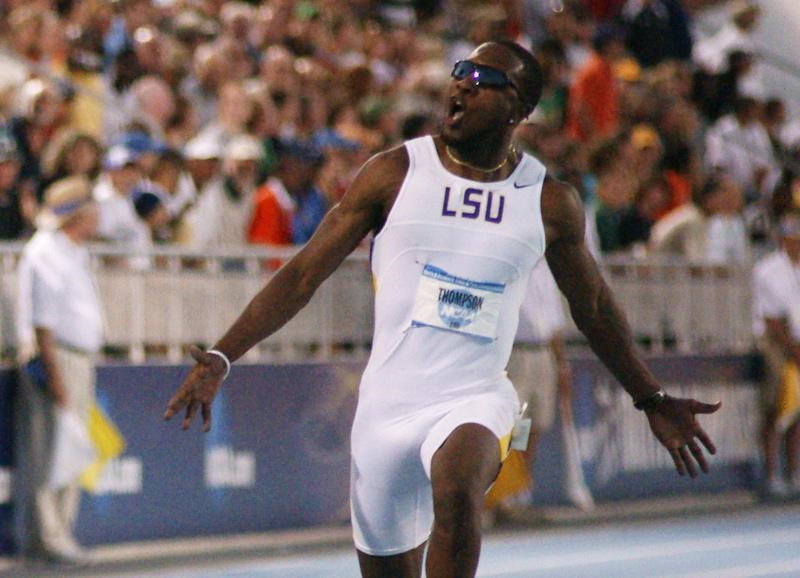 Baton Rouge, La. – A lifelong dream and promise to himself will come true for former LSU sprinter Richard Thompson on Friday morning as he will graduate with a degree in sociology from LSU. He’s a three-time Olympian, multiple time SEC and NCAA champion, and a soon to be college graduate – all of these achievements are the result of lots of hard work and dedication.

It’s been 15 years since Thompson first set foot on LSU’s campus in January of 2005 as a freshman that had a tremendous work ethic. Fast forward to May of 2020 and Thompson is set to become a college graduate, something that’s been a longtime in the making thanks to his lengthy athletic career.

“I always thought it was important to come back to school and finish my degree,” Thompson says. “I was fortunate enough to have a successful professional career that lasted over a decade, you know. I cherished all the experiences I had while I was competing worldwide.

“This year has been circled on my calendar for sometime now. I wanted to run in one more Olympics (Tokyo 2020), but I also wanted to have my degree in hand before then. I got in touch with Coach (Dennis) Shaver and we made it happen. LSU was so accepting of me when I voiced my interest to come back and complete my degree.”

Thompson returned to Baton Rouge in the fall of 2019 and began on finishing off his degree while simultaneously training for his last run at the Olympics. Class in the morning, practice in the afternoons, it was just like the good ole days when Thompson was first on campus back in the mid-2000s.

“That’s why I love LSU so much,” Thompson notes. “Everybody here welcomed me back with open arms and made my transition a smooth one. It was a bit of a blessing for me as well as I had the chance to mentor some of the current student-athletes.

“I was able to give them real-life knowledge that I’ve learned over the years. I wanted to encourage them to perform well in the classroom and on the track. What kind of work it takes, you know? It doesn’t come easy, but if you just stick to the plan, good things will happen.”

When you’re an Olympian, a number of people look up to you as a role model whether you like it or not. Thompson knew that and has done his best to give back. The aforementioned advice he’s provided to current LSU student-athletes along with the numerous camps he’s hosted back in his homeland of Trinidad & Tobago are a prime example of that.

“I think anybody that has success has a certain responsibility to those who come after them,” Thompson says. “I’ve always tried to be present for our youth in Trinidad & Tobago. I’ve always put a priority on mentoring and speaking to them when I have the chance. I’ve hosted camps on a yearly basis back home since 2009 and I cherish those opportunities. I understand the impact I can have on them and that is a responsibility I take to heart.”

On The Track – LSU

Thompson was an avid sportsman growing up like most kids. He enjoyed all the sports and was active. Soccer was his first love but by the time he made it to high school he knew track was his best bet. That’s when coming to America for college became a reality.

“I started looking at what some of the other Trinidadian athletes had done prior to me,” Thompson remembers. “Ato Bolden (4x Olympian) was somebody who I looked up to and I saw he went to UCLA. To me, going to America where I could get an education and train at the finest facilities was a no-brainer. I knew if I wanted to get to the next level that was the route I had to take.”

LSU was just what Thompson needed. He was surrounded by excellence and for those of you that know how that stuff works, it became contagious. It was a challenge at first for Thompson, but he didn’t let that deter him. Instead, he used it as motivation and learned from those who came before him.

“At LSU there was this environment and culture of success,” Thompson says. “Coming into LSU, you’re expected to be an All-American and win national titles and that’s what I strived for.

“I trained day-in, day-out with some of the best. I mean you look at Kelly Willie, he’s an Olympian, Bennie Brazell, he’s an Olympian, Xavier Carter, he was just a freak of nature. That’s what I went up against everyday in practice and that prepared me for actual competitions. I paid attention to every single thing those guys did and that’s what helped me develop into the athlete I became.”

During his time at LSU he won four NCAA titles, five SEC titles, and set the school records in the 60 meter (6.51) and 100 meter dash (9.89), both of which still stand to this day. His senior season in 2008 saw him go a combined 9-0 between the 60 meter dash and 100 meter dash en route to winning national titles in both events. That wrapped up his collegiate career and just two short months later he would be on the world stage representing Trinidad & Tobago.

“Richard was one of my favorite guys to coach,” current LSU head coach Dennis Shaver recalls. “He was a hard worker and always wanted to get better. He was competitive and also had a great attitude. We took a chance on him and he made the most of it. It was a pleasure to witness his work on a daily basis and as he knows, it’s paid off in the long run – on the track and in the classroom.”

On The Track – World Championships & Olympics

We have to rewind to a year prior in 2007 before we get to the 2008 Beijing Olympics. Anything below 10 seconds, wind-aided or not, that’s a baseline for letting sprinters know they are the real deal in the 100 meter dash. The first time Thompson went sub-10 was in 2007 at the Trinidad & Tobago Championships. He ran a wind-aided 9.95 to earn silver at his country’s national meet and that earned him a trip to the 2007 World Championships in Osaka. He made it to the quarterfinals of the world championships before bowing out, but he learned invaluable lessons at his first world meet.

“I didn’t make the finals in 2007, but I got to experience track and field on the most elite stage,” Thompson says. “That experience prepared me for what was to come and it even gave me loads of confidence for my senior season back in the NCAA. I knew that I belonged and it fueled me.”

Following his unblemished senior season at LSU, Thompson began his ascent as one of the best sprinters in the world. He ran sub 10 seconds twice in an LSU singlet in 2008 – 9.93 at the SEC Championships and 9.97 at the NCAA regional meet. It wasn’t again until later that summer at the Beijing Olympics that he cracked 10 seconds, and he did it three times in a row. 9.99 in the quarterfinals, 9.93 in the semifinals and just like that he was a finalist in the 100 meters at the Olympics.

“As the 2008 season kept progressing, I kept getting more and more confident,” Thompson notes. “The more confident I became I did not care who I came up against, I just had a belief in myself. Before you know it, I’m on the biggest stage in the world running out of lane five.”

Thompson dashed down the straightaway in a blazing time of 9.89 seconds to claim his first ever individual Olympic medal with a second place finish. He was beat out by Usain Bolt who ran a then-Olympic record of 9.69 seconds.

“I was never a prodigy growing up,” Thompson recollects. “I had to work really hard for what I got. Growing up I always had this dream of being an Olympian, but to say that I believed I was going to win a silver medal in the 100 meters at the Olympics is farfetched. So it hit me full circle when I won silver at the 2008 Olympics and I knew this was something that I could do for awhile.”

Prior to his individual silver in the 100 meters at the 2008 Olympics, Thompson served as the anchor leg on the Trinidad & Tobago 4×100 meter relay team that earned silver with a time of 38.06 behind Jamaica. It was revealed in 2017 that a re-analysis of one of Jamaica’s test samples from 2008 came back as positive for a prohibited substance which DQ’d Jamaica and granted Trinidad & Tobago the gold medal.

“It’s bittersweet,” Thompson says. “Obviously you’re happy that you’ve achieved the highest feat possible in track and field – an Olympic gold medal. At the same time, there’s a big part of having your national anthem playing as your flag is being raised and we didn’t get to experience that.

“I’m honored and couldn’t be more proud to achieve Olympic greatness. We’ve pretty much had the same group of guys representing Trinidad & Tobago at the Olympics dating back to the 2008 Olympics. We’ve made three finals and medaled twice at those Olympic competitions. I’m very proud of how we’ve carried ourselves and represented our homeland.”

The Trinidad & Tobago relay team has been Olympic finalists every Olympics dating back to 2008 and Thompson has been on every one of those relay teams. The team added a silver medal in the finals of the 2012 Olympics in London.

The three-time Olympian (2008 Beijing, 2012 London, 2016 Rio) had aspirations of representing his homeland once more again this summer in Tokyo. Asked if he’ll make one more go at a fourth Olympics in 2021, Thompson says, “That’s up in the air. We’ll see how these next couple of months go. I’m enjoying time with my wife and kids and that’s what I’m focused on right now.”