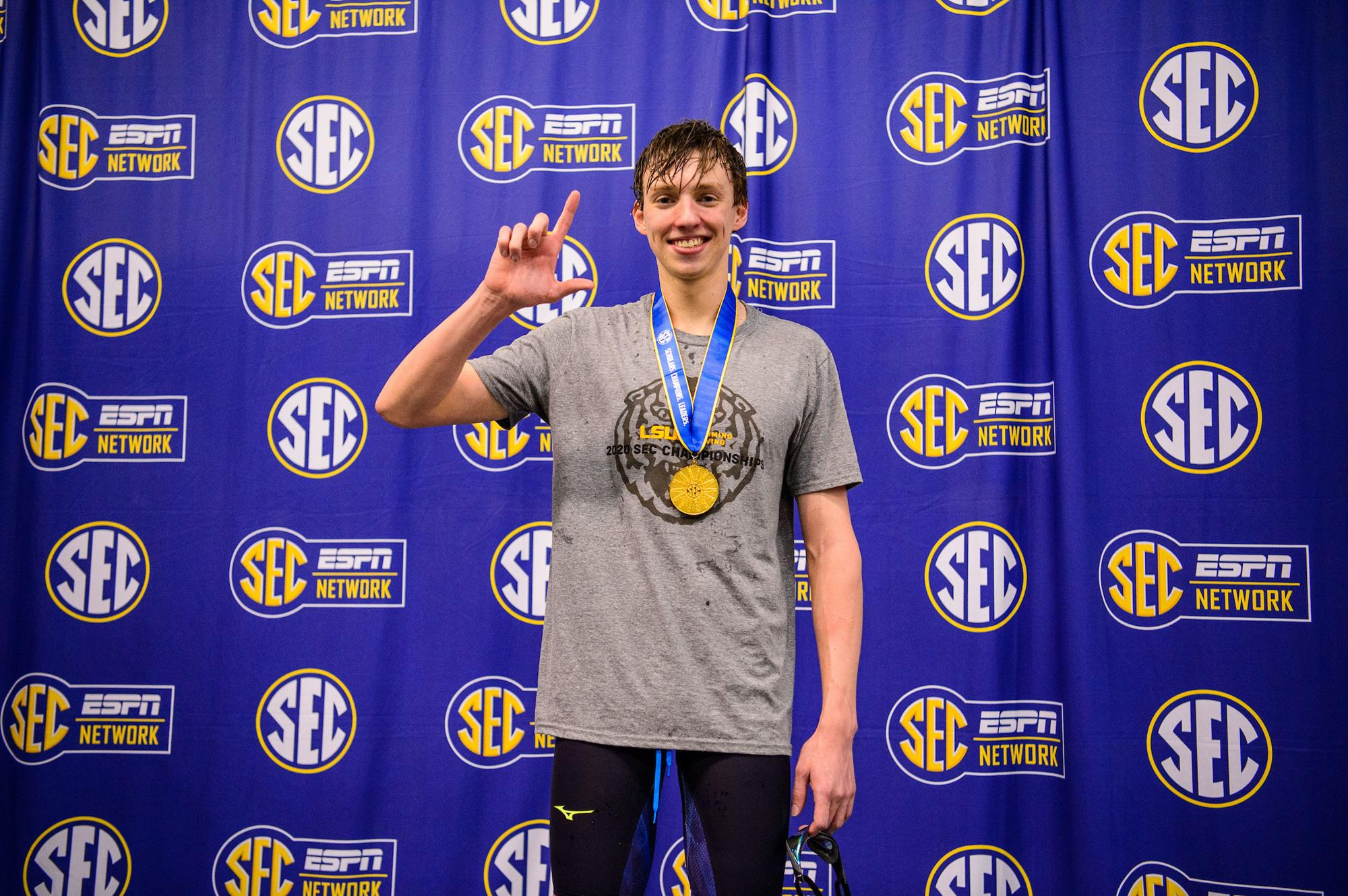 LSU freshman swimmer Brooks Curry set out one goal before the season: make it to NCAAs.

Finishing the season as the fastest freshman in the country in all three freestyle events, along with his standout performance at SEC Championships, qualified him to reach that goal, and forced him to set new ones.

But like hundreds of LSU spring student-athletes, Curry was one of many who felt the sudden impact of widespread COVID-19 cancelations. Everything seemed to shift in the blink of an eye, and Curry was ultimately never able to showcase his talents in the events he worked so hard to compete in.

“It was surreal when I heard it was canceled,” Curry said on NCAAs. “It was super disappointing. But at that point, there wasn’t anything I could really do about it. There was no point getting worked up or angry, I just had to move on.”

Now with all this unexpected free time at his home in Atlanta, Georgia, Curry says he’s trying to bulk up and eat as much as he can, while lifting weights and occasionally going fishing once or twice a week to keep his mind off things.

Eager to eventually get back in the water, his family recently ordered a swim tether – a piece of equipment designed to provide a resistance workout – and at some point, Curry hopes to take that out to his neighbors’ backyard pool.

At SEC Championships in February, Curry broke school records in the 50, 100, and 200-yard freestyle, shattering even his own expectations for his first season in Baton Rouge. After becoming an SEC Champion in the 100-yard freestyle as the only freshman in the field, Curry was interviewed by ESPN+, in what he categorized as his favorite moment as a Tiger to date.

Stepped up on the BIGGEST stage ?? pic.twitter.com/I7LintnQ6Z

“LSU was one of the only colleges that was talking to me,” Curry admitted. “I took my trip here and the guys were super cool and made me feel like I was at home. I’ve loved every part of the team so far, it’s been such a good decision.”

“I had no idea all of this was coming so quickly,” he added. “The success from SECs, to making NCAAs and being seeded to score so highly was just crazy to see throughout this year and totally unexpected.”

Curry immediately credited assistant coaches Steve Mellor and Lyle Robelot for their efforts toward his development and training throughout the year that, he says, led to his successes.

Coach Mellor says this year was all about learning what it meant to be consistent in his approach to training and racing. In fact, each week that went by, it was clear to Mellor that Curry absorbed the lessons from the week before, and was ready to learn something new.

“He’s a born competitor, so as he developed and matured more, his competitive nature took over and allowed him to excel against the best competition in the SEC Championships,” Mellor said.

Even though his transition to the collegiate level in the pool has felt seamless, Curry’s biggest challenge at LSU has been adapting from his high school routine to weathering the greater responsibilities and independence that college brings.

On Saturday, LSU held its annual end-of-season Swim and Dive Awards banquet, except this time it was virtual by way of Zoom, as head coaches Dave Geyer, Doug Shaffer and the rest of the staff announced several awards.

For Curry, it was a fitting end to a remarkable season, taking home four major honors: Newcomer of the Year, Most Improved Male, Hammer Award, and Most Valuable Male.

And while the season may be over, Curry’s dominance in the SEC is just getting started. Holding three individual school records and four relay school records in Year 1, that was merely a glimpse into what promises to be a special three years ahead.