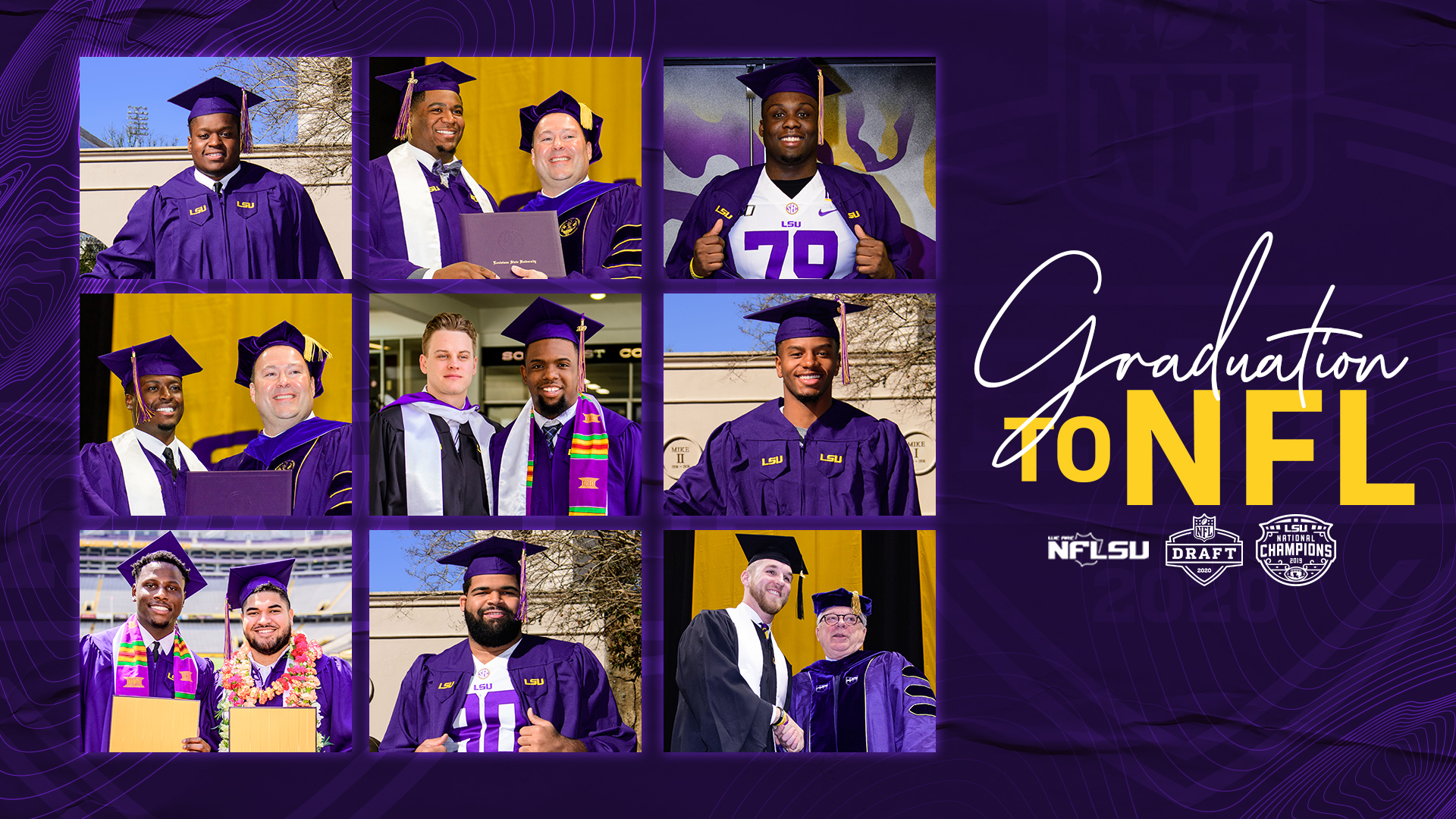 BATON ROUGE – LSU is delivering more than just outstanding football players to the NFL, the national championship program is also sending 11 college graduates to the league.

With the conclusion of the NFL Draft and free agent signings over the weekend, 11 LSU players from the 2019 national championship team that were either drafted or signed free agent contracts are heading to the NFL with a college degree.

“This is an outstanding group of young men that competed and were successful at the highest level both in the classroom and on the field,” LSU coach Ed Orgeron said. “Winning a national championship and graduating are what we strive for on a daily basis. Our goal is to give our players every opportunity and advantage to win championships on the field and get an outstanding LSU education off the field.

“We are very proud of all of our players that were either drafted or signed a free agent contract over the weekend. Our goal continues to bring high-character young men to LSU that will win championships, while also getting a great LSU education.”

LSU tied the all-time record with 14 players selected in the NFL Draft and then added another six free agent signings. Every draft-eligible player from LSU’s 15-0 team in 2019 is currently with an NFL team, the first time in school history that’s happened in a single year.

Eleven of LSU’s 12 players from the 2019 team that were with the program though their senior season, earned their college degree and were either drafted or signed a free agent contract last weekend.

“This is fitting of a program that truly excels in all facets of the student-athlete experience,” LSU Director of Athletics Scott Woodward said. “For these student-athletes to win a national championship, earn their degree and make their way to the NFL in the same year takes elite-level commitment from the entire program and hard work and dedication from the student-athletes. I am so proud of these men, Coach O and his staff along with our entire team at the Cox Communications Academic Center.”

Headlining the graduate list for LSU is Heisman Trophy quarterback Joe Burrow, who was selected No. 1 overall by the Cincinnati Bengals and graduated LSU with a master’s degree in December. Burrow is joined on LSU’s list of graduates with a master’s degree by long snapper Blake Ferguson, who was picked in the sixth round by the Miami Dolphins. Ferguson graduated in three years with an undergraduate degree in marketing and then followed that two years later with a master’s in business administration.

Offensive guard Damien Lewis, who was picked in the third round by the Seattle Seahawks, is one course shy (three hours) of earning his LSU degree. Lewis, who started 28 straight games at right guard for the Tigers in 2018 and 2019, is expected to graduate over the summer.

“We are extremely proud of our young men and their continued success,” Executive Director of the Cox Communications Academic Center for Student-Athletes Walt Holliday said. “There is a direct correlation between the success that we have achieved on the field and the success the football team is having in the classroom. It speaks to their overall commitment to the program, their ability to set goals for themselves and to see it through. Coach O’s full measure of success is Graduation and Championships.

“Our continued academic success in football is based on the collective efforts of many. Our football character development program SWAG (Students with a Game plan) which is directed by Calvin Marshall, has been a key element to the maturation process of our football student-athletes. We are able to bring in community leaders, campus leaders and other influential people to educate, inform and connect with our student-athletes. Through these relationships they are able to navigate the college experience. When you really breakdown graduation, you are talking about relationships”