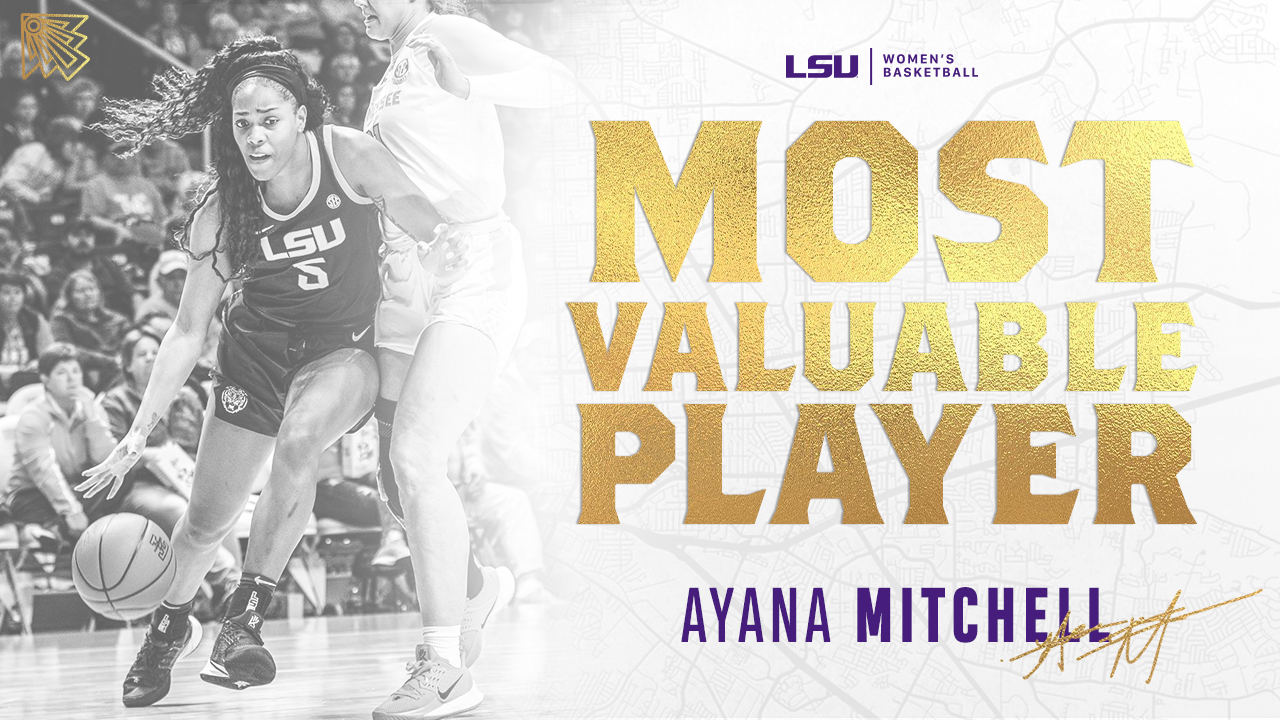 Redshirt senior Ayana Mitchell was named the team’s Most Valuable Player for the second year in a row. Last season, the forward from Conyers, Georgia, was also the Offensive Player of the Year after earning Most Improved honors as a sophomore. Mitchell was recently named Co-Player of the Year by the LSWA. It was also Mitchell’s second season in a row to earn First Team accolades from the state media association. Mitchell averaged 13.0 points, 8.5 rebounds and 1.3 steals per game before having her season cut short on February 2 with a knee injury. Her 67.9 field goal percentage led the league and ranked third in the nation at the time. She posted nine double-doubles in 22 games played and became just the fifth LSU player to record 1,000 career points and 900 career rebounds. Mitchell was named All-SEC Second Team and named to the SEC Community Service Team. She was one of 10 finalists for the Katrina McClain Award and a Top-30 candidate for the Senior CLASS Award. This season she was also on watch lists for the John R. Wooden Award and the Naismith Trophy. Mitchell will also receive the L Club Team Captain Award for the second season.

“Ayana is the epitome of the perfect teammate,” said Fargas. “She has done it all as a leader in the LSU women’s basketball program, from improving her game to being a role model in the community. Ayana is the prime example of what it takes to be an LSU Tiger.”

Junior Khayla Pointer earned the Offensive Player of the Year award this season, after being named Co-Most Improved as a sophomore. Pointer, a guard from Marietta, Georgia, led LSU with 14.8 points and 4.8 assists per game. She has been the ironwoman of the team averaging 32.7 minutes per game, including a stretch in early February of three consecutive 40-minute games. She was the top free throw shooter on the team with a 71.6 percentage from the charity stripe and led the team with 2.1 steals per game. The All-SEC Second Team honoree earned her 900th career point on March 1 and dished out her 300th career assist on February 13.

“Khayla is our engine on offense,” said Fargas about her starting point guard. “We can always count on her to drive the offense through her scoring and play-making.”

Redshirt junior Faustine Aifuwa was selected as the team’s Defensive Player of the Year. She was the Co-Most Improved Player of the Year in 2018-19. Aifuwa, a center from Dacula, Georgia, was LSU’s top shot blocker with 2.1 per game and top rebounder since the injury to Mitchell with 7.9 rebounds per game. An All-SEC Defensive Team selection, she led the team in defensive rebounds with 5.6 per game. She was the third-leading scorer with 10.9 points per game. Earlier in the season, Aifuwa became LSU’s eighth player to record 100 career blocked shots, while earning her 700th career point and 500th career rebound late in the season.

“Faustine has really upped her game in the post” said Fargas about her top defensive player. “She is a force to be reckoned with and is a game-changer when challenged in the paint.”

Junior Awa Trasi was named the team’s Newcomer of the Year. The transfer from Northwest Florida State College averaged 6.5 points and 3.7 rebounds per game for the Tigers. The native of Toulouse, France moved into the starting lineup over the last nine games of the season to take over for the injured Mitchell. Over that stretch, she averaged 10.4 points and 4.8 rebounds per game, including a game-high 22 points in a win over nationally-ranked Tennessee.

“Awa made a significant impact on our season this year,” continued Fargas. “She was a solid player off the bench, then really stepped up when Ayana went down, keeping us on track as we closed out the year.”

Senior Associate Director of Academic Affairs Carole Walker was recognized with the Sue Gunter Award for significant contributions to the betterment of LSU women’s basketball and serving as an inspirational role model for the LSU community.

“Carole is an outstanding role model for our young ladies,” said Fargas about the team’s long-time academic advisor. “Her hard work to ensure that our players are staying on task with their academics is second to none.”

LSU finished the season with a 20-10 record overall and 9-7 in SEC play. It was the fifth 20-win season of Fargas’ tenure and the first time since the 2012-13 season that LSU won five games against Top-25 opponents.