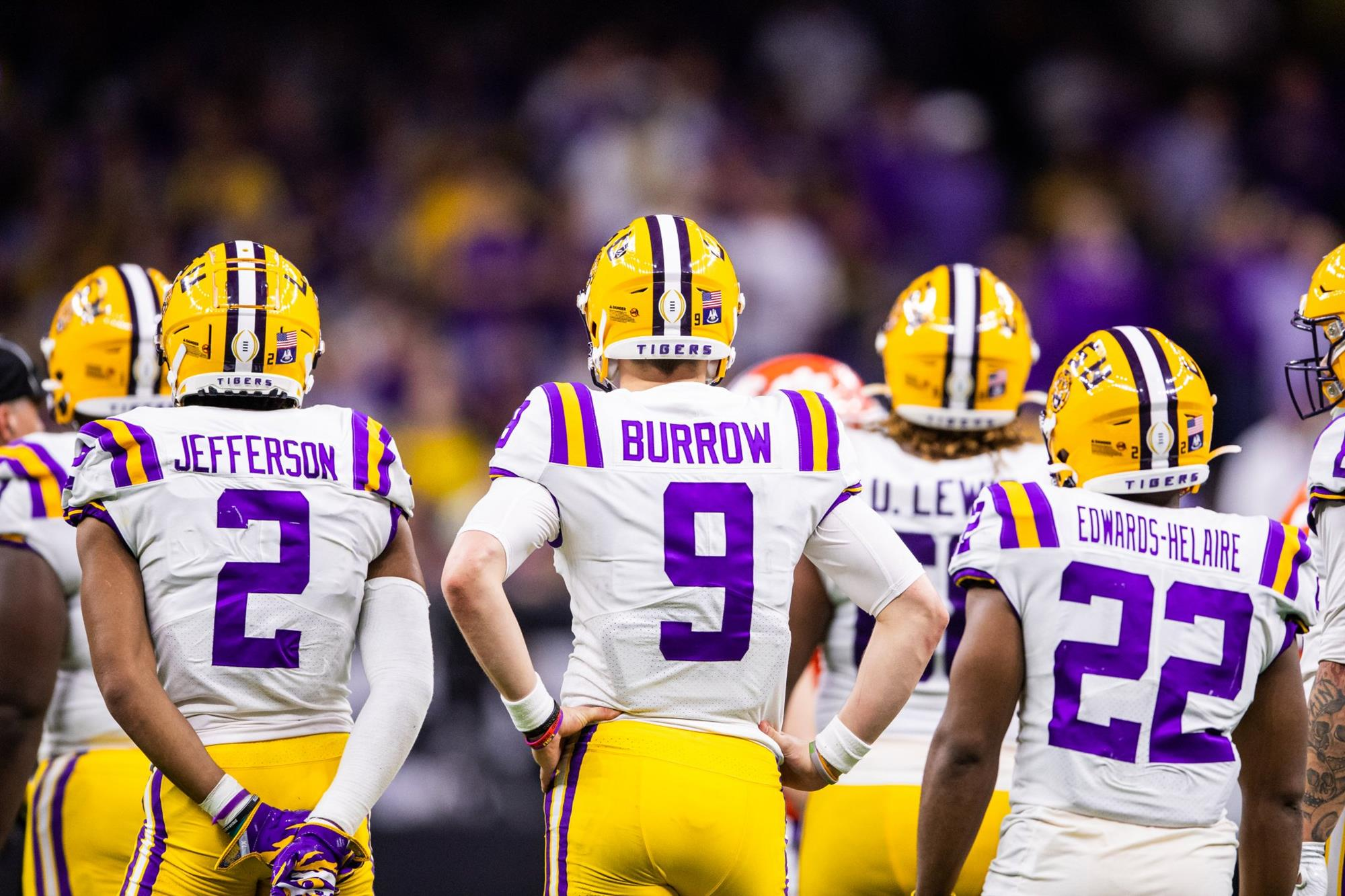 The 2019 LSU Tigers had a knack for breaking records. But on Thursday night at the NFL Draft, they decided to shatter one more for good measure.

Beginning with quarterback Joe Burrow and ending with running back Clyde Edwards-Helaire, the Tigers set a new school-record with five first-round selections, more than any other school in college football.

Burrow joined exclusive company right off the jump, joining Cam Newton as the only two players in college football history to win the Heisman Trophy, the National Championship and become the No. 1 overall pick in sequence. But none of the three had any suspense behind it.

Like Burrow mentioned, the Cincinnati Bengals picked first for a reason. But that doesn’t mean he’s altering his standards one bit. That’s not in his DNA. That’s not who he is.

“No, you don’t mentally adjust,” Burrow said emphatically to the media after being drafted. “You don’t sacrifice your standards for anything. You go into the season saying we’re going to work really hard and win a lot of football games.”

After a small interlude, it didn’t take long for LSU to make their presence felt in a big way.

Edge-rusher K’Lavon Chaisson was the second Tiger off the board to the Jacksonville Jaguars with the No. 20 overall pick.

Chaisson’s career in Baton Rouge symbolized resiliency. After tearing his ACL in the 2018 opener against Miami, he attacked his rehab with unrelenting resolve. When he battled some injuries again early in 2019, he became a vocal leader, a teacher and mentor to the younger players, as well as the team’s biggest supporter from the sideline. He’s the ultimate package.

Nevertheless, when the lights shined brightest, so did Chaisson. Against Alabama, he totaled a team-leading 10 tackles. At home vs. Texas A&M, he tallied 6 tackles and 1.5 sacks. And in the Peach Bowl against Oklahoma, he was all over the field with six tackles and two sacks.

Maybe his best attribute? He speaks three languages. He can rush the passer. He can drop in coverage. He can play the run. He’s a swiss army knife that can make an impact in many ways.

“I feel like I can make an impact if you put me at guard,” Chaisson said jokingly after getting picked. “Put me at center. That’s just who I am. I’ve never really been about the personal accolades. I have a thing about being a better teammate than being a better player.”

Two picks later, it was Justin Jefferson who was next off the board, going the No. 22 overall to the Minnesota Vikings. He says he won’t have to change cleats. He’ll still be repping purple and gold, even if it’s 1,190 miles away from Tiger Stadium.

Jefferson’s resumé speaks for itself. Stepping on campus as a two-star prospect and the brother of former quarterback Jordan Jefferson, he would go on to become one of the most explosive wideouts in LSU history, setting a school record with 111 receptions in 2019.

To put his career into perspective, Jefferson totaled 22 more catches, 75 more yards, and double the touchdowns (24) as Odell Beckham Jr. when he was in school from 2011-2013.

The two draw similarities and comparisons in many different ways, but both having a stud receiver alongside them might be the biggest one. For Beckham Jr., it was Jarvis Landry. For Jefferson, it was Ja’Marr Chase. And both duos fed off one another, making each other better.

“Playing alongside Ja’Marr [Chase] just helped me compete,” Jefferson said. “Trying to outdo him every single practice and him trying to outdo me. It helped us on Saturdays.”

Shortly following Jefferson, it was junior linebacker and Livonia native Patrick Queen who was next off the board, going No. 28 overall to the Baltimore Ravens.

Queen was the most improved player in Dave Aranda’s defense by a wide margin. From not being a starter in the season opener, to being named the National Championship Game Defensive MVP, it proved that in the biggest games, he played his best football, and that’s why his stock rose faster and higher than any player in recent memory.

“I feel like I’m going to bring everything to the table,” Queen told reporters. “The [Ravens] defense is known for passion and aggression. There’s no one piece of my game, I bring it all.”

Finishing third on the team in 2019 with 85 tackles and 3 sacks, Queen played his best football down the stretch. His interception against Alabama was arguably the most important play of the game, and his 8 tackles against Clemson was key to securing the national championship victory.

Recruited originally as a high school tailback, Queen was mentored by All-American and Butkus Award winner Devin White, later serving as the same type of mentor for linebackers under him like Micah Baskerville and Donte Starks.

“He was a high school tailback and linebacker, just like Devin White,” said head coach Ed Orgeron. “He just kept getting better and better. Everytime we put him in, he made plays. He kept improving, one game at a time. At the end, he became one heck of a football player.”

And on a night that opened with an LSU Tiger, it ended with one too, as Edwards-Helaire was selected with the final pick of the first round to the Super Bowl Champion Kansas City Chiefs.

Chiefs general manager Brett Veach spoke very highly of Edwards-Helaire in a conference call after the draft, raving about his interior running ability, his lateral agility and vision, and even drew comparisons to Brian Westbrook, except Veach thought Edwards-Helaire will be better.

“That’s no slight against Brian,” Veach said. “[Clyde] is just explosive. His vision and instincts are rare and unique. He has the ability to play the game in slow motion. He can consistently make plays when there’s nothing there to be made.”

One aspect the Chiefs love about Edwards-Helaire is ability to make plays in the passing game. He became the first back in SEC history with 1,000 yards rushing and 50 receptions in a season, and his selection made LSU the first team in draft history to have a quarterback, receiver, and running back drafted in the first round of the same draft.

“I was on the same team as Derrius Guice in high school,” Edwards-Helaire said. “Him being on the field his senior year was a must in high school, so I had to find a way on the field, so I started playing slot. Ultimately, it was something that was always a part of my DNA, and LSU took complete advantage of it.”

Edwards-Helaire lives by one motto when he plays football: If you throw your heart across the line your body will follow. At 5-foot-8, 250-pounds, he runs like someone whose heart can’t be measured. And all signs point to that continuing at the professional level with the Chiefs.