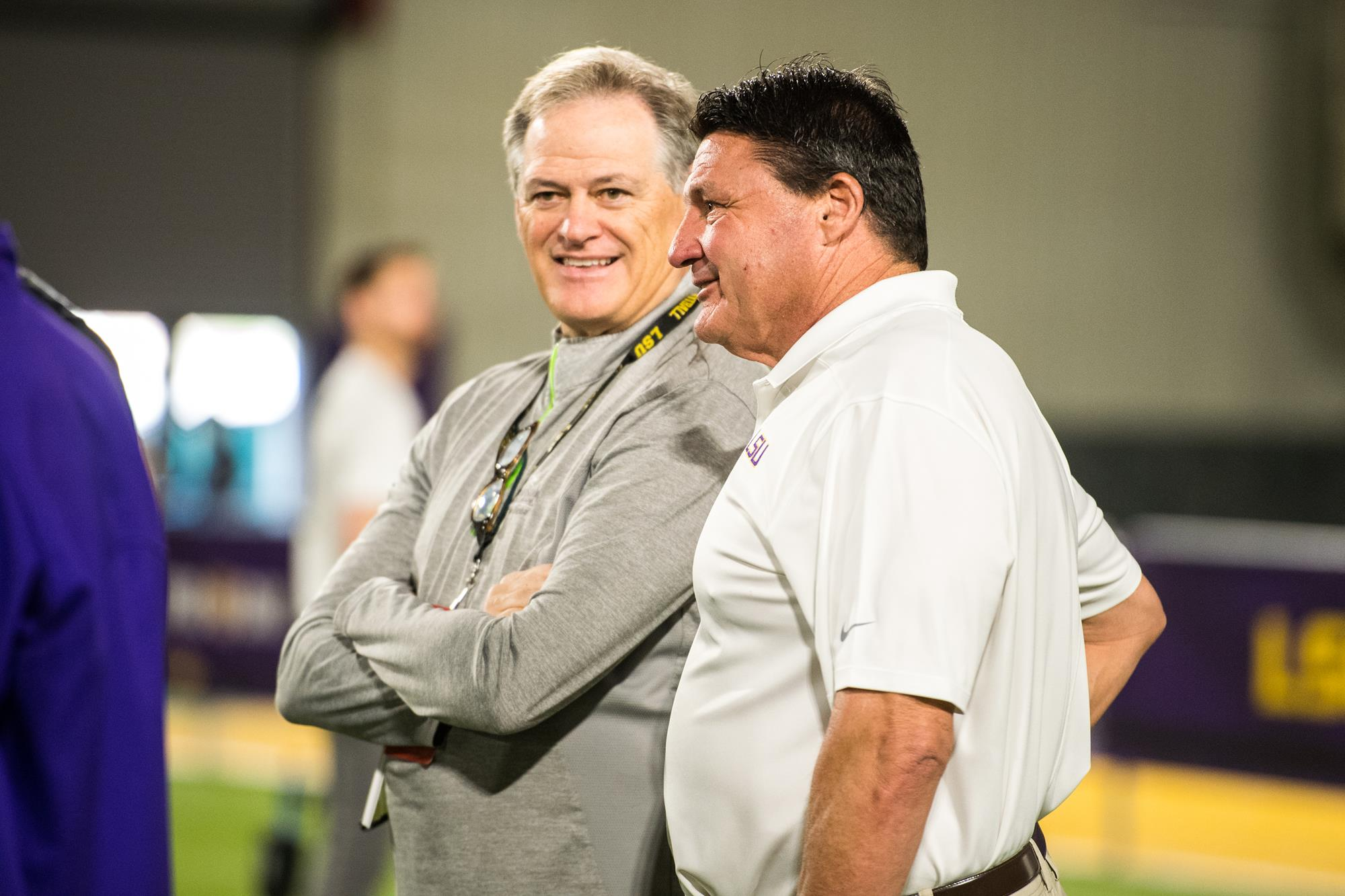 In between Zoom meetings with his staff and players and plenty of recruiting, Ed Orgeron‘s watched, in his own words, “too much television.” He likes “Peyton’s Places” with Peyton Manning. He likes watching replays of his 2019 championship team, too.  Mostly, though, he’s sick of flipping through the channels. He’s ready to get back to work.

This weekend might offer one final exception, however, as the 2020 NFL Draft starts Thursday with a chance for yet another record-breaking performance for Orgeron’s program. After re-writing the school, conference, and national record books in 2019, the Tigers have a chance to set a new mark for players selected from a single school in the draft, with as many as 16 ex-LSU standouts set for selection.

“That and 50 cents will get you a cup of coffee tomorrow,” Orgeron joked.

His poker face didn’t hold for long, because while he’s focused on 2020 and getting his team ready through the challenges of the COVID-19 lockdown, Orgeron also knows what it will mean to see so many championship-winning Tigers taken Thursday, Friday, and Saturday.

“It means a lot,” Orgeron said. “It means development. It means recruiting great character kids. It means a lot in recruiting. The reason you come to school at LSU is because you want to win the national championship, you want to graduate, and you want to get drafted. Now, it’s not like we’re presenting a plan to the parents. This is what we’re going to do, this is the results that’s going to happen if we put in the right amount of work. It adds validity to your program.”

The program needs little additional validity, given its recent run on hardware. The same applies for quarterback Joe Burrow, likely to be taken No. 1 overall by the Cincinnati Bengals on Thursday. The Ohio native could step into a tricky situation for his home state team. The Bengals have had four straight losing seasons and haven’t won a playoff game since 1990, six years before Burrow was born. Orgeron knows it will be a challenge for his former quarterback, but he knows what Burrow does in the face of adversity, too.

“Joe didn’t play for three years, and he came here and earned the respect of the football team,” Orgeron said. “Joe wasn’t the Heisman Trophy winner when he got here. He developed, he got better, he kept his mouth shut.

“I think Joe has not had a silver spoon in his mouth all his life. Joe’s had to fight all his life. If he does have to fight, he’s willing to fight and build a team and go through adversity if he has to. Nothing was promised to him here. He came here with faith and built a championship team. I don’t see why not he couldn’t do it in Cincinnati.”

Burrow’s backfield mate, running back Clyde Edwards-Helaire, is equally familiar with overcoming long odds. The Baton Rouge native could be one of the first running backs off the board this weekend, with a Round 2 projection at NFL.com and The Draft Network’s Jordan Reid tweeting earlier this week that Edweards-Helaire’s “stock is soaring.”

Orgeron can see why. So can anyone who watched tape of Edwards-Helaire’s performance against Alabama: 180 yards of total offense and four touchdowns. In 2019, he became the first player in SEC history with 1,000 yards rushing and 50 receptions in the same season.

As many Tigers that have been taken in the first round in recent years, it’s hard to believe the New Orleans Saints have never selected an LSU player in the first round. Orgeron, a former assistant with the Saints, is close with Sean Payton and GM Mickey Loomis, and players like receiver Justin Jefferson, cornerback Kristian Fulton, and Queen could all be available when the Saints select at No. 24.

“Maybe. Maybe,” Orgeron said if this could be the year a Tiger becomes a Saint in round one. “I know I’ve gotten a lot of calls from those guys. They definitely love the culture of our program. They like the character of our football team. Sean Payton and Mickey have a lot of respect for what we’re doing here. A lot of the Saints program and culture is going on right here at LSU. Hopefully you’ll see the first year LSU gets a first-round pick to the Saints. I’d love to see that.”

Here are a few more remarks from Orgeron during a Tuesday teleconference.

“He was a tailback and linebacker, just like Devin White. He came, got bigger and stronger, learned the defense, just got better and better. Every time we put him in there, he made plays. He kept on improving, one game at a time. At the end, he became one heck of a football player. He’s a high character kid. We wish him the best.”

“Night and day. It’s one of the best transformations I’ve ever seen in a young man. He made a decision to get in tremendous shape and commit himself to football completely, and look at the year he had. I don’t think he missed one practice last year.”

“Work ethic. Off the charts character. We knew one of the coaches at Northwest (Mississippi Community College). They brought us in the office and said, ‘Coach, you’ll never ever coach a better young man.’ They were exactly right.”

On transfer Jabrill Cox, a linebacker for the 2020 Tigers…