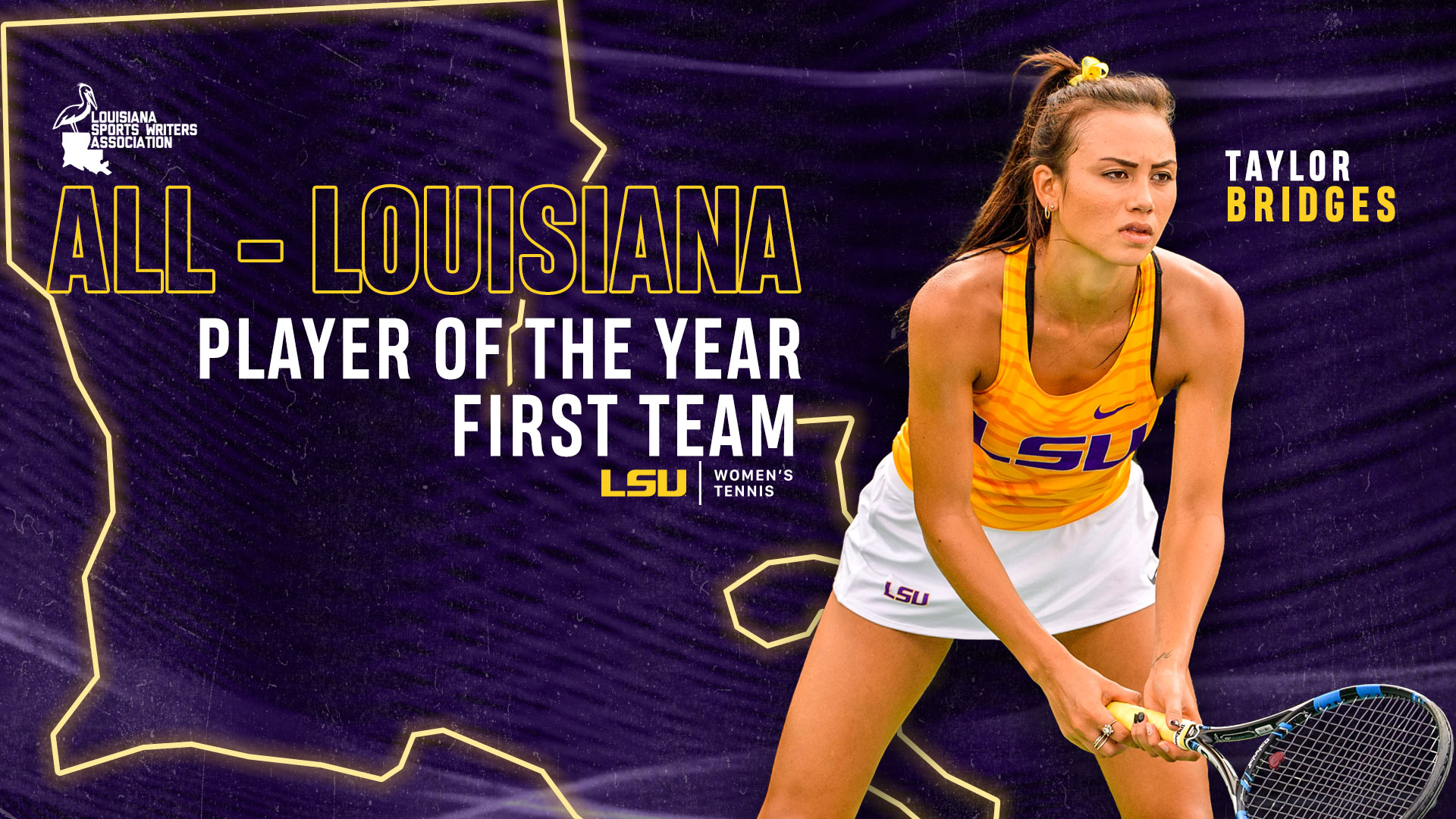 “We are humbled and thrilled,” co-head coach Michael Sell said. “The players hard work all season is shown with these recognitions for the All-Louisiana teams against very strong in-state competition.”

Bridges started off 2019-20 with a strong fall campaign, posting a 9-3 tournament record and was the 2019 ITA Southern Regional Singles Champion. In the spring, the Mesa, Arizona native earned a 7-3 singles record playing on the No. 1 court, as well as a perfect 4-0 start to doubles play. Bridges maintained a spot in the ITA Singles Rankings all spring, rising as high as No. 33 in the nation.

Julia and Michael Sell take home Coach of the Year honors for the second consecutive season. In their fifth season together as co-head coaches, the Sells finished the regular season with a 10-3 record. LSU earned big wins in the spring, such as a 4-3 win at No. 20 Vanderbilt to open the SEC season. The win was the Tigers first Top 25 victory of the season, and first win over Vanderbilt since 1997. The Tigers also earned a 4-2 win at No. 38 Florida, which was only the second win against the Gators in program history, and first since 2009. Under the Sells, the Purple & Gold finished the season ranked No. 21 as a team, and featured two individuals and one doubles team ranked in the ITA Individual Rankings.

Junior Eden Richardson joined Bridges on the All-Louisiana first team for the third consecutive season. In singles, Richardson earned a team-high ten wins in the dual season, only dropping one match while playing at the No. 3 spot for the Tigers. In doubles, Richardson and partner Nina Geissler posted an 8-3 record in the dual season playing at the No. 1 spot, and were ranked No. 26 in the ITA Doubles Rankings before the season concluded.

Freshman Safiya Carrington’s strong debut season earned her a spot on the All-Louisiana second team. Carrington joined the Tigers in the fall and became a big player early, grabbing nine singles wins across three tournaments. In the spring, Carrington posted a 6-4 singles record playing at the No. 2 for the Purple & Gold. The freshman was ever-present in the ITA Singles Rankings during the spring, rising as high as No. 57.

Carrington was joined by fellow freshman Nina Geissler on the second team. Geissler enjoyed a solid debut season at LSU, earning fourteen wins in singles competition. In the spring, Geissler posted a 7-2 singles record playing at the No. 5, with all wins coming in straight sets. In doubles, Geissler teamed with Richardson to play at the No. 1 for LSU, with the duo having earned an 8-3 record in the dual season. The tandem was ranked No. 26 in the ITA Doubles Rankings before the season concluded.