Elite 2020 Class Gives Will Wade Hope for "Best Team" Yet

by Cody Worsham | Digital Media Reporter
Boot Up Podcast: Will Wade on 2020 Class +0 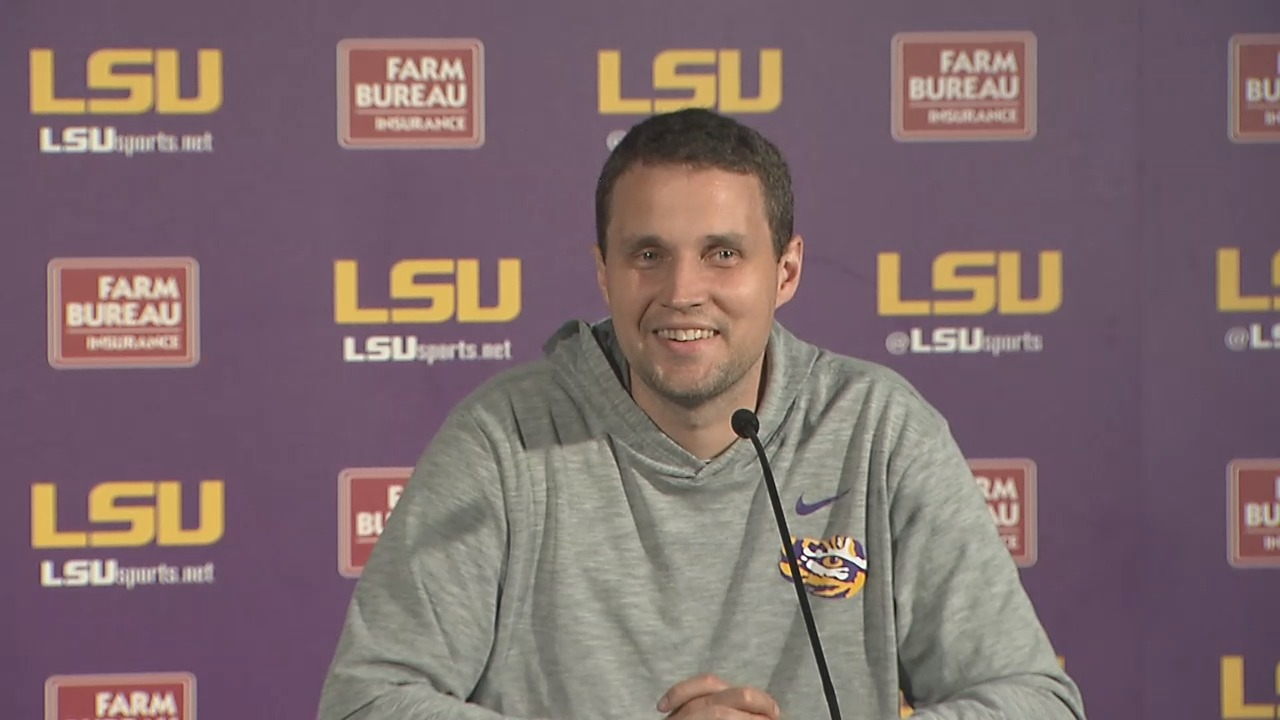 Will Wade has allocated his time in social distancing wisely. He’s extended his run streak – a mile a day, every day – ever closer to 2,000. He’s read five books and polished up all but one game on the Tigers’ 2020-21 schedule. He’s even put his degree as an educator to use, taking over preschool instruction duties for his daughter in the morning.

All that, and he’s put together another top-five recruiting class for 2020.

That group, already loaded after a successful fall haul, added even more quality on Wednesday, after three new players became Tigers and pushed the class to fifth nationally per 247Sports.

“I’m excited,” Wade said on the latest episode of Boot Up: The LSU Basketball Podcast. “I feel like we’re going to have our best team since we’ve been here. I feel good about the [recruiting class] we’ve got, I feel good about what we’re going to have coming back. We have a good mix of experience and talented, talented newcomers. And so I think we’ve got a chance, if we close this [class] out right, to have one of our best teams here.”

Wade said LSU in still in the mix to add another big body to the seven-man group – “we need to get one or two more big guys, and we’ll be set” – but added that the class already assembled has a chance to contribute immediately, in the frontcourt and backcourt.

Here’s a player-by-player look at the 2020 LSU Basketball class, as assembled thus far. (Players are listed in alphabetical order).

Cook will be familiar to LSU fans in the Baton Rouge area. The 6-foot, 180 pound point guard from Walker High School was the 2019 Louisiana Mr. Basketball as a junior and averaged 29.5 points per game as a senior.

“Cook’s been working extremely hard,” Wade said. “He’s been doing all the workouts (LSU Strength) Coach (Greg) Golden has sent. He’s an elite level competitor, somebody who’s a winner. He’s going to be able to come in and help us early. He’s got a good body, he’s sharp, he’s going to be able to pick up what we’re doing quickly.”

On the floor, Cook is a scoring guard who can fill it up from deep. He shot 40 percent from 3 on the Under Armour Association circuit last season, hitting 32 of 80 attempts.

“He shoots it really well,” Wade said. “He’s the leading three point shooter on the Under Armour circuit, and he can get in that paint and spray it out and make other guys better. I think eventually down the road, maybe a year or two, I think we could have just one of the elite back courts in the country with Cook and (Eric) Gaines playing together back there.”

A three-star California native with plenty of size and strength, Ezewiro held offers from USC, Arizona State, and Tennessee, but LSU landed a prospect who projects as an elite rebounder.

“We’ve got to get him in shape,” Wade said. “He’s a big body. It’s like I told our staff, I said there’s not but eight to 10 kids in the country that look like him. So it’s on us to mold him and get him better. We can hopefully turn him into a rebounding machine. That’s what we need from him.”

Ezewiro played his senior season at Oak Hill, joining the program from Bishop Montgomery High School in Torrance, Calif. Last summer, he averaged 8.6 points and 3.6 rebounds per game on the EYBL circuit, but elevated those numbers to 13.4 point and 8.8 rebounds per game at the Peach Jam Invitational.

Four-star point guard Eric Gaines (@EricDaGoat) is set to be a Tiger!#BootUp ??

Long, skilled and explosive, Gaines might be one of the most underrated prospects in the 2020 class – even if 247Sports ranks him as a top-100 player nationally. If not for an injury during last summer’s EYBL season, Gaines might be ranked even higher.

“He’s electric,” Wade said. “That first (EYBL) session, he averaged 19 points and six assists. It was off the charts what he was doing.”

Gaines worked with a trainer who has a longstanding relationship with Wade and assistant coach Bill Armstrong. Before Gaines emerged as a nationally-ranked prospect, his trainer contacted Armstrong and Wade to alert them of his talents.

“He does a great job getting in the paint,” Wade said. “He’s got a little flair to his game. He’s not going to go in there and lay it in. He’s going to half cock it behind his back and make it look good. I told Bill, ‘We may have to take a little bit of mustard off the hotdog. But not too much.'”

Wednesday afternoon, Gaines held a signing event at his home with his family. Wearing masks, they signed in front of his house as friends and fans watched from the street in their cars.

“He’s somebody whose best basketball is ahead of him,” Wade said. “He’s going to need to get stronger, but he’s long, he’s got great defensive instincts, and he’s got great court vision. He can kind of make those passes like Tremont (Waters) could. He sees things. We’re very, very excited about him.”

A former four-star prospect in the 2018 recruiting class, LeBlanc – who prepped at Madison Prep in Baton Rouge – transferred midway through the 2019-20 season and immediately made his mark on LSU’s scout team.

“If we would’ve had him, we probably would have won two or three more games this year,” Wade said. “He can protect the rim, he’s long, he’s athletic. He flies around the court. He’s going to be a really, really good player for us.”

One feature of this class is how much defensive talent LSU brings in. Wade noted the two-way talents of Mwani Wilkinson and Gaines, in particular, but LeBlanc is the best of the bunch defensively.

Shareef O’Neal will look good in Purple and Gold!#BootUp ??

Another transfer pickup Wednesday is a name LSU fans – basketball fans anywhere, really – will recognize. Shareef O’Neal, son of LSU and NBA legend Shaquille, completed his transfer from UCLA. A sophomore-to-be, O’Neal missed the 2018-19 season after undergoing heart surgery, before playing 13 games for UCLA in 2019-20.

Obviously, following in his father’s footsteps presents a different challenge, but Shareef is a different player than his father. At 6-foot-9, 215 pounds, he’s less of a space eater and more of a floor spacer, ala Naz Reid and Darius Days. O’Neal is fully cleared to play after his heart surgery. All that’s left is to grow into his game and his confidence.

“It’s like we told him, ‘You’re going to make your own name here,'” Wade said. “Shaq’s really excited. He was excited for him to come here. He’s excited to see where things go.”

Something to keep an eye on with both O’Neal and LeBlanc: the NCAA is set to vote on a one-time transfer waiver on May 20, according to reports. If that passes, it could go into effect immediately and make all transfers eligible for the 2020-2021 season. (Note: I did not ask Wade about when he expects O’Neal or LeBlanc to become eligible.)

The highest-ranked player in the 2020 class for the Tigers, Thomas is a five-star scoring machine who will look to pick up where Skylar Mays left off as a true freshman.

Thomas has been running the track at a high school near his house, “working his tail off,” Wade said.

“He’s an elite, elite scorer,” Wade said. “He’s as good a scorer as you could get. He’s a bucket. He’s going to average a lot of points. There’s going to be three, four, five games next year where he goes for 30-plus and you don’t even blink.”

Thomas fits right into LSU’s offensive system. A 6-foot-4 scoring guard, he left prestigious Oak Hill as the program’s all-time leading scorer, over the likes of Carmelo Anthony, Jerry Stackhouse. Thomas averaged 29.5 points per game on the EYBL circuit last spring, shooting 36 percent from 3 and living at the free throw line, where he made a circuit-best 160 of 185 attempts (86.5%) in 20 games. (Note: the only players to attempt more free throws in EYBL since 2015 include Allonzo Trier, Isaiah Briscoe, Collin Sexton, Jayson Tatum, Marvin Bagley, Cole Anthony, Caleb Swanigan, and Simi Shittu).

Marlon Taylor’s exodus leaves a hole in LSU’s roster for a high-flying, uber-athletic forward, and Wilkinson is set to fill that void.

A 6-foot-6, 190 pound wing from Las Vegas, Wilkinson was ranked No. 86 in the country by ESPN, averaging 19 points, 10 rebounds, four blocks, and two steals per game as a senior at Bishop Gorman. There, he won four straight state titles.

His family has roots in Louisiana, and both of his brothers played college football – one at Colorado State, the other at Northern Arizona.

Wilkinson is just 17 years old, and he drives 45 minutes every morning to work out with his trainer at Bishop Gorman at 5:30 a.m.

“He’s won four straight state titles,” Wade said. “He’s a winner. His AAU team wins. His best basketball is ahead of him.”