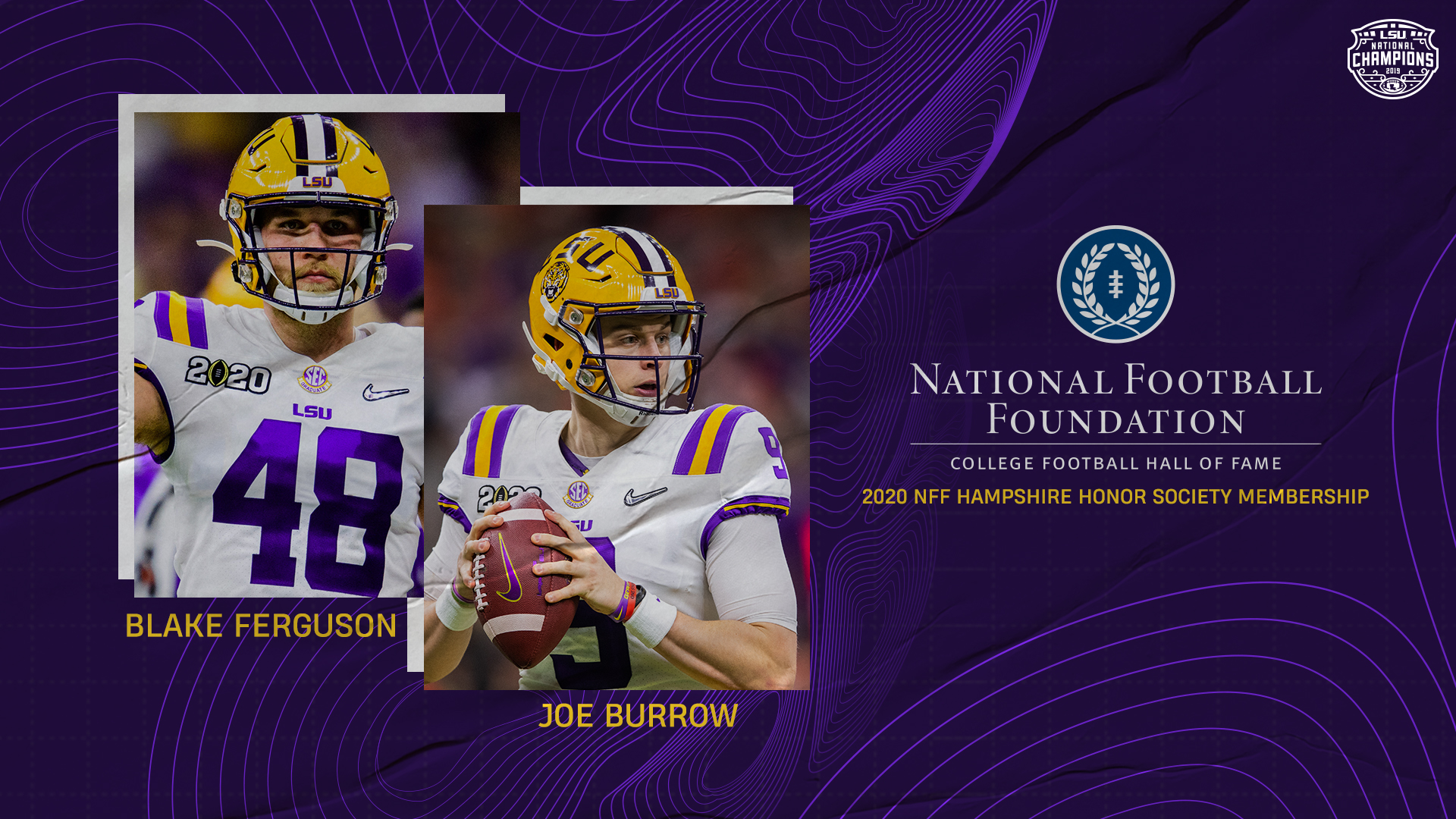 BATON ROUGE – LSU’s Heisman Trophy winning quarterback Joe Burrow and long snapper Blake Ferguson have been named to the 2020 NFF Hampshire Honor Society, which is comprised of college football players from all divisions of play who each maintained a cumulative 3.2 GPA or better throughout their college careers, the National Football Foundation announced on Wednesday.

A total of 1,432 players from 364 schools qualified for membership in the Society’s 14th year.

?”We are pleased to honor another impressive group of athletes as part of this year’s Hampshire Honor Society,” said NFF President & CEO Steve Hatchell. “For more than a decade, the Hampshire Honor Society has served as a powerful vehicle for schools to recognize their college football players who have distinguished themselves both academically and athletically, and we congratulate the schools and each of these young men for their commitment to excellence in all aspects of their lives.”?

Burrow, who is expected to be selected No. 1 overall on Thursday night in the NFL Draft, earned his master’s degree from LSU in December. Burrow led LSU to a 15-0 overall mark and the national championship in 2019. He graduated with a 3.223 grade point average in liberal arts.

Burrow, who is a two-time member of the SEC Academic Honor Roll as well as being the 2019 SEC Offensive Player of the Year, capped his LSU career as the most decorated football player in school history. He set the NCAA single-season record for TD passes (60) and TDs accounted for (65) on his way to the most prolific passing season in SEC history.

Ferguson, a four-year starter at long snapper for the Tigers, graduated with a Master’s in Business Administration in December with a 3.857 grade point average. Ferguson is a four-time member of the SEC Academic Honor Roll and a two-time permanent team captain. Ferguson’s career also includes a two-year stint as chair of the SEC Football Leadership Council.

?The NFF Hampshire Honor Society capitalizes on the NFF’s National Scholar-Athlete program by greatly expanding the number of scholar-athletes the NFF can recognize each year. The program further strengthens the organization’s leadership role in encouraging academic performance by the student-athletes at the 775 colleges and universities with football programs nationwide. The initiative has now honored 12,127 student-athletes since its inception.

Jon F. Hanson, the chairman and founder of The Hampshire Companies, provided the endowment to launch the NFF Hampshire Honor Society in 2007. He made the contribution as part of his legacy to the organization after serving as NFF Chairman from 1994-2006. He currently serves the organization as chairman emeritus. Each player awarded with membership in this year’s Honor Society will receive a certificate commemorating his or her achievement.

“It was my great privilege to endow the NFF Hampshire Honor Society, which has greatly increased the number of college student-athletes the NFF has been able to recognize during the past 14 years,” said Hanson. “Nationwide there are thousands of football players excelling in the classroom, and they are going on to become great leaders. The NFF Hampshire Honor Society continues to grow and allows us to shine a light on their hard work.”??”We have honored more than 12,000 student-athletes in the last 14 years thanks to Jon Hanson’s generosity,” said NFF Chairman Archie Manning. “We are grateful for his passionate belief in the scholar-athlete ideal, and the Hampshire Honor Society allows us to showcase the names of tomorrow’s leaders while inspiring future generations to follow in their footsteps.” ??

Nominated by their respective schools, members of the NFF Hampshire Honor Society must have:
•    Completed their final year of playing eligibility in 2019;
?    Graduated players, who have remaining eligibility but will not return to collegiate play (e.g. declared for NFL Draft or retired from football), may also be nominated.
•    Achieved a 3.2 cumulative grade point average throughout entire course of undergraduate study;
•    Met all NCAA- or NAIA-mandated progress toward degree requirements; and
•    Been starters or significant contributors throughout the 2019 season.