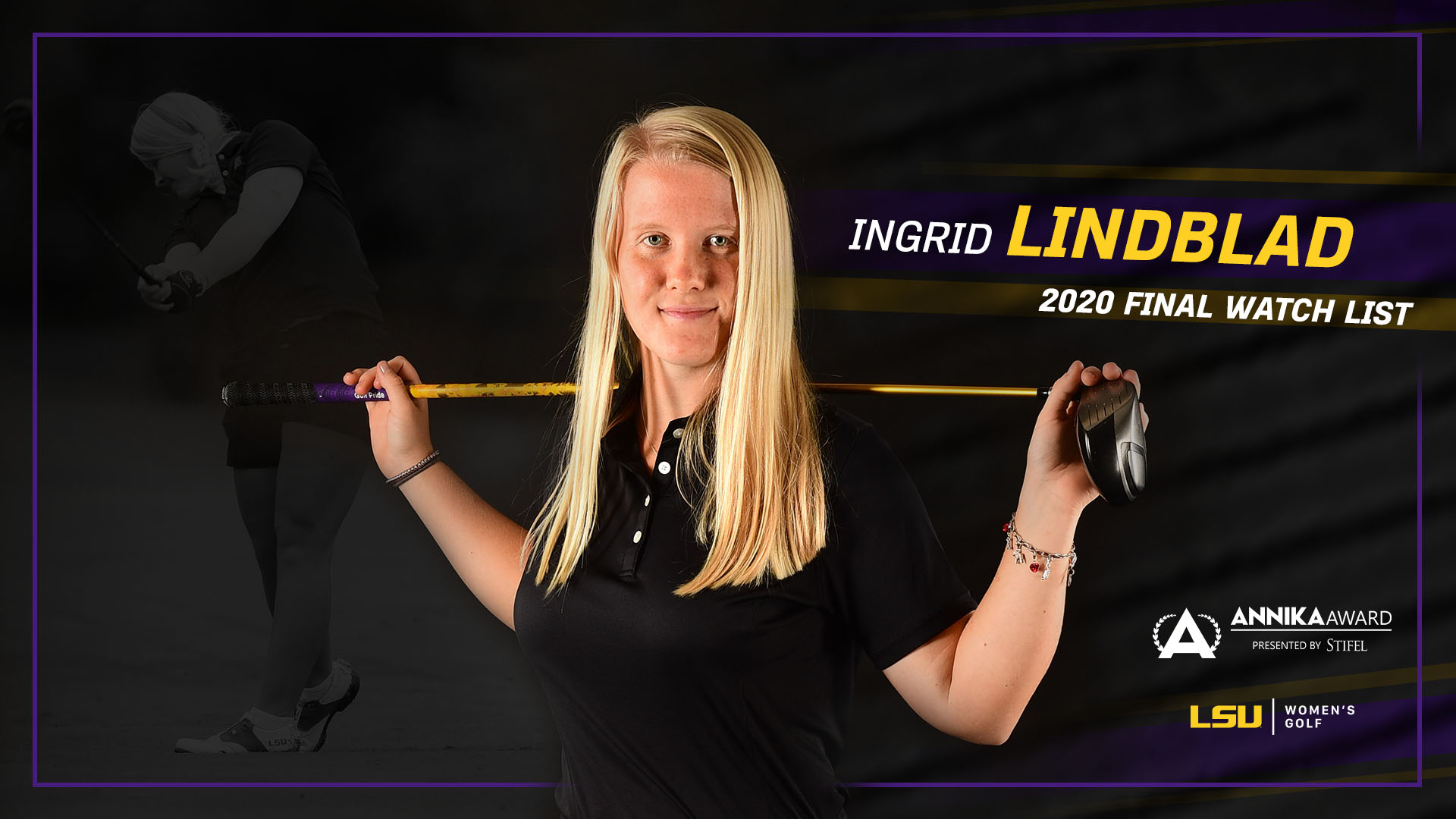 BATON ROUGE — LSU freshmen Ingrid Lindblad is on the ANNIKA Award Final Watch List of the 2019-20 season as announced this morning by Golfweek and on the Golf Channel.

Lindblad is one of 10 finalists for the 2019-20 ANNIKA Award. The ANNIKA Award presented by Stifel is given annually to the top female collegiate golfer. The winner is voted on by players, coaches and members of the golf media.

Lindblad, a native of Halmstad, Sweden, is the second LSU Tiger to be named to the Watch List in the seven seasons of the award program and entered the watch list on Friday, March 6. Alumna Madelene Sagstrom, also from Sweden, was a finalist for the award in 2015.

“Any time your name is associated with Annika Sörenstam in women’s golf, it usually means you did something great,” said LSU head coach Garrett Runion. “And being from Sweden, just like Annika, makes it even more special for Ingrid to be up for this honor.

“Ingrid is an extremely hard worker and has been like that for a long time before she joined our team at LSU. She has never mentioned individual awards. She has always been team-oriented and wants the team to win first. But I know she is very excited to be named one of 10 finalists on the ANNIKA Final Watch List. With almost 70 percent of her rounds at par or under during this shortened season, she is definitely a worthy candidate.”

In addition to recognition by the ANNIKA Award, Lindblad received an invitation to the 2020 Augusta National Women’s Amateur and was selected to the International Team for the 2020 Palmer Cup. She also earned SEC honors for Freshman of the Week on February 19 and Golfer of the Week on March 4.

In her shortened rookie season, Lindblad finished No. 2 in Golfweek and No. 9 in the NCAA Golfstat rankings, and shot 14 of 21 rounds of par or under over seven tournaments. She recorded five Top-5 finishes with two wins at the Magnolia Invitational (October 14-16, 2019) and the Florida State Match-Up (February 29-March 1, 2020).

Lindblad shot a career single-round low of 6-under 66 to start the Spring season in the first round of the IJGA Collegiate Invitational on February 16, 2020. Her final stroke average of 70.33 set an LSU single season record, passing Sagstrom’s mark of 71.48 in 2014-15.

Lindblad and her teammates pushed the Tigers to a final No. 12 ranking in the nation by Golfweek and No. 13 ranking by Golfstat.

Voting on the award will be done by current NCAA Division I players, coaches and women’s golf sports information directors and will take place from April 7-21. The winner and two finalists will be announced on Golf Channel in May. The winner receives an exemption into the 2021 Evian Championship.

For more about the ANNIKA Award, go to www.annikaaward.com.