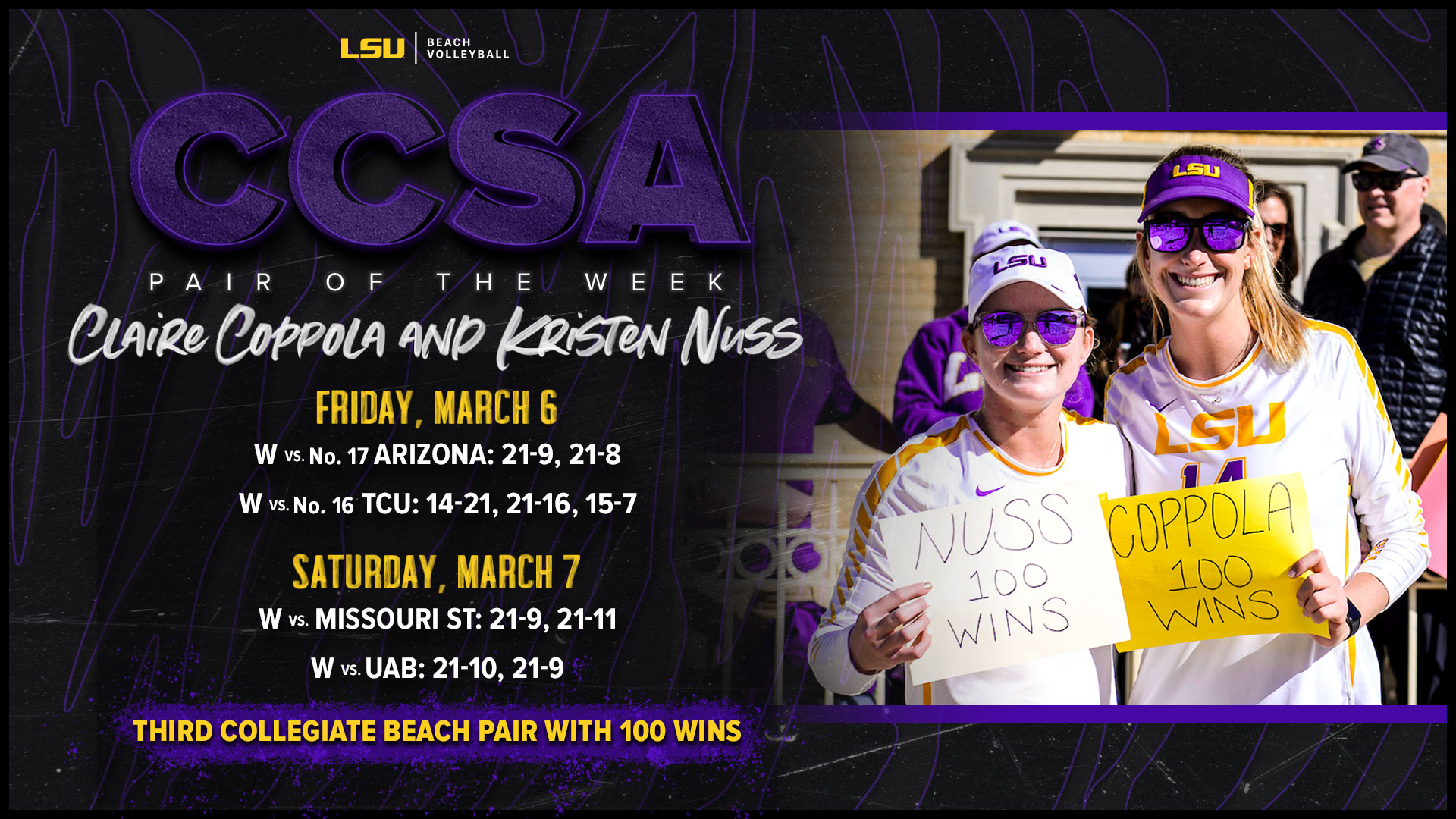 BATON ROUGE – Claire Coppola and Kristen Nuss of the No. 1 LSU Beach Volleyball team were named CCSA Pair of the Week on Wednesday following a weekend in which the Tigers’ pair on Court 1 became just the third collegiate duo to earn 100 wins together.

LSU went 4-0 over the weekend in Fort Worth and improved to 12-2 on the season. Coppola and Nuss earned the clinching court for LSU in all four matches throughout the weekend, insuring that LSU’s win streak would stay alive which is now at 11 matches. LSU hasn’t lost since the first day of the season.

Going into the weekend Coppola and Nuss sat at 99 wins together and in typical fashion, they earned their 100th win in straight-sets on Court 1 against No. 17 Arizona’s Brooke Burling and Olivia Hallaran, 21-9 and 21-8. It was Coppola and Nuss’s 86th straight-set win together after having played every match at LSU together.

Coppola and Nuss joined elite company as they earned their 100th win together as a pair. They joined USC’s Kelly Claes and Sara Hughes (147-4) and UCLA’s twin pair of Megan and Nicole McNamara (109-30) as the only collegiate beach pairs to reach that mark.

Against No. 16 TCU’s Court 1 pair of Olivia Beyer and Daniela Alverez, Coppola and Nuss rebounded to win the final two sets, 21-16 and 15-7, after dropping the first set.

Coppola and Nuss won both of their matches on Saturday in straight-sets against Missouri State’s Alaina Tinsley and Kelsey Larsen and UAB’s Kenley Adams and Mikayla Law-Heese.

With at least 19 matches remaining in their LSU careers, Coppola and Nuss sit at 103 career victories, six behind the McNamara twins of UCLA who graduated last season. Of their 103 wins, 94 have come on Court 1 where they face the toughest competition and 88 have come in straight-sets.

The Tigers are back at LSU Beach Volleyball Stadium Friday and Saturday to host the LSU Beach Invitational. LSU will have three matches – one Friday night and two Saturday – against Spring Hill College, Southern Miss and ULM. A sweep of the weekend would ensure LSU Coach Russell Brock his 100th career win since being promoted from associate head coach prior to the 2017 season.