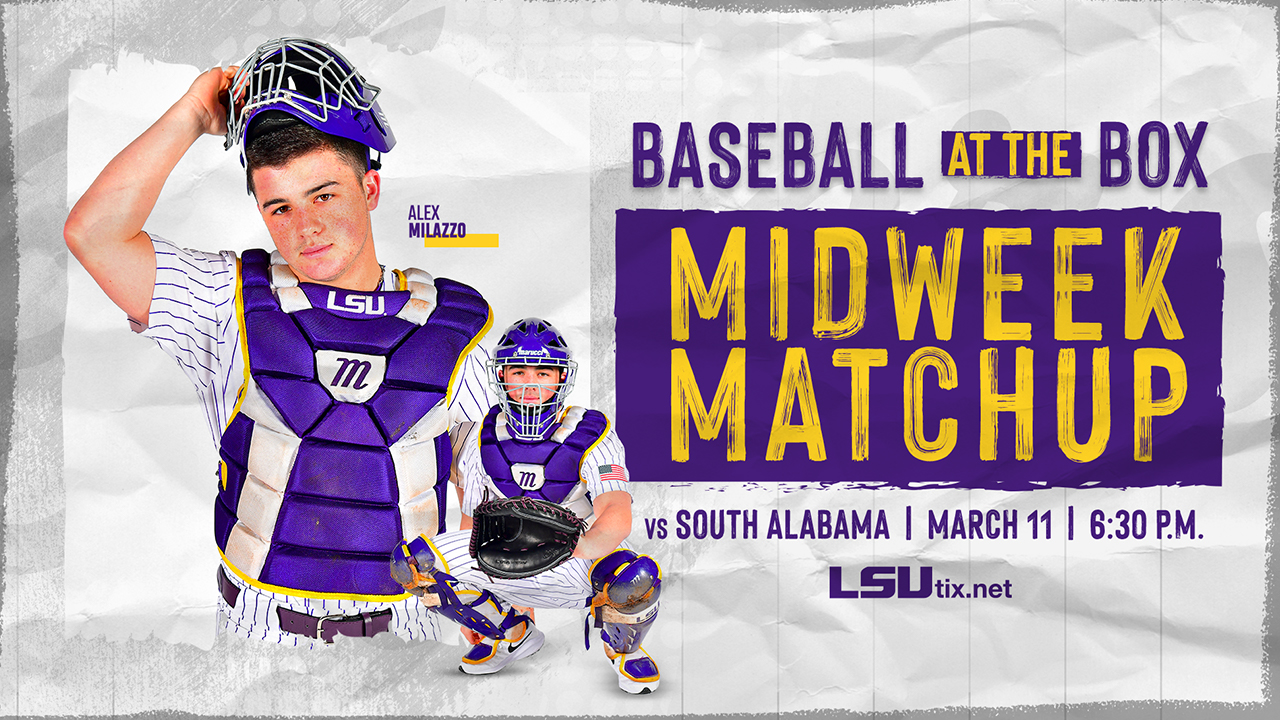 SERIES RECORD VS. SOUTH ALABAMA
Wednesday’s game marks the 43rd meeting between LSU and South Alabama in a series that began in 1971 and USA leads, 25-17. The teams have met in each of the three previous seasons in Baton Rouge – South Alabama posted a 7-6 win over the Tigers in 2017, and LSU recorded 9-4 and 2-0 wins over the Jaguars in the past two seasons. The teams also met on March 19, 2014, in Baton Rouge when LSU recorded a 9-0 win over the Jaguars. The 2014 contest was the first meeting between the schools since the 1997 NCAA South I Regional in Baton Rouge, when the Tigers defeated the Jaguars twice on the regional’s final day to advance to the College World Series. The schools met seven times in NCAA Regional games from 1989 through 1997, and LSU posted a 5-2 mark in those contests.

QUOTING PAUL MAINIERI
“South Alabama has a lot of history and tradition in their program, and (South Alabama coach) Mark Calvi has done a great job of sustaining that tradition. They’ve got a good, solid team, and they’ve played at Vanderbilt and at Arkansas this season. They played Arkansas extremely close, and you don’t go to Fayetteville and play Arkansas that tough unless you’ve got talent. I’ve watched them play, and they’ve got good athletes, so we’re going to have to really focus Wednesday in order to have a chance to win.”

ABOUT THE TIGERS
• The Tigers will wear “throwback” uniforms in Wednesday’s game versus South Alabama reminiscent of the uniforms worn by LSU in the early 20th century.
• Coach Paul Mainieri earned his 600th win at LSU when the Tigers defeated UMass Lowell on Friday night … Mainieri became just the 12th coach in SEC baseball history to win 600 games at a league school …  he has 1,466 victories in his 38-season collegiate career, and he is No. 2 on NCAA Division I Active Coaches wins list, trailing only Mike Fox of North Carolina … Mainieri now has 602 wins in his 14-season LSU tenure after the Tigers completed the sweep over the weekend of UMass Lowell
• LSU ranks No. 6 in the SEC this week in team ERA at 2.47 and No. 3 in opponent batting average at .188
• Sophomore centerfielder Giovanni DiGiacomo batted .571 (8-for-14) last week, leading LSU to four straight wins … he scored six runs while collecting two doubles, one triple and four RBI … DiGiacomo also walked twice, stole two bases in two attempts and posted a .625 on-base percentage … he raised his cumulative batting average from .261 to .382 in the four-game span … in the Tigers’ three-game series sweep of UMass Lowell last weekend, DiGiacomo was 7-for-11 with two doubles, one triple, five runs, three RBI and two steals … he tied his single-game high for hits on Friday night, going 3-for-3 at the plate with a double and an RBI
• Sophomore designated hitter Gavin Dugas launched a pair of two-run homers on Sunday to lift the Tigers to a 6-4 win over UMass Lowell … the second dinger came with two outs in the bottom of the eighth inning and broke a 4-4 tie while providing the game-winning runs … the effort marked Dugas’ first career multi-homer game, and his four RBI also marked a career best
• Freshman shortstop Collier Cranford batted .500 (5-for-10) in the Tigers’ four games last week with one double, four runs and five RBI … Cranford has also played outstanding defense this season, as he has not committed an error in 37 chances
• Freshman second baseman Cade Doughty hit .429 (6-for-14) last week with one homer, six RBI and three runs … junior rightfielder Daniel Cabrera hit .385 (5-for-13) last week with one double, five RBI and three runs
• Junior right-hander Devin Fontenot pitched four scoreless innings over two relief appearances during the week, earning a save versus Southeastern Louisiana and a win over UMass Lowell … Fontenot allowed no hits with two walks and nine strikeouts, reducing his cumulative ERA for the season to 1.00
• Sophomore right-hander Jaden Hill fired four perfect innings with three strikeouts on Saturday to earn a save versus UMass Lowell … Hill has allowed just one hit in 11.2 innings this season while recording 17 strikeouts …  opponents are batting .028 (1-for-36) against Hill this season.

ABOUT THE JAGUARS
• South Alabama is 8-9 this season, and the Jaguars dropped two of three games to Arkansas last weekend in Fayettteville … South Alabama also played at Vanderbilt (Feb. 18-19), where it was swept in a two-game series
• The Jaguars are hitting .205 as a team with seven homers and 19 steals in 23 attempts … South Alabama has a 5.57 team ERA and its pitchers have allowed a .263 opponent batting average and 17 home runs
• Junior catcher Reid Powers is hitting a team-best .346 this season with two homers and 12 RBI … sophomore outfielder Ethan Wilson is batting .303; he leads South Alabama in homers (3), and he is tied for the team lead in doubles (4) and RBI (12)