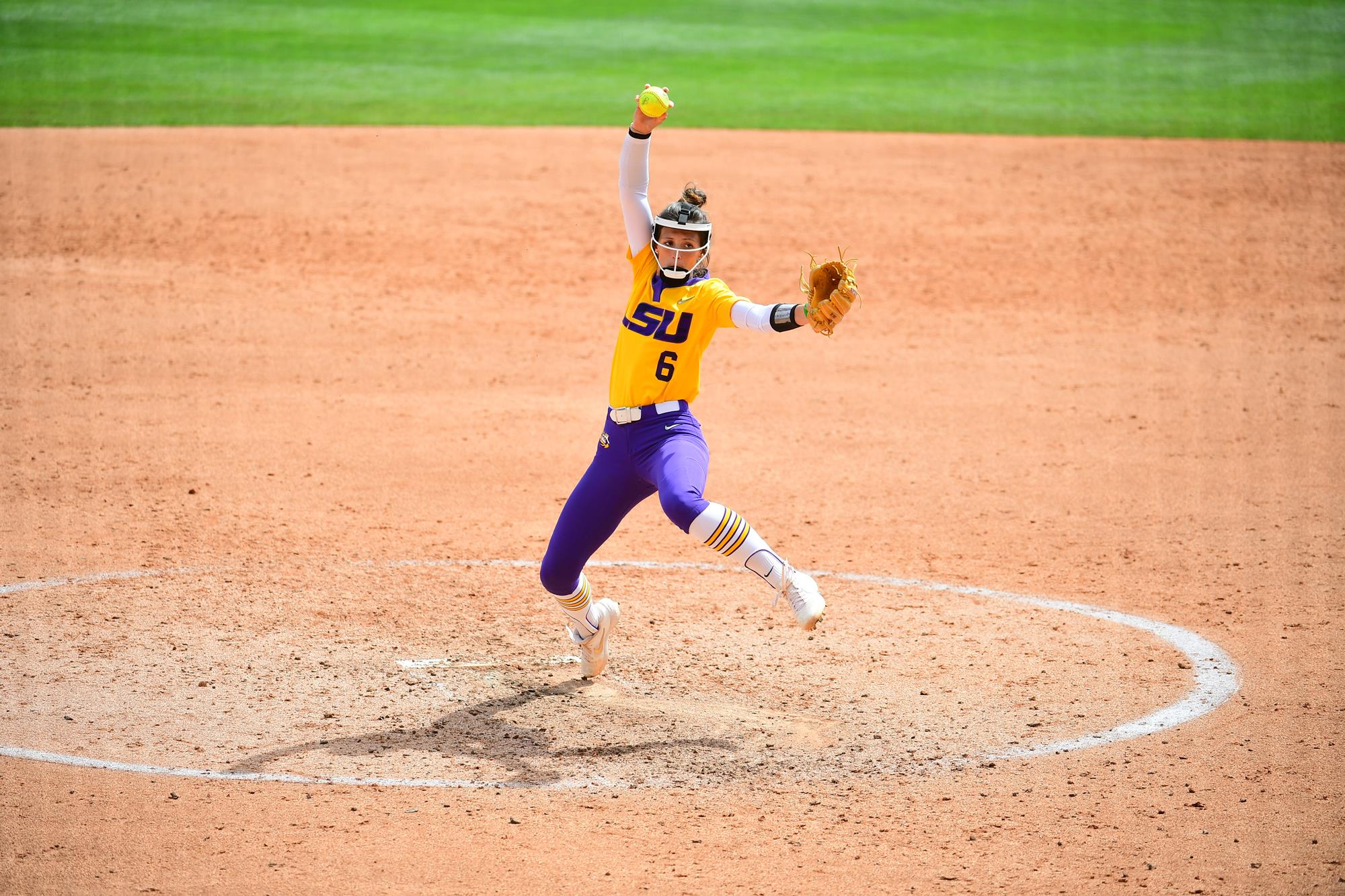 BATON ROUGE – The No. 5/4 LSU softball team defeated Illinois State 9-1 in six innings Sunday afternoon in Tiger Park. The Tigers move to 20-3 on the season while Illinois State falls to 11-11 on the year.

In the bottom of the first, Aliyah Andrews ran out a bunt to put the first base runner of the day on for the Tigers. Ciara Briggs added a single down the left field line and both advanced on stolen bases. Taylor Pleasants recorded a sacrifice fly to plate Andrews from third and Shelbi Sunseri singled to right center to score Briggs. Morgan Cummins kept the offense going with a single through, loading the bases for the Tigers. Anna Jones hit one up the middle that scored Georiga Clark.

In the bottom of the second Andrews got it started for the Tigers again with a single to left field. Pleasants added another sac fly to drive in Andrews from third. Cummins dropped a single to centerfield that plated Briggs to take a 5-0 lead.

The Redbirds put a run on the board in top of the third with a homerun, but quick defense got the Tigers out of the jam. Illinois State threatened again in the top of the fourth with a runner on third but a huge strikeout from Gorsuch ended the threat.

In the bottom of the fourth, Briggs drew a walk and Clark singled through the left side to score Briggs. The Tigers increased their lead 6-1, heading into the fifth.

In the bottom of the sixth, Clark recorded an infield single and Raeleen Gutierrez entered to pinch run. Sunseri reached on an error by the first baseman and Cummins was hit by a pitch to load the bases. Amanda Doyle singled down the left field line to push two more across the plate for the Tigers. Jordyn Perkins entered to pinch hit and singled to left center to plate the final run of the game.

Gorsuch earned the win in the circle for the Tigers. She moves to 4-1 on the year. She allowed one earned run and tallied six strikeouts. Amanda Fox took the loss for the Redbirds and moved to 1-3 on the season. She allowed seven hits and five runs were earned.

Torina’s Thoughts
On the weekend…
“It was good. I think just good continuation of some stuff we’ve been doing. Good to get back playing LSU softball. I think this is week where we could really spend some time focusing on ourselves and we were able to do that. You saw some really good swings and the offense did some really nice things.

Staying locked in during games with big lead…
“I think it’s honestly easier to stay in a game where it’s back and forth then it is in a game maybe like this. It’s easier to get distracted. I think they’ll be ready. They’ll be looking for some of those games and they’ll be excited for them. We’ll just keep swinging the bats and hope we keep playing like this against every opponent we face.”

Pitching performance of Maribeth Gorsuch…
“The one pitch, I don’t know if it got away from her or not, it looked like a pretty good pitch that (Taylor Vanderpool) hit out, honestly. Sometimes you tip your cap, and the kid hit and did a good job against us all weekend, honestly. They moved her up in the lineup today, but (Maribeth Gorsuch) was great. I thought she did a good job on the mound, exactly what we needed her to do. She’s our veteran, our senior and she just keeps leading us. It was nice to see her come out and do the same thing today.”