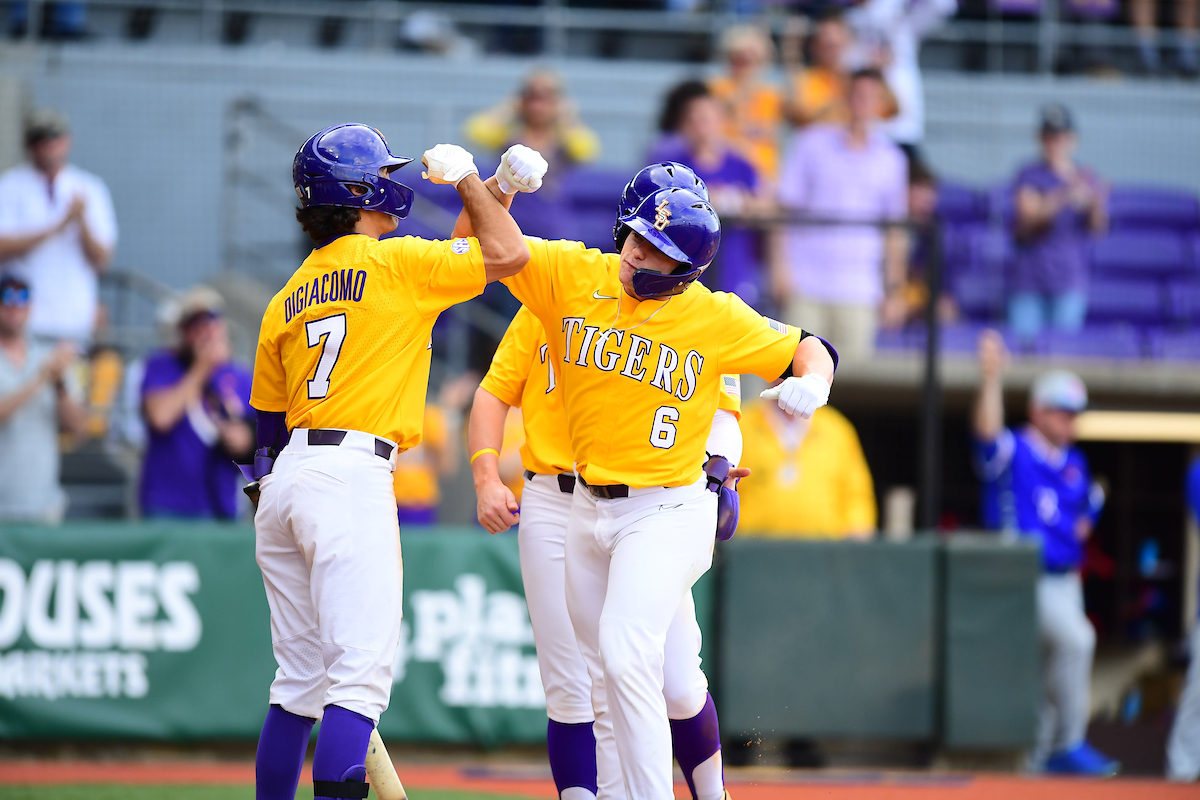 LSU improved to 11-5 on the season with the win, while UMass Lowell dropped to 4-9.

The Tigers are back at The Box for a midweek matchup with South Alabama on Wednesday night. First pitch is slated for 6:30 p.m. CT, and the game will be broadcast on SEC Network Plus. Fans can listen on 98.1 FM in Baton Rouge or online at LSUsports.net/live.

Dugas went 2-4 at the plate with two homers and four RBI to help the Tigers seal the win. Dugas’ two home runs in the game are a single-game personal best, and four RBI is also an LSU career high for him.

With the scored tied at 4-4, one runner on and two outs in the bottom of the eighth, Dugas launched a pitch from UML closer Josh Becker over the left-field wall to provide the game-winning runs.

“UMass Lowell deserves a lot of credit, they played hard all weekend and really challenged us today,” said LSU coach Paul Mainieri. “We found a way to win, and that’s what is most important.

“The story of the game, of course, is Gavin Dugas. Here’s a young man who has had a rough start to the season, but his batting practices have been good all week, and for him to step in today and hit those two big home runs, I couldn’t be happier for that young man. Gavin is such a wonderful person who works so hard and loves the game.”

Sophomore right-hander AJ Labas got the start for LSU and fired six innings, allowing four runs on eight hits with strikeouts on the day.

“Devin was phenomenal for us, and I thought AJ really battled today, especially on a hitters’ day that’s warm with the wind blowing out,” Mainieri said. “He’s not going to be afraid, and he’s going to throw the ball over the plate. He gave up two runs in the fifth which gave them the lead, but he came right back in the sixth to retire the side in order.

The loss was charged to Becker (0-2), who pitched one inning and surrendered three runs on three hits.

UMass Lowell jumped out to a 1-0 lead in the top of the second inning as first baseman Joey Castellanos launched a solo shot over the left field wall.

LSU responded in the bottom of the second inning with a three-spot to take a 3-1 lead. Left fielder Mitchell Sanford drew a walk to start the inning and Dugas followed with a two-run shot that cleared the left field wall. Centerfielder Giovanni DiGiacomo followed the home run with a triple down the first base line. Catcher Alex Milazzo then grounded out and scored DiGiacomo from third.

The River Hawks scored one run in the fourth and two runs in the fifth to reclaim a 4-3 lead. Designated hitter Ciaran Devenney hit a one-out home run to left in the fourth.

Two River Hawk runs were plated in the fifth as shortstop Keagan Calero and right fielder Vinnie Martin reached on back-to-back two-out singles. Castellanos followed with another single through the right side that scored Calero from second and moved Martin to second. Centerfielder Gerry Siracusa then singled through the left side to score Martin and give UMass Lowell a 4-3 lead.

The Tigers answered with three runs in the bottom of the eighth to take a 6-4 lead. Third baseman Zack Mathis and Cabrera drew back-to-back walks to start the eighth. Both advanced a base as first baseman Cade Beloso grounded out. Sanford then grounded out, allowing Mathis to score from third to tie the game.

With Cabrera at third, Dugas came to the plate and launched a two-run homer into the left field bleachers. Dugas’ second home run of the game put the Tigers in front for good, 6-4.