No. 1 Beach Sweeps Fight at the Fort 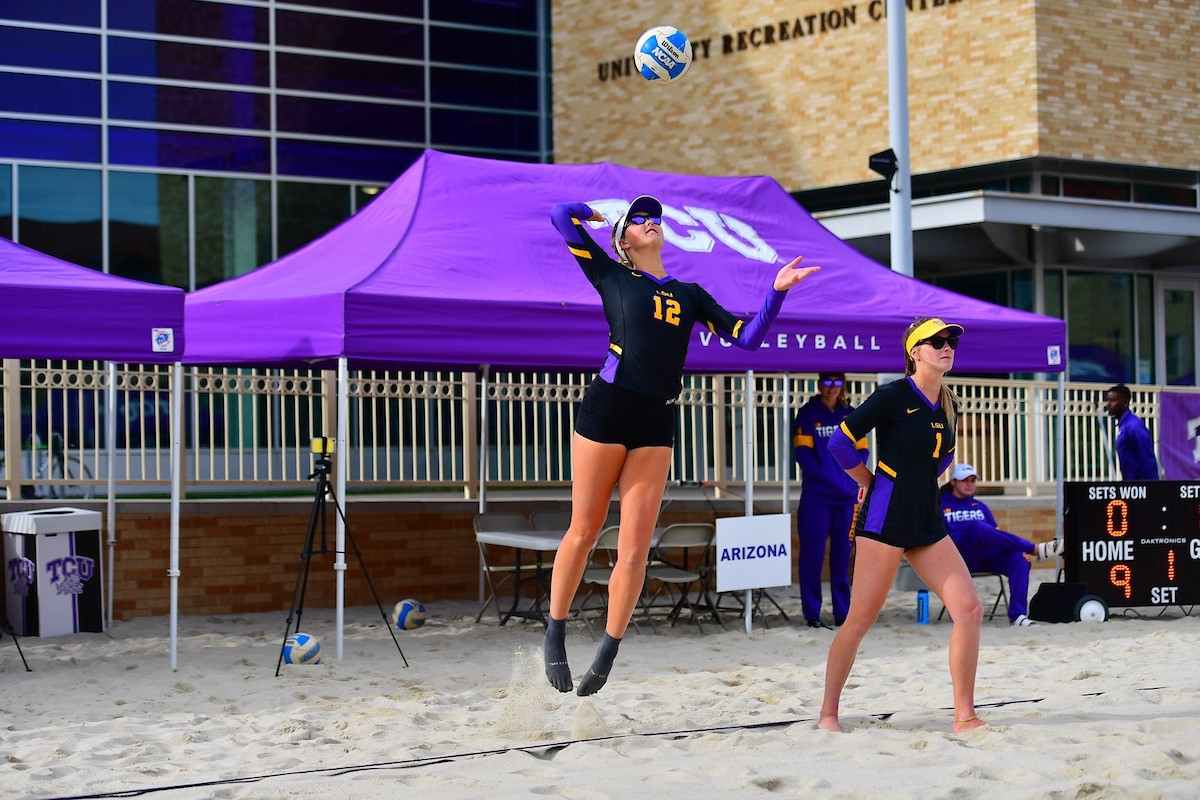 The Tigers went 4-0 this weekend at TCU’s Fight at the Fort with Friday wins against No. 17 Arizona and No. 16 TCU as well. LSU has not dropped a match since the opening day of the season.

“We did what we needed to do,” said coach Russell Brock. “As long as we are playing we’re going to have a target, we’re going to face people’s best and this weekend was no different. I’m proud of how we responded.”

Next Friday and Saturday the Tigers will be back at LSU Beach Volleyball Stadium for three more matches. LSU will face Spring Hill College on Friday and then will have matches against Southern Mississippi and Louisiana-Monroe on Saturday.

Kelli Agnew and Taryn Kloth won twice more Saturday on Court 4, improving to 13-0. They still have not dropped a single set this season.

“They did well,” said Brock. “Our threes (Toni Rodriguez and Ashlyn Rasnick-Pope) started playing on a higher level. The ones (Claire Coppola and Kristen Nuss) are obviously in a great rhythm. The fives (Dunter Domanski and Olivia Powers) proved, once again, they’re in a good spot. We know how good the twos (Jess Schaben and Sydney Moore) and they continue to get more and more consistent.”

The Court 4 pair kicked things off for the Tigers in the morning match against Missouri State, 21-12 and 21-7. Hunter Domanski and Olivia Powers followed that up with a straight-set win on Court 5, 21-9 and 21-19.

Claire Coppola and Kristen Nuss, who became just the third college beach pair to reach 100 wins as a pair on Friday, clinched the match for LSU on Court 1, 21-11 and 21-11.

Ashlyn Rasnick-Pope and Toni Rodriguez earned the Tigers’ fourth straight-set win of the match on Court 3, 21-16 and 21-10.

On Court 2, Jess Schaben and Sydney Moore battled to a 25-23 first set win, but dropped the second set, 21-18. They needed extra points in the third set, but ultimately Schaben and Moore clinched the court, 19-17, to give LSU the sweep over Missouri State.

Coppola and Nuss clinched the match for the fourth time this weekend on Court 1, 21-9 and 21-9.

Rasnick-Pope and Rodriguez again picked up the fourth straight-set win of the match on Court 3, 21-8 and 21-14.

Schaben and Moore needed three sets once again to complete the sweep for LSU. They dropped the first set on Court 2, 21-19, but came back to win the second set by the same score. In the final set of the weekend, Schaben and Moore took the court 15-11, giving LSU its eighth sweep of the season and 11th straight win.