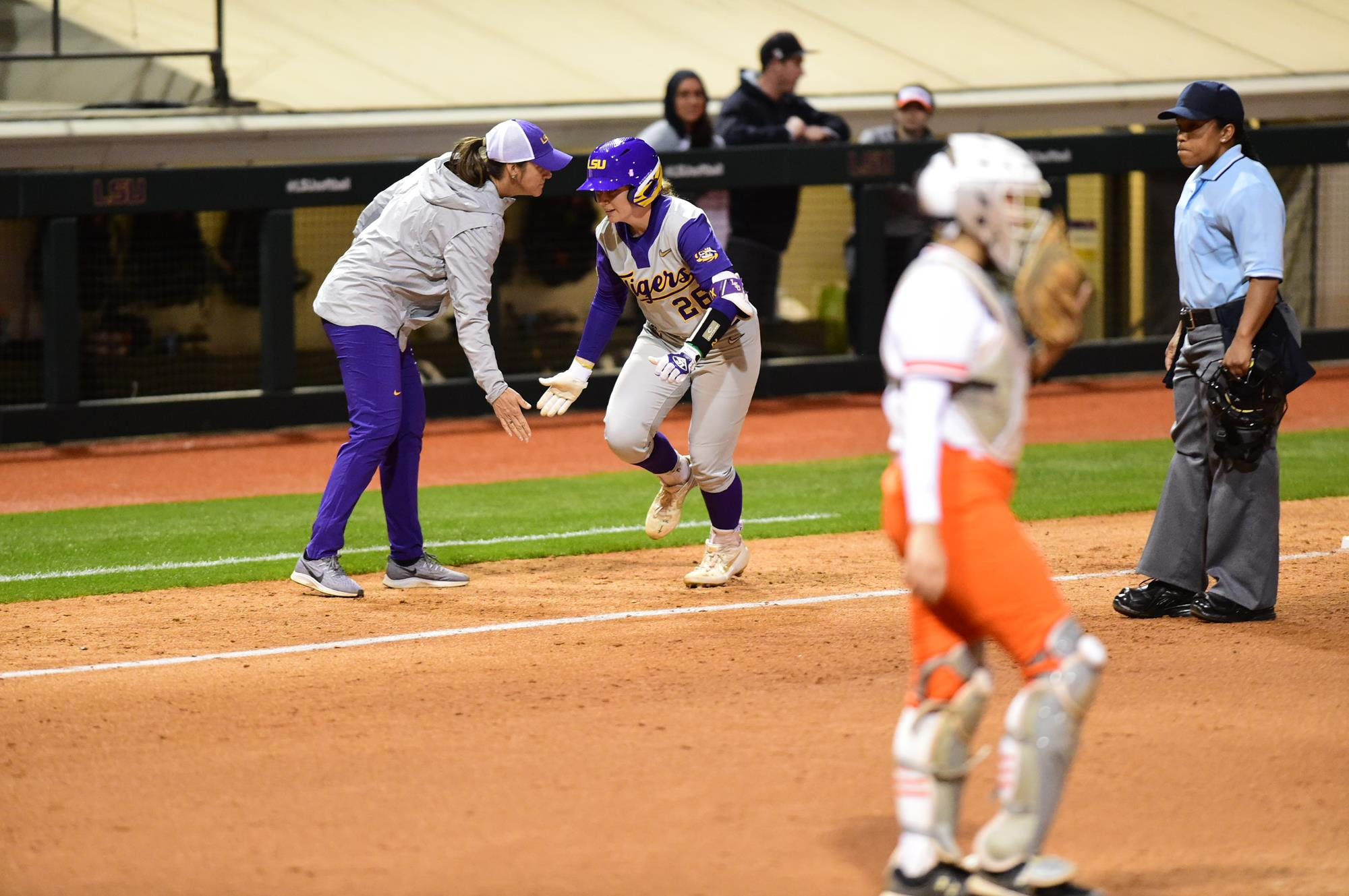 BATON ROUGE – The No. 5/4 LSU softball team downed Campbell 21-0 in five innings Friday night in Tiger Park. The Tigers move to 17-3 on the season, while Campbell falls to 10-12 on the year.

In the bottom of the first, Taylor Pleasants crushed a two-run bomb over the centerfield fence to bring in Aliyah Andrews and put the Tigers up 2-0. Shelbi Sunseri doubled to left field and was driven in by a Georgia Clark single to center. Ciara Briggs kept it going and drove a single up the middle to put runners on first and second. Amanda Doyle stroked her first homerun of the season over the centerfield fence to drive in Clark and Briggs, giving the Tigers a 6-0 lead.

Early in the bottom of the second Andrews scored on an error from the catcher followed by a Sunseri single to the left-center gap. She was driven in by a Clark dinger over the centerfield wall and Morgan Cummins got in on the action blasting a home run over the wall to add back-to-back homers for the Tigers. Andrews tallied an infield single to plate Briggs and kept the bases loaded. Pleasants drew a walk, driving in Doyle and Sunseri recorded a sacrifice fly to score Jones from third. Raeleen Gutierrez doubled to the left-center gap to drive in two more for the Tigers and Karrington Houshmandzadeh singled to plate Calland from third. LSU scored 12 runs in the inning on nine hits.

Akiya Thymes entered to pinch hit and singled through the left side followed by a Kara Goff pinch-hit single to through the left side to put two Tigers on. Pleasants walked to load the bases and Victoria Abrams added a walk for the Tigers to plate Thymes from third. Calland recorded an infield single to drive in another Tiger run. The Tigers added three runs in the inning to increase the lead to 21-0 over the Camels.

Sunseri earned the win in the circle moving to 6-0 on the year. She allowed no runs and recorded two strikeouts. Taylor Edwards came into the circle for the fifth inning and tallied one strikeout. Campbell’s Megan Richards took the loss for the Camels moving to 3-2 on the season, she allowed 11 hits, nine runs, all earned.

Torina’s Thoughts
On how team refocused after a week off…
“I think we were able to go back and do some things with our swings this week. They’re feeling good about where they’re at. A few extra days that we did some preparing but we had a few extra days without a midweek where we were able to do some fundamental stuff.”

On having most of the team getting a chance to play…
“It is nice to see the depth of your team. It’s nice to get everybody at bats. They all work hard and it’s a very long season so they’ll all be valuable for sure.”

On Shelbi Sunseri’s pitching…
“I think she did a good job. She was working on some things this week and I saw some things that happened out there. So I was proud of her effort tonight.”

The Tigers continue play in the LSU Round Robin on Saturday as they take on Campbell at 1:30 p.m. and Illinois State at 4 p.m. These games will stream on SEC Network +. They will finish the weekend on Sunday at 1 p.m. as they square up with Illinois State to round out the weekend.