No. 1 Beach Picks Up Two Top-20 Wins in Fort Worth 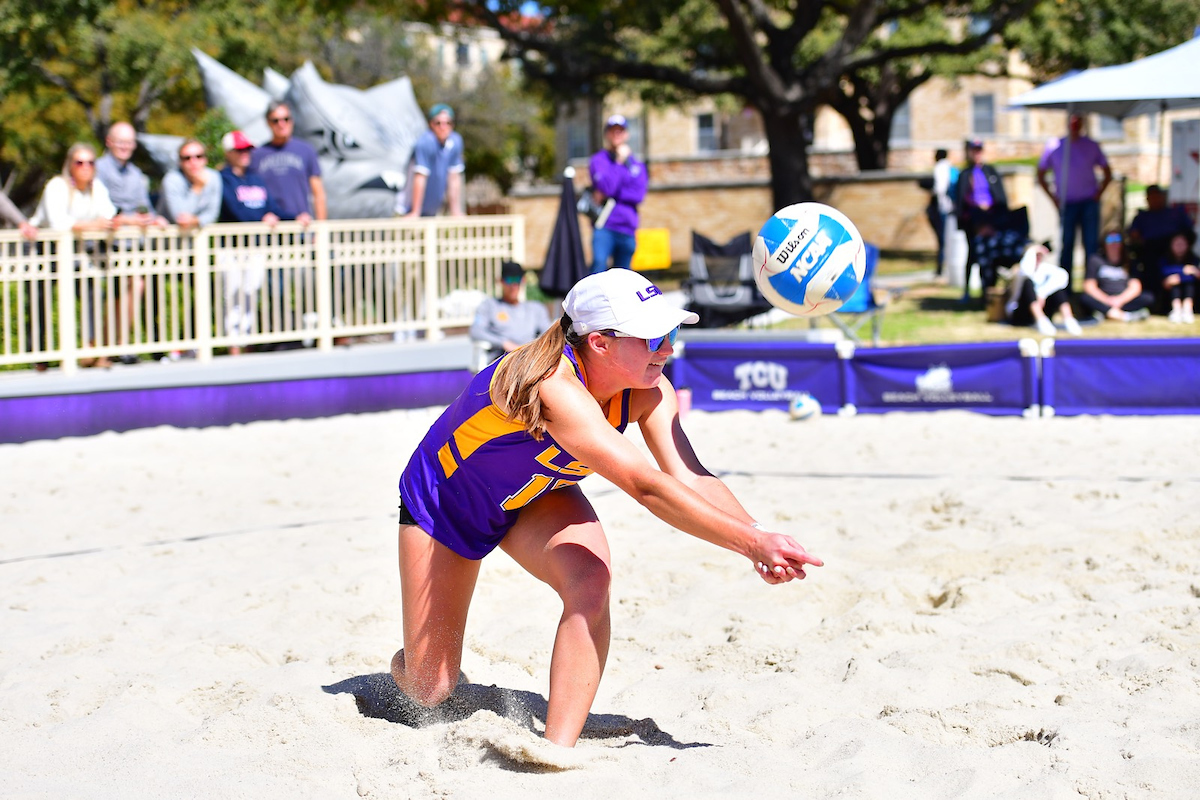 FORT WORTH, Texas – No. 1 LSU took down No. 17 Arizona and No. 16 TCU  Friday at the TCU Beach Volleyball Courts, improving its win streak to nine matches as Claire Coppola and Kristen Nuss became the third collegiate beach pair to reach 100 wins together.

“It was a great environment for our younger players to get an opportunity to play (on the road),” said coach Russell Brock.

It was a brisk, early morning first serve against the previously undefeated Arizona Wildcats. LSU started strong on Court 4 with Kelli Agnew and Taryn Kloth. The LSU duo won in straight-sets, 21-17 and 21-12, to remain undefeated together on the year.

On Court 5, Hunter Domanski and Olivia Powers also earned a straight-set victory, 21-14 and 21-10 to give LSU the early edge

Courts 1-3 began soon thereafter with the anticipation of Claire Coppola and Kristen Nuss having a chance to make college beach volleyball history. They entered the match with 99 wins.

In typical Coppola and Nuss fashion, they dominated in straight-sets, 21-9 and 21-8, picking up their 86th straight-set victory while also clinching the match for LSU over Arizona.

They join USC’s Kelly Claes and Sara Hughes (147-4) and UCLA’s twin pair of Megan and Nicole McNamara (109-30) as the only collegiate beach pairs to reach 100 wins.

“You can’t say enough great things about them,” said Brock. “It was a great match. (Scottsdale) Arizona is where Claire is from. To have the opportunity to get that 100th win against Arizona is really special. To have her parents here and Kristen’s parents here – it was a great environment for us to play well on that court and to celebrate how great they are.”

Jess Schaben and Sydney Moore won the first set on Court 2, 21-17 before dropping the second set, 21-19. In the deciding set, Schaben and Nuss won their sixth consecutive match, 15-11

Toni Rodriguez and Ashlyn Rasnick-Pope also needed three sets. They dropped the first set on Court 3, 21-18, but rebounded to even up the match with a 21-16 second set win. In the third set, Rodriguez and Rasnick-Pope clinched the sweep for LSU with a 15-11 win, handing Arizona its first loss of the year.

Later in the day in front of a rowdy home TCU crowd it was Agnew and Kloth getting it rolling for the Tigers once again, 21-11 and 21-15. The Court 4 LSU duo is yet to drop a set in 11 matches together this season.

Coppola and Nuss clinched the match for the second time of the day for the Tigers, but it was after they faced some adversity with a 21-14 first set loss. They came back strong though and won the next two sets, 21-16 and 15-7.

Court 2 was a back-and-forth battle for most of the match. Schaben and Moore pulled away late in the first set, 21-15. They dropped a close second set, 21-19 and were unable to rebound in the third set and they dropped that 15-10. LSU won the match over TCU, 4-1.

The Tigers will be back in action Saturday in Fort Worth with matches against Missouri State at 9 a.m. CT and UAB at 1 p.m. CT.

“We’ve got to have focus,” said Brock. “We know that Missouri State and UAB are both teams that are going to be really excited to step in the sand with us. We need to be efficient, effective, and play our style of ball as much as we know how.”