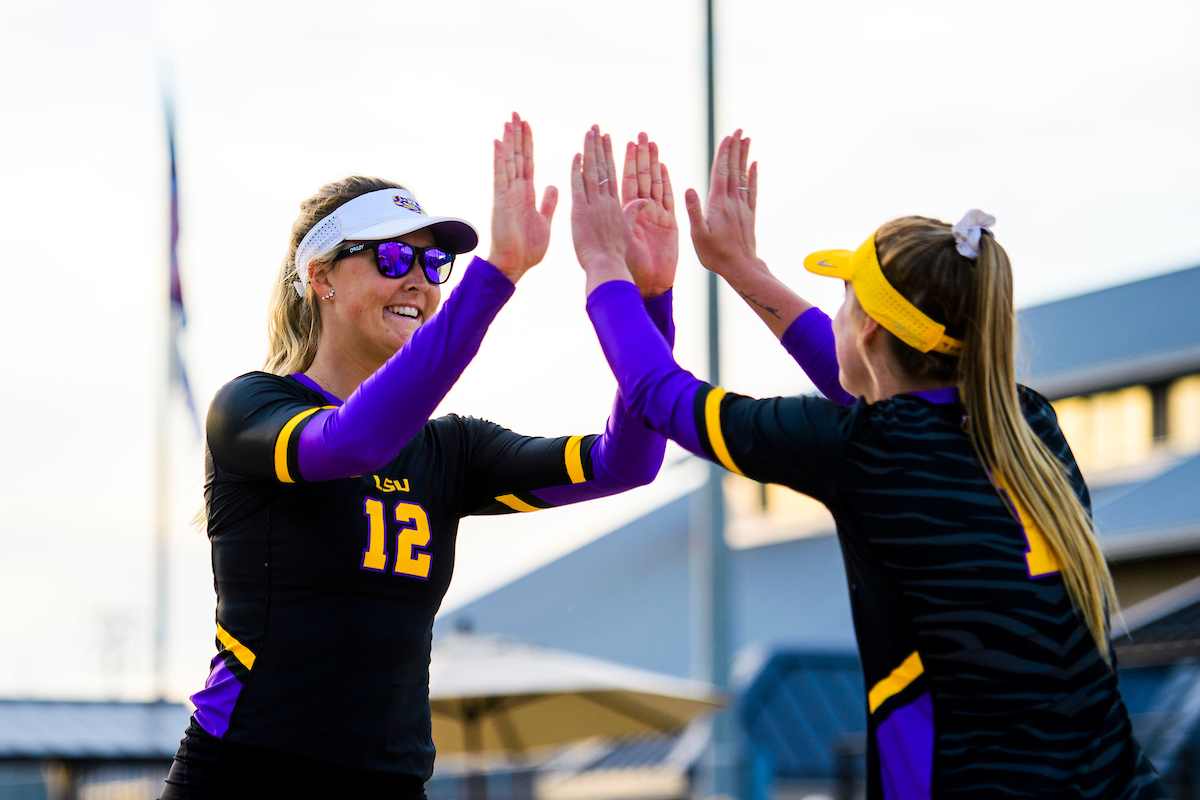 LSU beach volleyball coach Russell Brock tries to not let emotion or chemistry influence his decisions on pairing players up. But it’s hard not to see how well of a connection the court four pair of Kelli Agnew and Taryn Kloth have.

The pair is 9-0 this season and has not dropped a single set all season. They have helped LSU jump to No. 1 in the polls for the first time in school history.

Brock described Kloth and Agnew as a classic block-defender pair in beach volleyball. Kloth, at six-foot-four, is adept at protecting the net while Agnew is quick enough to return anything on the back half of the sand.

Brock paired them together in four matches last year, with all four resulting in a win, but for a variety of reasons they weren’t able to stick together like they have in 2020. Now with added trust and an extra year of experience, Agnew and Kloth have blossomed into one of the best pairs in the entire country.

“I look up to Taryn, literally, but our relationship, I can tell her anything,” Agnew said. “I think we’re very close, and it helps on the court too because I almost know what she’s going to do and when she’s going to do it. I think it’s just that click that happened this year and that we were missing last year.”

Kloth points to a video from one of their matches that has made the difference for the two. Agnew kept turning around before the serve saying, “I want this one. I want this one, Tarryn. Get this one point.” The focus on the small picture and the moment at hand is more important than being 9-0 for the two of them.

For Brock, the pairing made the most sense because of what he saw on paper. He looks predominately at how a pair can cover up each other’s weaknesses while exacerbating their strengths. But he is conscious of how the interaction and personalities of a pairing can impact how they play.

“On paper it is a nightmare to play against,” Brock said. “It’s just if that paper, once again, hit reality –  and we expected it to – and when it did it wasn’t a surprise. It was more like a relief that all right, nothing got in the way, they’re not allowing anything to get in the way of reaching their potential that clearly is there.”

The most important part for Agnew and Kloth going forward, Brock says, is to block out records or streaks and just focus on playing. He believes they’re good enough to just focus on playing their game and instead of adjusting to their opponent, make the opponent adjust to you.

Although LSU is No. 1 on paper, and Agnew and Kloth are one of the best pairings in the country through 10 matches, it’s just the start of what they want to accomplish.