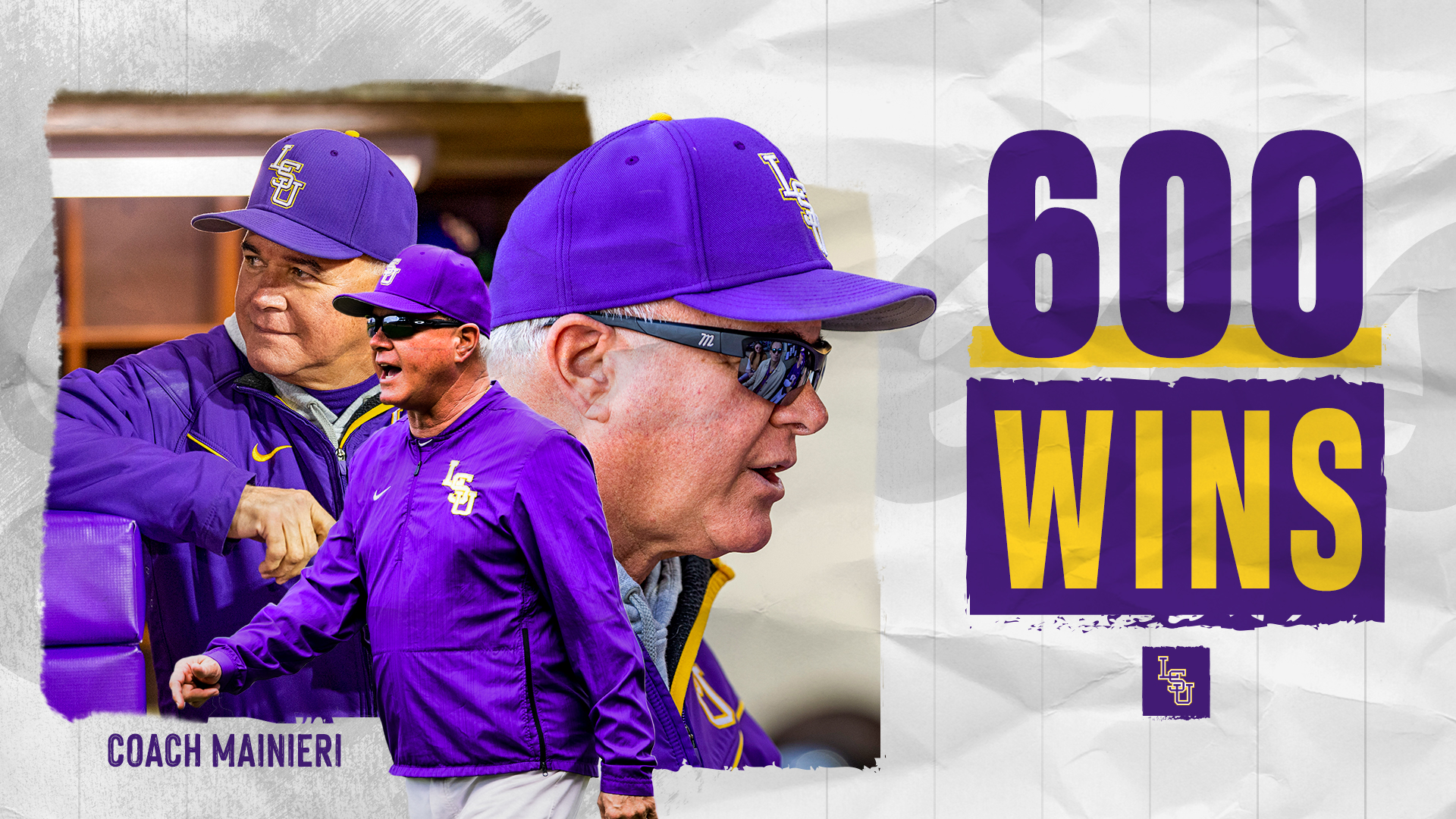 BATON ROUGE, La. – No. 20 LSU erupted for 11 runs from the third through the sixth inning Friday night at Alex Box Stadium, Skip Bertman field to take an 11-2 win over UMass Lowell in the first game of the weekend series.

LSU improved to 9-5 on the season with the win over the River Hawks. UMass Lowell dropped to 4-7 overall.

The win was the 600th at LSU for coach Paul Mainieri, who became just the 12th baseball coach in SEC history to win 600 games at a league school. Mainieri, who is in his 14th season at LSU, has 1,464 wins in 38 seasons as a collegiate head coach and ranks No. 2 among active NCAA Division I coaches in career victories.

The Tigers return for the second game of the weekend series Saturday at 4 p.m. CT. Saturday’s game will be broadcast on SEC Network Plus, and fans can also listen on 100.7 FM in Baton Rouge or online at LSUsports.net/live.

Freshman second baseman Cade Doughty went 3-3 at the plate with a run and three RBI in the game to help lead the LSU offense. Sophomore centerfielder Giovanni DiGiacomo also was 3-3 on the night with three runs and an RBI.

“Winning 600 games is just a number to me,” Mainieri said. “A milestone like that is mostly about the kids; this is why I went into the profession 38 years ago to try to touch the lives of young men, and that’s what is most important to me. I’m glad to have coached this long to have as much interaction with these young men as I’ve had.

UMass Lowell got on the board first in the top of the third inning as shortstop Keagan Calero smacked a two-out double down the third base line. First baseman Kyle Maurice scored from second to give the River Hawks the 1-0 lead.

The Tigers responded with a run in the bottom of the third to tie the game, 1-1. With the bases loaded, third baseman Zack Mathis was hit by a pitch that brought DiGiacomo home from third.

Shortstop Collier Cranford hit a two-RBI single through the right side that scored DiGiacomo and catcher Alex Milazzo in the bottom of the fourth. DiGiacomo and Milazzo both drew walks to get on base.

With Cranford at first and left fielder Drew Bianco at third, Doughty hit a single to right that allowed Bianco to score, and Cranford moved to third on the play. Third baseman Zack Mathis then hit a sac fly to left that allowed Cranford to score.

Doughty stole second and then scored on a single to right center by right fielder Daniel Cabrera, giving the Tigers a 6-1 lead.

LSU added four more runs in the fifth to extend the advantage to 10-1. Designated hitter Saul Garza hit a leadoff double to right and Milazzo followed with a walk. DiGiacomo then dropped an RBI single to center that scored Garza and moved Milazzo to second.

Bianco drew a walk before Doughty came to the plate and singled up the middle to bring two runs home. DiGiacomo and Milazzo scored on the play and Bianco moved to third. Mathis hit a ground out that allowed Bianco to score from third.

The Tigers added one run in the home side of the sixth inning as first baseman Cade Beloso scored from third on a wild pitch. Beloso reached on a leadoff single and moved to third on a Milazzo walk and a DiGiacomo single. The run gave LSU an 11-2 lead.

Senior right-hander Matthew Beck (1-0) earned the win for the Tigers as he fired three relief innings, allowing one unearned run on two hits. Beck struck out four and walked two.

Reliever Henry Funaro (0-2) was charged with the loss for UMass Lowell. He pitched 0.1 inning and allowed five earned runs on two hits with three walks.