Tigers Take Bite Out Of Gators At SEC Tournament 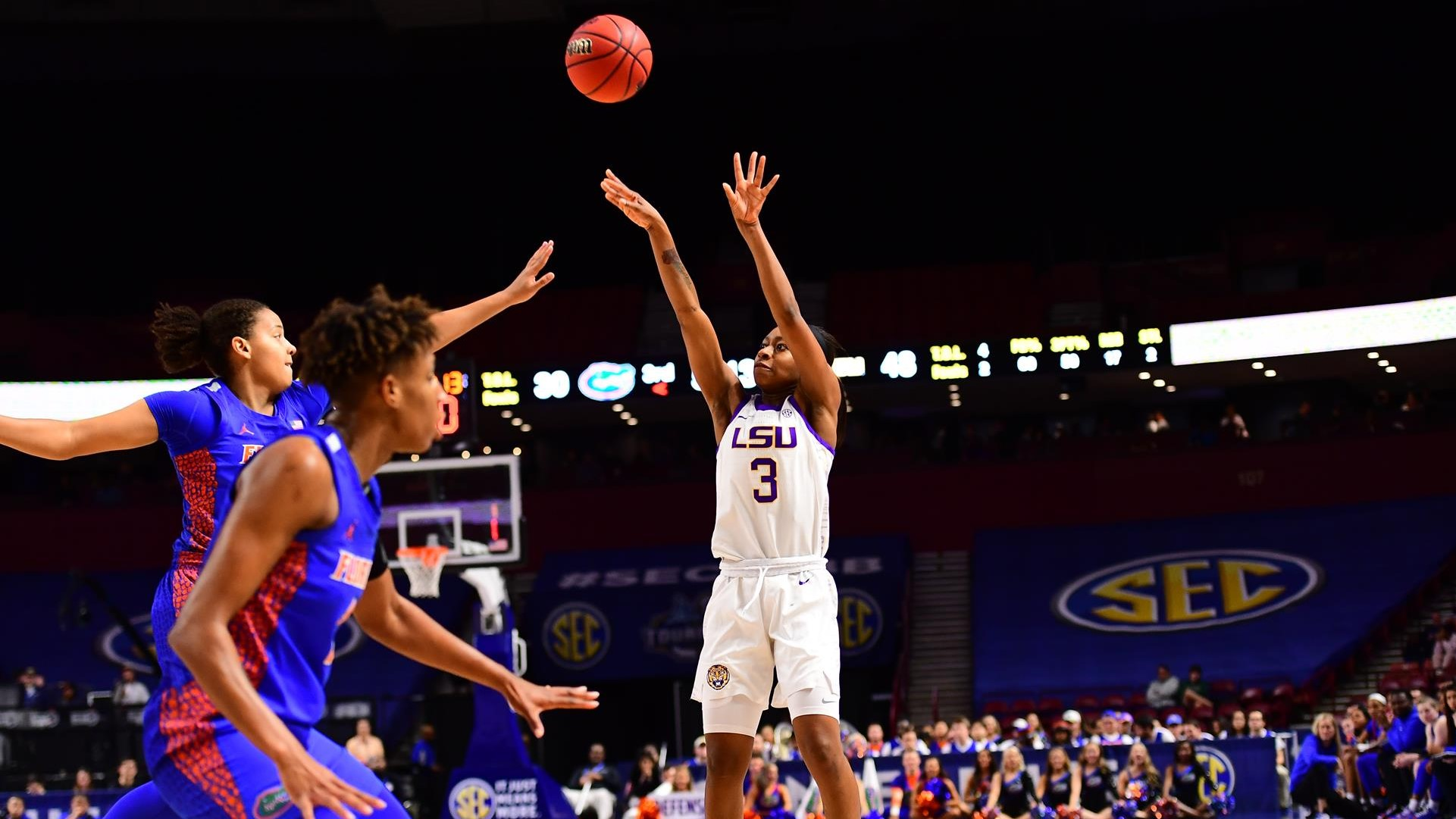 GREENVILLE, S.C. – The No. 7 seed LSU women’s basketball team defeated the No. 10 seed Florida Gators in the second round of the 2020 SEC Tournament by a final score of 73-59. With the win, the Tigers improve to 20-9 on the season and 31-14 all-time versus the Gators. LSU advances to the quarterfinals against No. 2 seed Mississippi State on Friday, March 6 at 5 p.m. CT.

It was offense by committee for the Tigers throughout the entire game. Khayla Pointer led the way with 19 points, 11 in the second half, four assists and two rebounds. Faustine Aifuwa finished with 16 points, grabbed four rebounds, and blocked three shots. Mercedes Brooks was a huge spark off the bench for head coach Nikki Fargas and the Tigers as she finished with 13 points and went 6-6 from the free throw line. Jailin Cherry led the Tigers in rebounds with five while also adding six points.

For the season, LSU improves to 5-1 when leading by 20 or more points. The largest Tiger lead was 24, 63-39 at the 9:04 mark in the fourth quarter. The Tigers also shot an outstanding 50 percent from the field for the fifth time this season, improving their record to 15-5 this season when shooting higher than 40 percent. Another key to the game was free throw shooting as the Tigers shot 90 percent (18-20) from the charity stripe, the highest percentage the Tigers have shot from the line this season.

With the win, the Tigers reach the 20-win mark for the fourth time under Coach Nikki Fargas. This is the sixth time LSU has reached the third round of the SEC Tournament since the bracket expanded to 14 teams in 2013.

LSU will face the No. 2 seed Mississippi State Bulldogs in the quarterfinals of the SEC Tournament on Friday at 5:00 p.m. CT from inside the Bon Secours Wellness Arena in Greenville South Carolina. The game will air on the SEC Network. Fans can also watch the game on the ESPN app. Patrick Wright will call the game on the LSU Sports Radio Network. Wright is in his 30th season as the “Voice of the Lady Tigers”. Fans can listen on 107.3 FM and audio broadcasts are available online at LSUSports.net/live. Live stats will be available at LSUsports.net.

The key to dominating the game from start to finish…

“It all starts with Khayla Pointer. We go as she goes. Her ability to get other players involved before she gets herself involved makes us a better offensive team. I really kept telling them that we need to get deflections because they lead to steals which leads to transition baskets. We also wanted to establish Faustine (Aifuwa) inside. I thought she did a nice job of being that power player we needed on the block and then let the others find their shots.”

We just have to take care of the basketball. Mississippi State will press you and pick you up full court. You have to give yourself a chance to get down the floor. After in-bounding the basketball, you have to be ready for that hard denial give yourself a chance to score. Defensively we are a team that has to play like a family. We have to move lie a unit. When we play a team like State who likes to dribble-drive, you have to be in the gaps and not get sucked down too far. So defensively, we have to be ready to play a very good offensive team.”