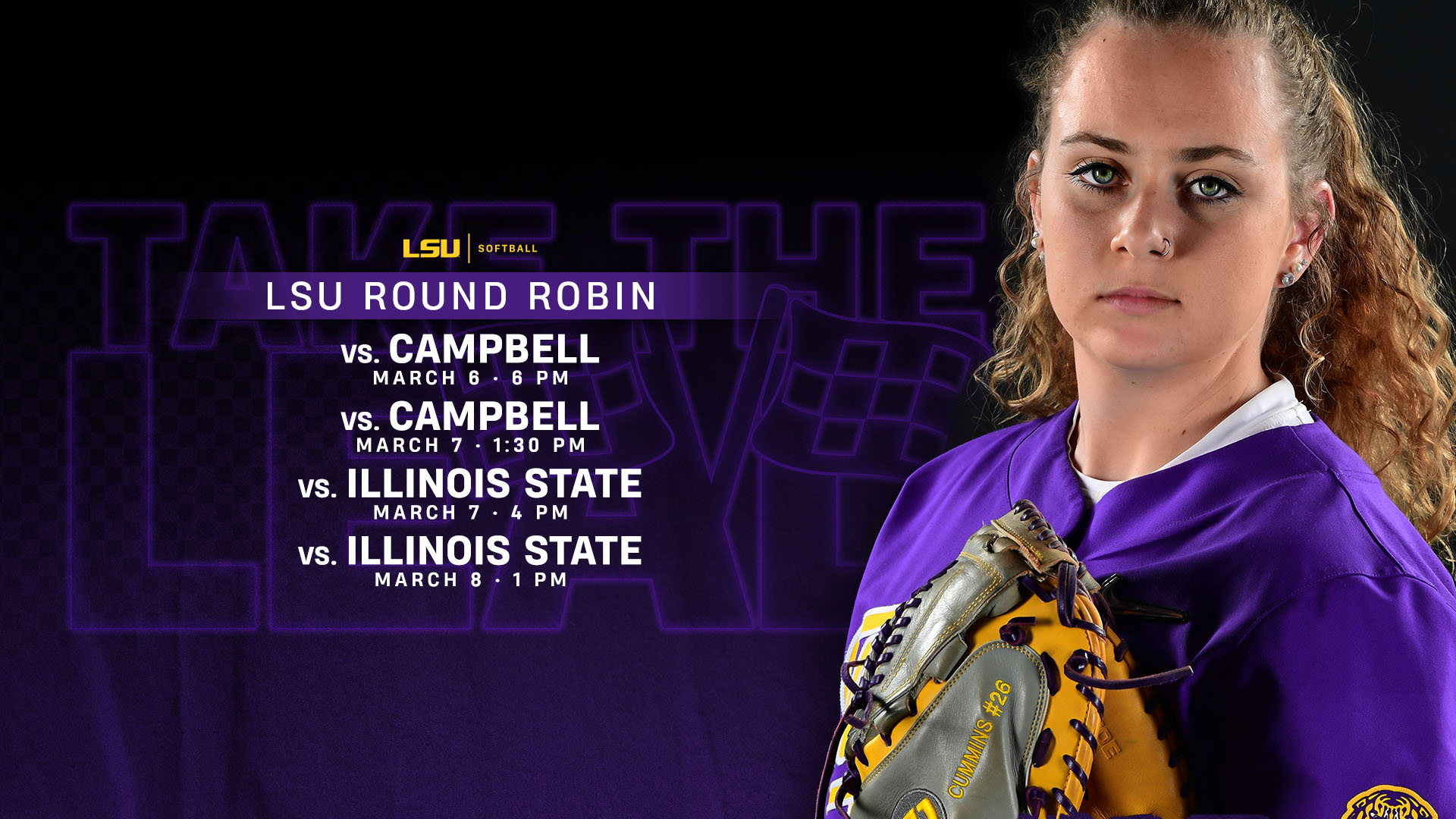 BATON ROUGE – The No. 5/4 LSU Softball team will host the LSU Round Robin this weekend, welcoming in Campbell and Illinois State Friday through Sunday. For a full tournament schedule, click here.

All four of LSU’s games this weekend will stream online through SEC Network+ with Hall of Famers Lyn Rollins and Yvette Girouard on the call. All four games will also be available via live stats at LSUStats.com.

About the Tigers
LSU goes into the weekend with a 16-3 overall record. The Tigers are coming off a 3-2 weekend after beating No. 25 Texas Tech, Cal and Colorado State. The Tigers fell to No. 2 Washington and LMU.

Against the Field
– Campbell – The Tigers lead the all-time series 2-0, facing the Camels in a doubleheader on March 6, 2010. The Tigers took game one 8-0 in five innings and claimed game two 2-1 in eight innings. This will be the first time Beth Torina will face the Camels.

– Illinois State – The Tigers lead the all-time series 5-0 against the Red Birds, all games coming under Torina. The Tigers faced them last season, coming out on top 6-2.

Scouting the Opposition
Campbell
The Camels go into the weekend with a 10-10 record. They are coming off a loss to College of Charleston last Sunday. They were supposed to face ULL on Wednesday but due to weather, the game was cancelled. Destini England leads the team with a .392 average at the plate. She owns 29 hits in 20 games with 17 runs scored, a double, two triples and four RBI. In the circle, the Camels are led by Georgeanna Barefoot. She owns a 1.97 earned run average and is 5-4 with four shutouts. She has struck out 74 batters in 64 innings of work.

Illinois State
The Red Birds are 9-9 on the year and are coming off a 12-1 five-inning loss to Western Kentucky last Sunday. Mack Leonard is leading the team at the plate with a .415 average. She has 27 hits, 18 runs scored, eight doubles, two triples and six home runs. She has tallied 17 RBI. In the circle, Morgan Day leads the team with a 2.86 ERA. She is 5-4 with a total of 94 strikeouts in 58.2 innings of work.

What’s On Deck
The Tigers will face off against South Alabama next Tuesday, March 10 in Tiger Park at 6 p.m. before hitting the road for their first SEC weekend at South Carolina March 13-15.

– Due to the chance of high temperatures throughout the season, we will allow one factory sealed bottle of water per person to enter Tiger Park.  There are also water fountains on the concourse if you would like to refill your bottle during the game.

Ticket Info
Tickets for the 2020 LSU Softball season are now on sale through the LSU Ticket Office and online at LSUtix.net. For more information on the 2020 softball schedule, click here.

For more information about Dinner on the Deck, the Mobile Grass Pass and Monthly Subscriptions, click here.