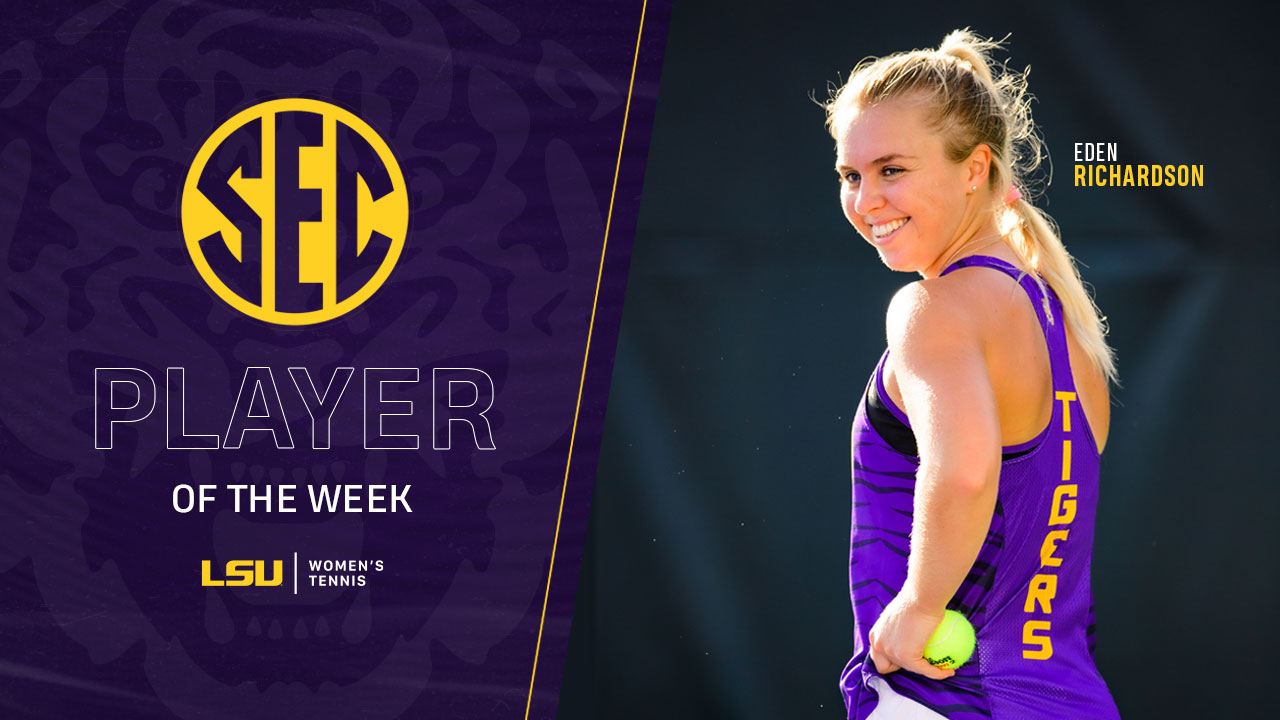 BATON ROUGE –  LSU women’s tennis junior Eden Richardson was recognized as the SEC Player of the Week, the league office announced on Wednesday.

“Eden thrives in the team atmosphere as she has played confident tennis this past month,” co-head coach Michael Sell said. “We are thrilled for her for this tremendous recognition, and of her performances this past weekend. She is a true Tiger, and we are excited to watch her continue to grow as the season progresses.”

On Friday, Richardson and partner freshman Nina Geissler earned their second ranked win of the overall season after defeating No. 18 Georgia Drummy and Christina Rosca at the No. 1 doubles in dominant style, 6-1. Richardson’s doubles win contributed to the doubles point, followed by defeating Emma Kurtz at the No. 3 singles in straight sets, 6-3, 6-3, to help the visiting LSU Tigers defeat No. 20 Vanderbilt by a score of 4-3 at the Currey Tennis Center. The win was LSU’s first Top 25 win of the season, and first win over Vanderbilt since 1997.

Richardson finished the weekend on Sunday at the LSU Tennis Complex with another 6-1 doubles win, this time over Missouri’s Gabrielle Goldin and Serena Nash. Richardson then grabbed the first singles point of the afternoon with a 6-2, 6-1, straight set win over Vivien Abraham in a 4-0 match victory for LSU. Richardson’s two wins on the weekend took her to 9-1 in the dual season, and is currently on a team-high six match winning streak. In doubles, Richardson and Geissler’s 7-2 record in the spring as a duo is the highest on the team, and warranted a ranking at No. 26 in this week’s Oracle/ITA Doubles Rankings.

“It was a great start to SEC play and I think it shows how hard we’ve all been working,” Richardson said. “We’re excited to continue and can hopefully get some more wins against top players.”

The No. 25-ranked Tigers are back on the road for two matches on the upcoming weekend. First, LSU travels to Gainesville, Florida to take on the Florida Gators on Friday, March 6 at 5 p.m. CT before ending the weekend in Columbia, South Carolina with a match against South Carolina at 10 a.m. CT on Sunday, March 8.