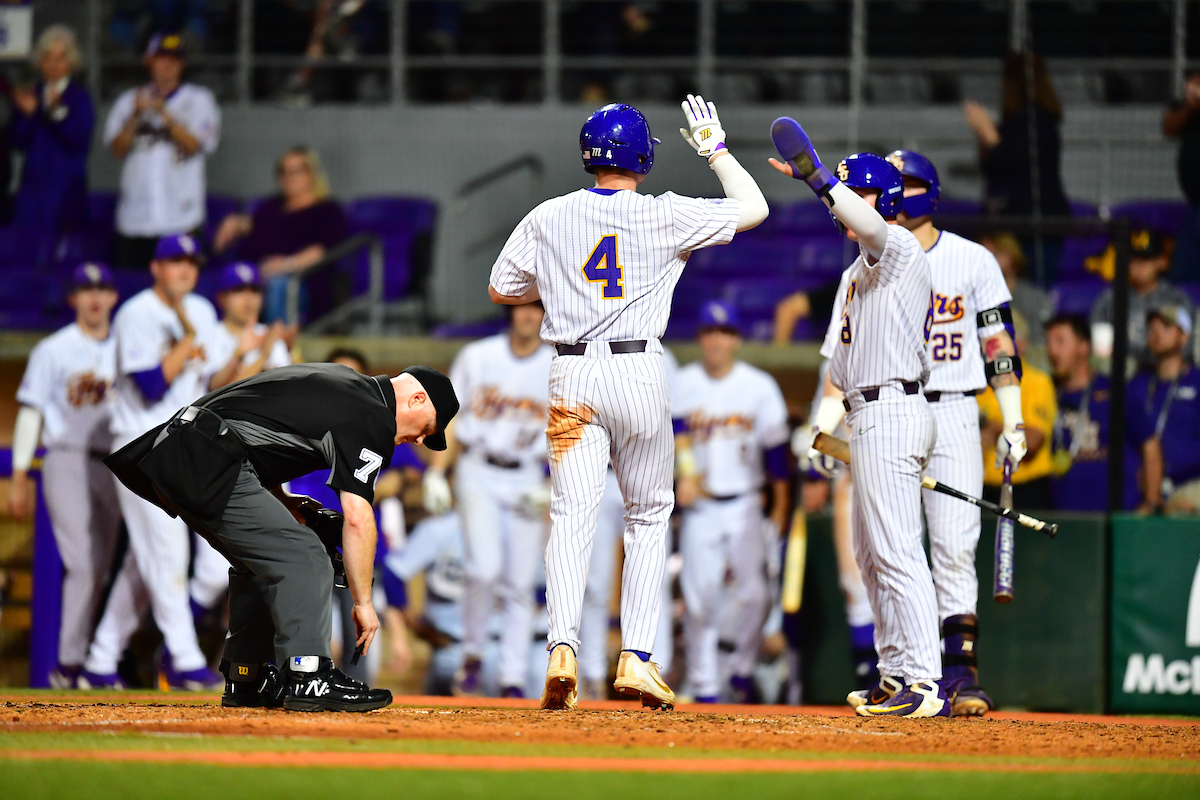 With the win, the Tigers improve to 8-5 on the season. Southeastern drops to 5-7.

Due to the weather forecast, Wednesday night’s game against Grambling has been postponed until Monday, April 13, at 6:30 p.m.

“Southeastern is always a very difficult team for us to play, and they threw some good arms against us tonight,” said LSU coach Paul Mainieri. “We had some good at-bats early in the game; yesterday at practice we worked hard on avoiding strikeouts by hitting the ball to the opposite field, and we did a pretty good job of that tonight.

“We’ve just got to keep working on our hitting and try to keep getting better. It’s not pretty right now, we’re not tearing the cover off the ball. But, I know our kids can hit better than they’ve shown, and hopefully things will start to click a little more offensively for us.”

LSU junior left-hander Brandon Kaminer (2-1) started the game and earned the win with three innings of work. He allowed one earned run on three hits with two strikeouts.

Nick Storz, Trent Vietmeier, Chase Costello, Jacob Hasty and Devin Fontenot all pitched out of the bullpen for the Tigers. Fontenot worked two hitless innings and picked up five strikeouts to earn his third save of the season.

Southeastern starter Daniel Dugas (0-3) suffered the loss as he allowed three runs, two earned, on four hits in two innings on the mound.

The Tigers jumped out to a 1-0 lead in the bottom of the first as leftfielder Drew Bianco doubled and later scored from third on a groundout by right fielder Daniel Cabrera.

LSU added two more runs in the second inning. Catcher Saul Garza scored on an RBI single through the right side by centerfielder Giovanni DiGiacomo. Shortstop Collier Cranford then hit a double to right-center that scored DiGiacomo to give LSU a 3-0 lead.

Southeastern plated one run in the top of the third on an RBI single up the middle by right fielder Christian Garcia.

Cabrera led off the bottom of the third with a double to left. Second baseman Cade Doughty then launched a two-run dinger that cleared the left field bleachers to give the Tigers a 5-1 advantage. The homer was Doughty’s second of the year and first since LSU’s season opener versus Indiana.

The Tigers added another run in the fifth as Bianco scored from second on an RBI single off the bat of first baseman Cade Beloso. Bianco drew a walk to start the inning and moved to second on a single by Cabrera.

SLU designated hitter Jacob Burke hit a one-out solo shot to left in the sixth to trim LSU’s lead to 6-2. The Lions added another run in the seventh as first baseman Preston Faulkner scored from third on a sac fly to center by Garcia, narrowing the gap to 6-3.