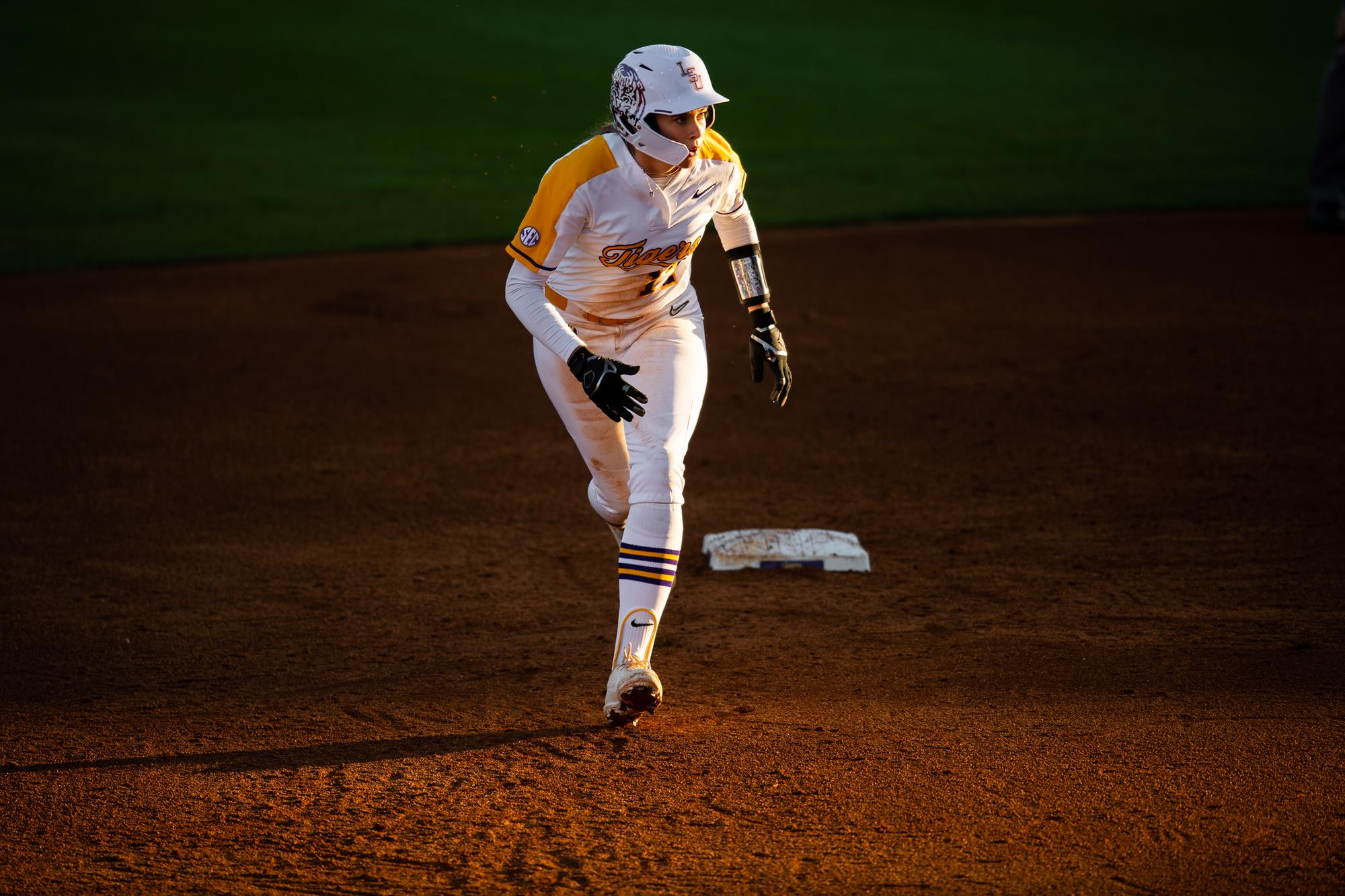 Taylor Pleasants thought she had her nerves under control when the first pitch of her first collegiate at-bat was delivered on opening night.

Then she stepped out, took the second pitch, and her heart started pounding.

Entering with lofty expectations as a freshman, Pleasants needed little time to make some noise in her first collegiate game, doubling into the right-center field gap in the bottom of the fourth for her first career hit. From that point on, the nerves subsided, and it was business as usual.

With LSU sitting at 16-3 overall heading into March, Pleasants currently leads the team in runs (19) and hits (18), while hitting .375 and slugging .604. With each game, she seems to be getting more comfortable at the plate.

“It was rough at first, getting the hang of the speed of the game,” Pleasants said. “Everything is a little bit faster than what I’m used to, but it’s been a smooth transition.”

Signing with the Tigers as a four-time First Team All-District infielder from J. Frank Dobie High School in Houston, Texas, Pleasants was a highly-touted prospect generating lots of excitement. At LSU softball media day on Jan. 22, coach Beth Torina couldn’t help but single her out from the rest.

“She’s truly living up to everything that you would expect from a player on the Junior National team,” Torina said. “She’s really talented, special, and I think our team knew it when they saw her right away.”

Pleasants spent the summer of 2019 representing the United States on the Junior National team, where she was a WBSC U-19 Women’s Softball World Cup gold medalist, recording a .268 batting average, with three RBI and three runs scored.

“It was a step up from what I was used to, a little like [being at LSU],” Pleasants said about her experience with the Junior National team. “Putting on the [USA colors] was awesome. I didn’t expect for that to ever happen. It has always been a dream of mine.”

Given her success on some of softball’s highest stages, the expectations for Pleasants heading into the season were palpable, but in her first month in Baton Rouge, she’s knocked it out of the park.

“It was a little bit of pressure, not wanting to let people down,” she said. “For the most part, there’s been a lot of help around me, so that’s been able to get me through everything.”

Just three weeks into her collegiate career, Pleasants leads the team in multiple categories, is a proven everyday shortstop, and has become a key piece in LSU’s star-studded lineup.

On Feb. 8 against Oklahoma State, Pleasants rifled a walk-off homer into the center field bleachers in the bottom of the seventh. Coach Torina jumped with two fists in the air, as Pleasants rounded third and hit the Heisman pose with her teammates as she crossed the plate.

BOMB DOT COM! @Tpleasants17 with a 2-run dinger to start this offense off!

It’s only a month into her first season, but it gets you thinking: how special can Pleasants be in her time at LSU?

“I think the sky’s the limit for her,” Torina said. “If she continues on this path, she’s going to accomplish a lot of her goals, and she has some very lofty ones.”

All the great ones separate themselves with their mentality. For Pleasants, it’s a methodical, thorough approach that’s rare from a 19-year-old freshman.

“She’s very business-like in everything she does,” Torina noted. “She’s fun, too, of course, but she is very focused. She dots all the i’s and crosses all the t’s, whether it be in the classroom, or getting in extra work on offense and defense. She’s very detailed, very put-together, and business-like.”

Pleasants says she hasn’t become a vocal leader yet, but she’s trying to work on that. The good news? She’s got three more years to turn into one. Through the first month, though, she feels becoming a leader-by-example has come into play with the extra work she puts in after practice.

High school prospects of Pleasants’ caliber usually have their minds made up early in the recruiting process, but for the Houston native, her decision to put on the purple and gold wasn’t exactly the marriage she grew up envisioning in the backyard.

In her first official visit to LSU, Pleasants wasn’t sure what to expect. In fact, she came to Baton Rouge to “rule it out,” but ended up falling in love with a place she knew felt like home.

Everywhere Pleasants has gone, she’s been a winner. The commitment to winning here at LSU is no different. The program is one widely recognized for its consistent success, appearing in six Women’s College World Series Championships, and Pleasants feels this team has all the makings to get back to Oklahoma City for the first time since 2017.

“From the looks of it, very good,” she said on how good the team can be. “I’m expecting to go to the World Series this year, and, hopefully, win it.”