Game is First of Six Straight Home Contests for Tigers 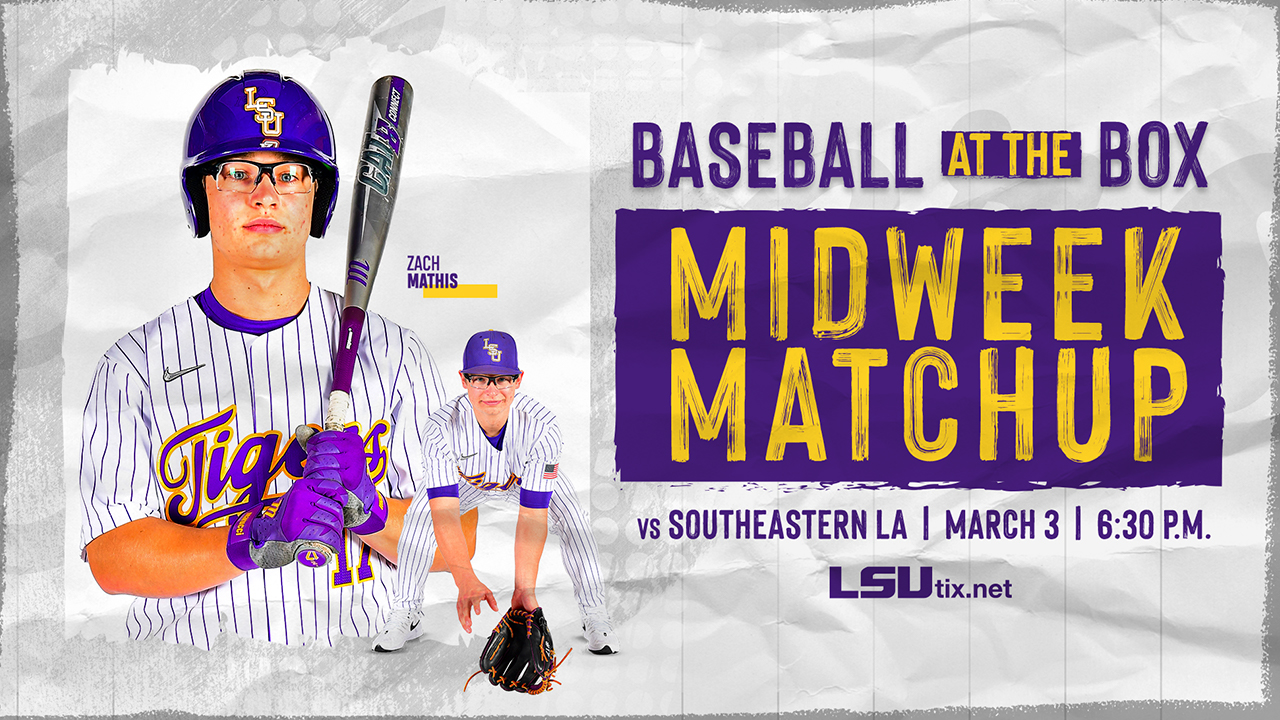 SERIES RECORD VS. SOUTHEASTERN LOUISIANA
LSU leads Southeastern Louisiana, 71-18, in a series that began in 1937, and the Tigers have won 25 of the last 27 meetings between the schools. The Tigers posted a 6-5 win over the Lions last season (Feb. 19) in Baton Rouge. LSU has a 44-4 mark against Southeastern Louisiana since 1990.

QUOTING PAUL MAINIERI
“Southeastern starts a big five-game week for us; it’s the final full week of games before we begin SEC play next weekend at Ole Miss. Southeastern has an excellent program that competes at a high level, and we’ve played some very tough games against them, including last year when we beat them by one run, and in the NCAA Regional back in 2017. It’s up to us to continue to work hard and keep getting better as we turn the page into the month of March.”

ABOUT THE TIGERS
• LSU split four games last week with wins over Louisiana Tech and Texas, and losses to Baylor and No. 11 Oklahoma … the Tigers faced Texas, Baylor and Oklahoma in Houston at Minute Maid Park in the annual Shriners Hospitals for Children Collegiate Classic; the weekend marked LSU’s third appearance in the event since 2015
•  LSU coach Paul Mainieri has 1,462 victories in his 38-season collegiate career, and he is No. 2 on NCAA Division I Active Coaches wins list, trailing only Mike Fox of North Carolina … Mainieri has 598 wins in his 14-season LSU tenure and is looking to become just the 12th coach in SEC history to reach the 600-win mark at a league school
• LSU ranks No. 3 in the SEC this week in team ERA at 2.46 and No. 3 in opponent batting average at .182
• Sophomore right-hander AJ Labas suffered a hard-luck loss to Oklahoma after turning in a brilliant effort … Labas worked eight innings and had a no-hitter through the first seven innings, but he gave up a lead-off home run to catcher Justin Mitchell in the eighth that proved to be the difference in the 1-0 OU win … Labas retired the next three batters in the eighth after the homer and completed the eight-inning outing with no walks and seven strikeouts on 90 pitches … Labas became the first LSU pitcher to fire seven straight hitless innings since 2017, when Jared Poche’ threw a complete-game seven-inning no-hitter against Army
• Sophomore right-hander Cole Henry posted a 2-1 record in his three February starts, recording a 1.80 ERA with 21 strikeouts in 15 innings … he limited opponents to a .200 batting average and gave up just one extra-base hit … Henry defeated Texas at Minute Maid Park in Houston on Friday, allowing only two earned runs on four hits in six innings with two walks and 10 strikeouts … Henry also earned a win in LSU’s season opener over Indiana, firing four scoreless innings while recording no walks and eight strikeouts
• Sophomore right-hander Jaden Hill earned his first LSU career save in Friday’s win over Texas with a dominating three-inning performance … Hill fired three scoreless frames, allowing no hits with one walk and six strikeouts, preserving the Tigers’ 4-3 victory … in three relief appearances this season, Hill has allowed no runs on one hit in 7.2 innings with five walks and 14 strikeouts
• Junior rightfielder Daniel Cabrera batted .500 (5-for-10) in LSU’s three games in Houston last weekend with one homer, two RBI and four runs scored … his two-run homer on Friday night versus Texas was the game-winning hit, as it erased a 3-2 Texas lead in the sixth inning and the Tigers went on to secure a 4-3 victory … for the entire four-game week, Cabrera hit .467 (7-for-15) with a .500 on-base percentage.

ABOUT THE LIONS
• SLU is 5-6 this season, and the Lions are batting .233 as a team with two home runs and 24 steals in 32 attempts … the SLU pitching staff has a 4.31 cumulative ERA … the Lions won two of three games over Stony Brook last weekend in Hammond.
• The Lions are led at the plate by freshman infielder Jacob Burke, who is batting .333 with two doubles, one triple, one homer, five RBI and five stolen bases … Burke is a product of University High School in Baton Rouge.
• Redshirt freshman infielder Champ Artigues is hitting .270 and has driven in a team-best 11 runs … Artigues is the son of former SLU head coach and current athletic director Jay Artigues.