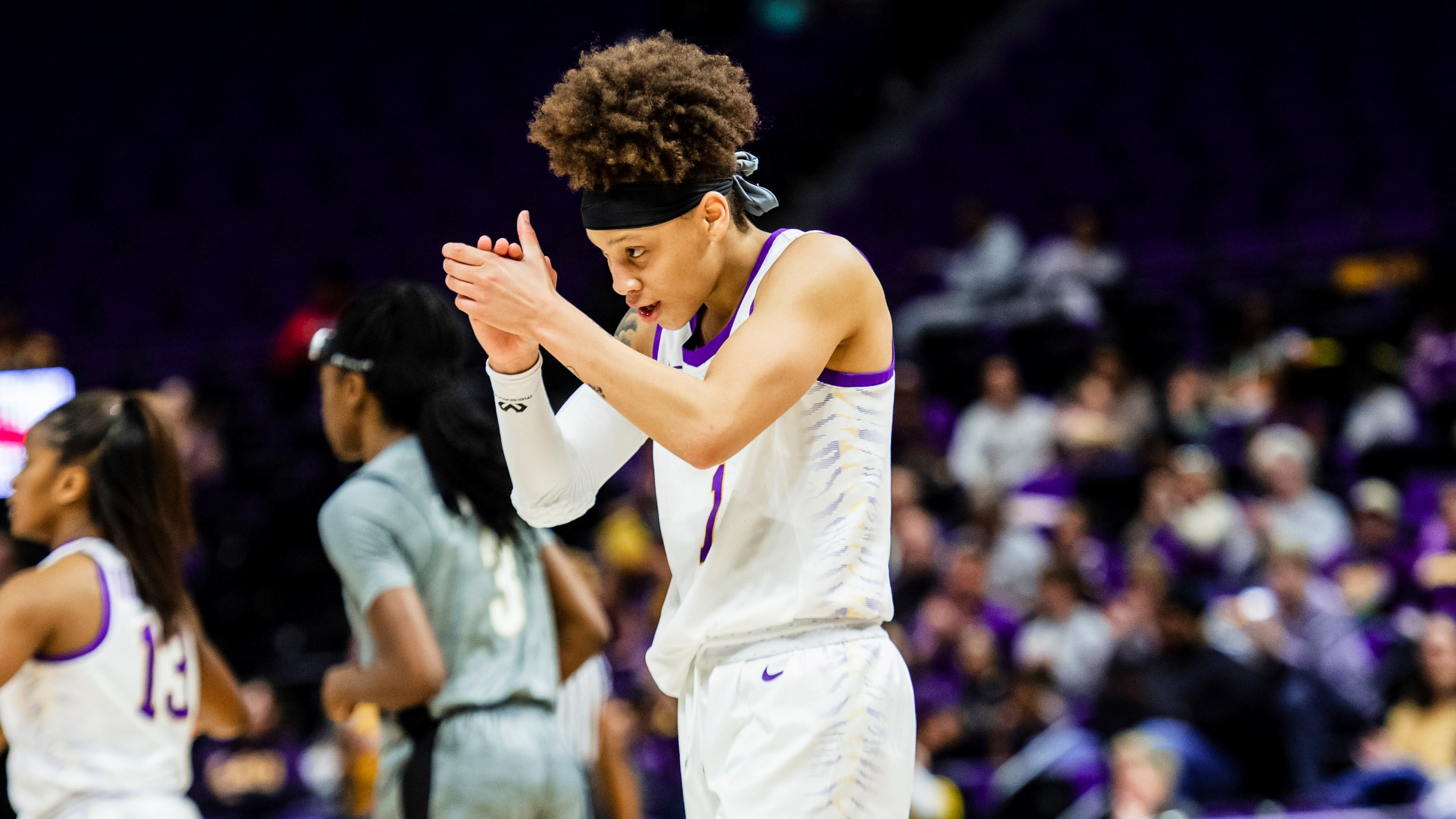 BATON ROUGE – The LSU women’s basketball team wraps up the regular season on Sunday, March 1 at Arkansas. Game time is set for 1:10 p.m. CT as part of the SEC Network’s whip-around coverage of the last seven games of conference play. The Tigers are 19-8 and 9-6 in SEC play, tied with Arkansas for fifth place in the standings. The Razorbacks are 21-7 overall.

LSU is battling for a shot at a double-bye into next week’s SEC Tournament in Greenville, S.C. Only three seeds have been determined heading into the final day of regular season action – No. 1 South Carolina, No. 2 Mississippi State and No. 14 Ole Miss. With a win on Sunday, LSU could end up tied with Kentucky, Texas A&M or Tennessee or in a three- or four-way tie with any of or all three. The Tigers hold tiebreaks over Kentucky (1-0) and A&M (2-0), but split with Tennessee. With a loss on Sunday, LSU could end up tied with Tennessee for 6th place. With the split, the tie would be broken by the team sitting in the No. 3 seed position.

Paul Sunderland and Christy Thomaskutty will call the game on Sunday for the SEC Network Plus.  Fans can also watch the game on the ESPN app. Patrick Wright will call the game on the LSU Sports Radio Network. Wright is in his 30th season as the “Voice of the Lady Tigers” and is joined on home broadcasts by Jeff Palermo. Fans can listen on 107.3 FM and audio broadcasts are available online at LSUSports.net/live. Live stats will be available at LSUsports.net.

LSU closed out the 2019-20 home season at 12-2 with a 61-55 win over Vanderbilt to end a three-game losing streak and keep the Tigers in contention for a double-bye to next week’s SEC Tournament. Redshirt junior Faustine Aifuwa earned the 700th point of her career with her first basket of the game and went on to lead the team with 18 points in the victory. She also had a team-leading eight rebounds and six blocked shots. Junior Khayla Pointer contributed in a big way with 12 points and led the team with 7 assists. Senior Jaelyn Richard-Harris hit a momentum-changing three-point basket late in the fourth quarter and finished with nine points, while junior Awa Trasi added 10 points and five rebounds to the cause. Junior Jailin Cherry also had a strong overall performance with career highs of five assists and six steals to go along with eight points and five rebounds.

Aifuwa is having a solid season in the paint for LSU. Aifuwa is second on the team among active players with 10.9 points per game. She is sporting a 47.8 field goal percentage to go along with 8.0 rebounds per game and 51 blocked shots.

Pointer leads the squad from the point with 14.7 points and 4.8 assists per game. She has one of the best free throw shooting percentages on the squad at 70.7 and the most steals with 60. She is 12 points away from scoring her 900th career point.

With the loss of Mitchell, LSU head coach Nikki Fargas counts on her bench to step up and fill the void with several players taking on different roles. Trasi moved into the starting slot and stretches LSU’s offense with her long-range shooting. Trasi, Richard-Harris and Cherry make up the starting lineup, averaging a combined 16.4 points 7.9 rebounds and 3.6 assists per game. Several players, including junior Rakell Spencer and freshman Tiara Young, come off the bench to provide a defensive spark against opponents’ top player.

Head coach Mike Neighbors is in his third season as the head coach at his alma mater. LSU leads the series 33-16.

The Tigers will head to Greenville, South Carolina for the 2020 SEC Women’s Basketball Tournament. All games will be broadcast on the ESPN family of networks, including the SEC Network.

Geaux Clear at the SEC Tournament

Fans are reminded that a policy similar to the Geaux Clear Policy at LSU will be in effect for the SEC Tournament. Diaper bags must be clear and no larger than 12″ x 6″ x 12″. Backpacks, including drawstring/synch bags are strictly prohibited. Fans with medically-necessary items will be allowed to enter the arena following a more thorough search at the designated inspection points.