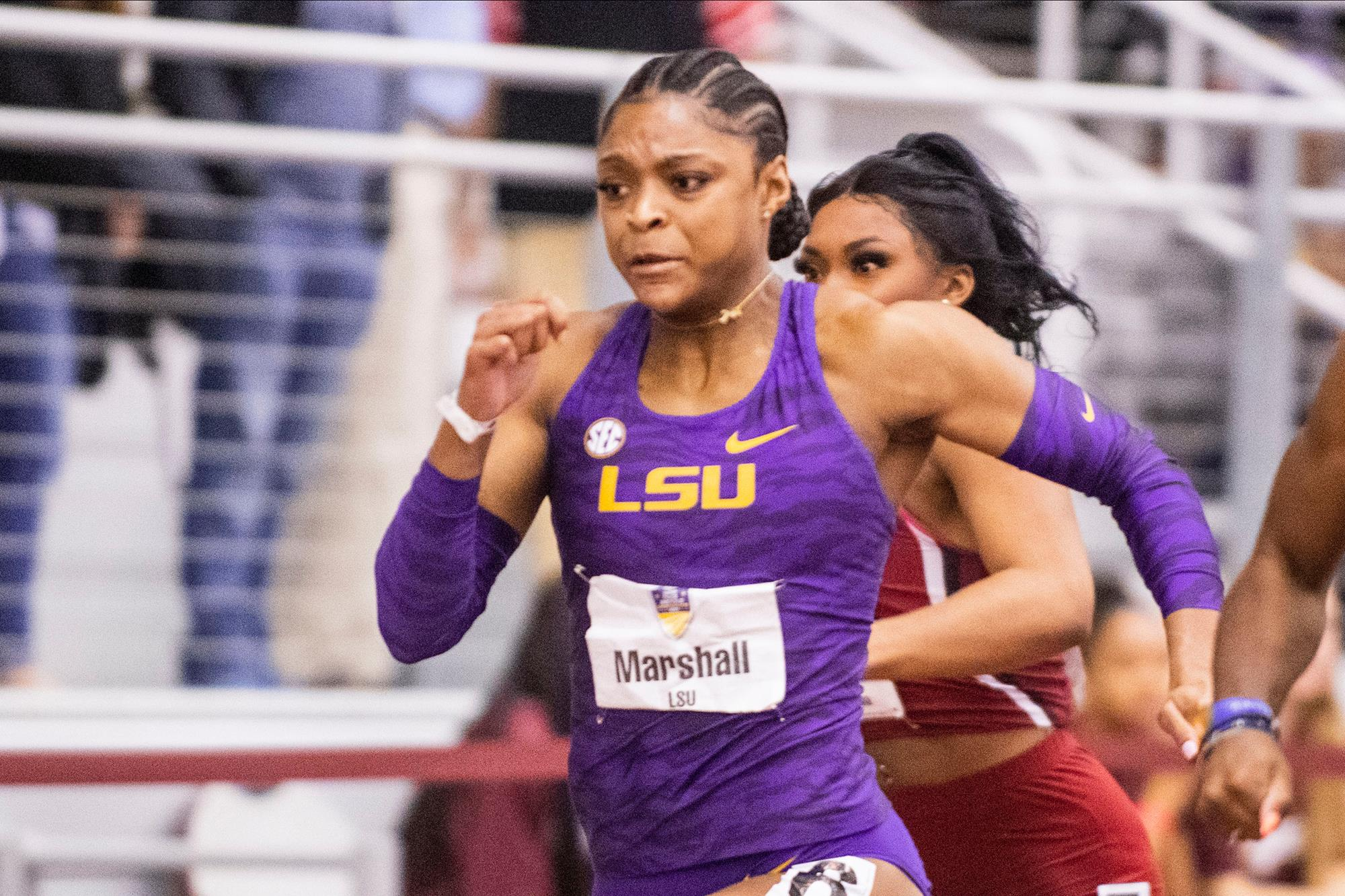 Baton Rouge, La. –  The LSU Tigers won four individual titles at the 2020 SEC Indoor Championships, finishing second in both the men’s and women’s team competition.  LSU placed second behind the Arkansas Razorbacks at this year’s SEC Championships which were held at the Gilliam Indoor Track Stadium in College Station, Texas.

The Arkansas Razorbacks won both the men’s and women’s team titles with scores of 106 and 102, respectively.  The LSU women’s team scored 87.5 points and the men’s squad scored 88 points as each team placed second.

Four LSU track and field athletes won titles in their respective events on Saturday.  One of the winners was the reigning champ in the men’s high jump competition, JuVaughn Harrison.  Harrison won the 2020 SEC Championship in the high jump competition with a third attempt clearance of 7′ 5″ (2.26 meters).  He became the first male athlete to win consecutive SEC titles in the event since 2013.  Another title winner for the Tigers was Terrance Laird who represented the Tigers in the men’s 200 meter dash.  Laird, who ranks second in LSU history with a PR of 20.43, ran a time of 20.52 on Saturday to claim the gold medal and is the first LSU champion in this event since 2016.  One of the more impressive times of the weekend came from Tonea Marshall who won the women’s 60 meter hurdles with a record breaking time.  Marshall ran a time of 7.89 to break the SEC Championship record time that has been held by Kentucky’s Kendra Harrison since 2015.  The standout junior became the second female athlete to ever record a sub 7.90 time three times in a season in the 60 meter hurdles in NCAA history.  The final Tiger to win an individual title for the team was Lisa Gunnarsson in the pole vault event.  Gunnarsson, the LSU all time leader in the pole vault, registered a clearance of 14′ 7.5″ (4.46 meters) to win the event.  Gunnarsson is the second LSU woman to win this event joining the likes of Rachel Laurent in 2009.

Many LSU track and field athletes were able to put together scoring performances for the Tigers on Saturday.  Abby O’Donoghue was able to earn the silver medal in the high jump competition as she cleared a height of 6′ 2″ (1.88 meters).  Nyagoa Bayak also competed in the high jump and finished with a clearance of 5′ 7.75″ (1.72m) to place seventh in the event.  Jake Norris placed second in the men’s weight throw to record a mark of 70′ 5.25″ (21.47 meters).  Another silver medal was awarded to Eric Edwards Jr. for his time of 7.66 in the men’s 60 meter hurdles.  LSU found continued success in the event as Damion Thomas and Arthur Price were able to add to the scoring total with times of 7.73 and 7.84 to place third and fifth, respectively; the trio combined for a total of 18 points.  Thelma Davies (7.30), Symone Mason (7.34), and Tonea Marshall (7.36) finished in 3rd, 4th, and 5th respectively to score a total of 15 points for the Tigers.  Katy-Ann McDonald, the native of London, England was able to bring home the silver medal as she crossed the finish line in second place in the 800 meter run with a time of 2:05.19.  Akanni Hislop was able to get in on the scoring total for LSU as he scored three points with his sixth-place finish in the 60 meter dash (6.75).

Freshman Davis Bove became the first LSU miler to score in the mile run since 2010 with his time of 4:17.31 to place seventh in the event.  LSU performed well in the 400 meter run as Tyler Terry ran a season best time of 46.01 to place fourth and Amber Anning finished with a time of 52.25 to place third.  The 200 meter dash proved to be important for LSU as two men in addition to Terrance Laird’s title, and two women scored in the event.  On the men’s side, Dylan Peebles (20.74) and Akanni Hislop (20.78) finished in third and fourth place in the race.  Symone Mason (22.76) and Thelma Davies (23.01) placed third and fourth respectively.  Mason’s time of 22.76 was the third fastest time in school history and the fourth fastest time in the NCAA this year.  Alia Armstrong (8.15) and Brittley Humphrey (8.22) each scored for the Tigers in the 60 meter hurdles with fifth and eight place finishes.  LSU received scoring performances from triple jump competitors Christian Miller and Mercy Abire.  Miller finished with a jump of 51′ 2.25″ (15.60 meters) to place 6th for the men and Abire leaped a distance of 41′ 1″ (12.52 meters) to place eighth.  The final events of the SEC Championships were the 4×400 meter relays.  Both the LSU men’s and women’s relay teams scored as they both finished in third with time of 3:06.24 and 3:31.23, respectively.  The men’s team that consisted of Dylan Peebles, Terrance Laird, Dorian Camel, and Tyler Terry registered a season best time.  Like the men’s squad, the women’s team that was made up of Symone Mason, Kiya Oviosun, Brittley Humphrey, and Amber Anning, set a season best time in the event.

The LSU Track and Field will travel to Albuquerque, N.M. to compete in the NCAA Championships on Friday, March 13.