Mahmoud Abdul-Rauf's Jersey is Where it Always Belonged 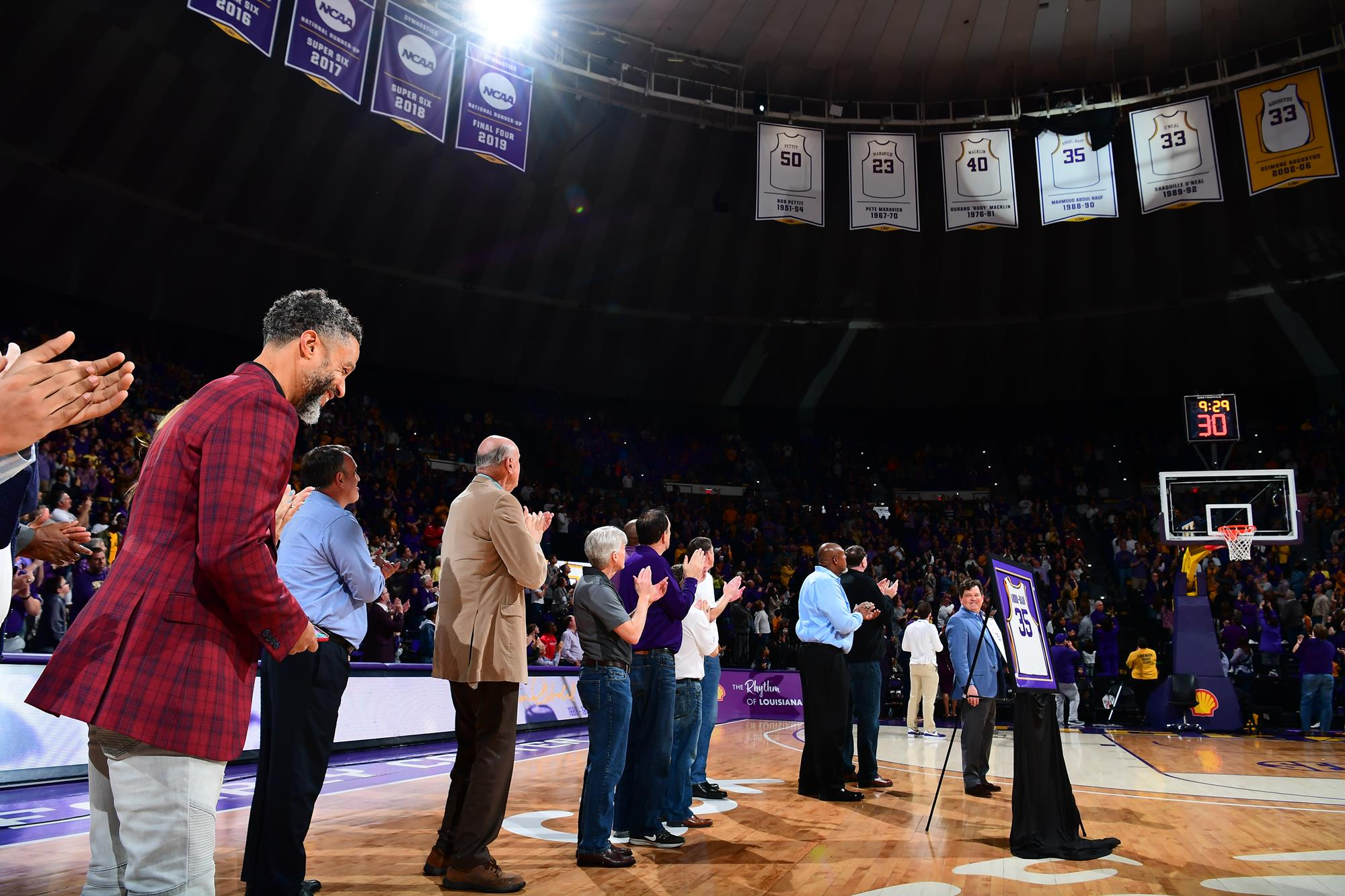 As his jersey came down, so did the tears.

From Mahmoud Abdul-Rauf himself. From his family around him. From his former head coach, Dale Brown.

So much more went into this moment, as Abdul-Rauf’s No. 35 went permanently into the rafters Saturday in the Pete Maravich Assembly Center, than the 1,864 points he tallied in two seasons as a Tiger, or the hundreds of thousands of fans he inspired with his transformative play, or the 30 years that spanned the last time he stepped on the PMAC floor to now.

“Never could I have written this story for myself,” Abdul-Rauf said Saturday.

The story is long, complicated, and beautiful, and its latest chapter unfolded at halftime of LSU’s win over Texas A&M Saturday.

On Friday, Abdul-Rauf spoke at a press conference and wondered what the moment would feel like.

“This is really nothing that I’ve just I’ve never pushed for,” he said. “I’m grateful, extremely grateful for to all of those people who spoke out, who kept the wheels turning, and who wanted to see this happening. This is definitely for them, all the work that they put in for that. I can’t thank them enough for it. I’m still trying to process everything and make sense of it.”

On Saturday, he processed it in real time. Shaquille O’Neal congratulated him from a pre-recorded video, calling his former teammate the greatest player in school history – at a school that has produced its fair share of great players, O’Neal, Maravich, and Bob Pettit, who was also present Saturday, included. So was Rudy Macklin, the last Brown player to see his jersey retired. Brown recorded a pair of videos expressing his love for Abdul-Rauf, calling him one of the nicest players he ever coached.

Question: What do you want to be remembered for?

Mahmoud Abdul-Rauf: “When it’s all said and done, basketball is a tool…Being a great person, standing up for what’s right, that means more to me than the game of basketball.” pic.twitter.com/ZvLQNj4cmY

Brown, Abdul-Rauf said Friday, always said, “Chris [Jackson, Abdul-Rauf’s former name] was a great basketball player, but an even better person. It’s a compliment he still holds dear to his heart today, because Brown helped show him how much bigger than basketball life is.

“When it’s all said and done, basketball is a tool,” Abdul-Rauf said, asked how he hoped to be remembered. “Being a great person, standing up for what’s right, that means more to me than the game of basketball.”

Finally, surrounded by his family and his former teammates, Abdul-Rauf spoke to all the people whose names won’t hang in the rafters at LSU, but whose impact made it possible for his to hang there now: Brown; teammates like Stanley Roberts, Vernel Singleton, and O’Neal; his high school coaches and mentors growing up in Gulfport, Miss.; the LSU fans, past and present; and his family, including his mother – the very mention of whom usually brings him to tears – and his children.

You weren’t alive when I was training all those long hours, he told his children, but I always dreamed of having a family, and you were always in my mind.

Then, the crying really started.

The joy extended for the rest of the day. Fans lined the aisle to shake his hands and ask for autographs. After the game, he walked past the PMAC’s basement gym, where he spent so many hours refining his silky smooth jumper and electric ball-handling.

“I spent a lot of my times in that basement,” he said Friday. “Because for me, basketball was life or death. I didn’t see a future for myself academically, so if I was going to have a chance to be successful, I gotta give everything I have to this game and hope it works out.”

It worked out just fine. Nobody but Abdul-Rauf saw those long hours in the PMAC basement, but they saw the reward of that work in his play. And Saturday, they saw it hanging high above, next to names like O’Neal and Pettit, Macklin and Maravich, Augustus and Fowles.

It took a long time to get there. But Mahmoud Abdul-Rauf’s jersey is finally exactly where it belongs.