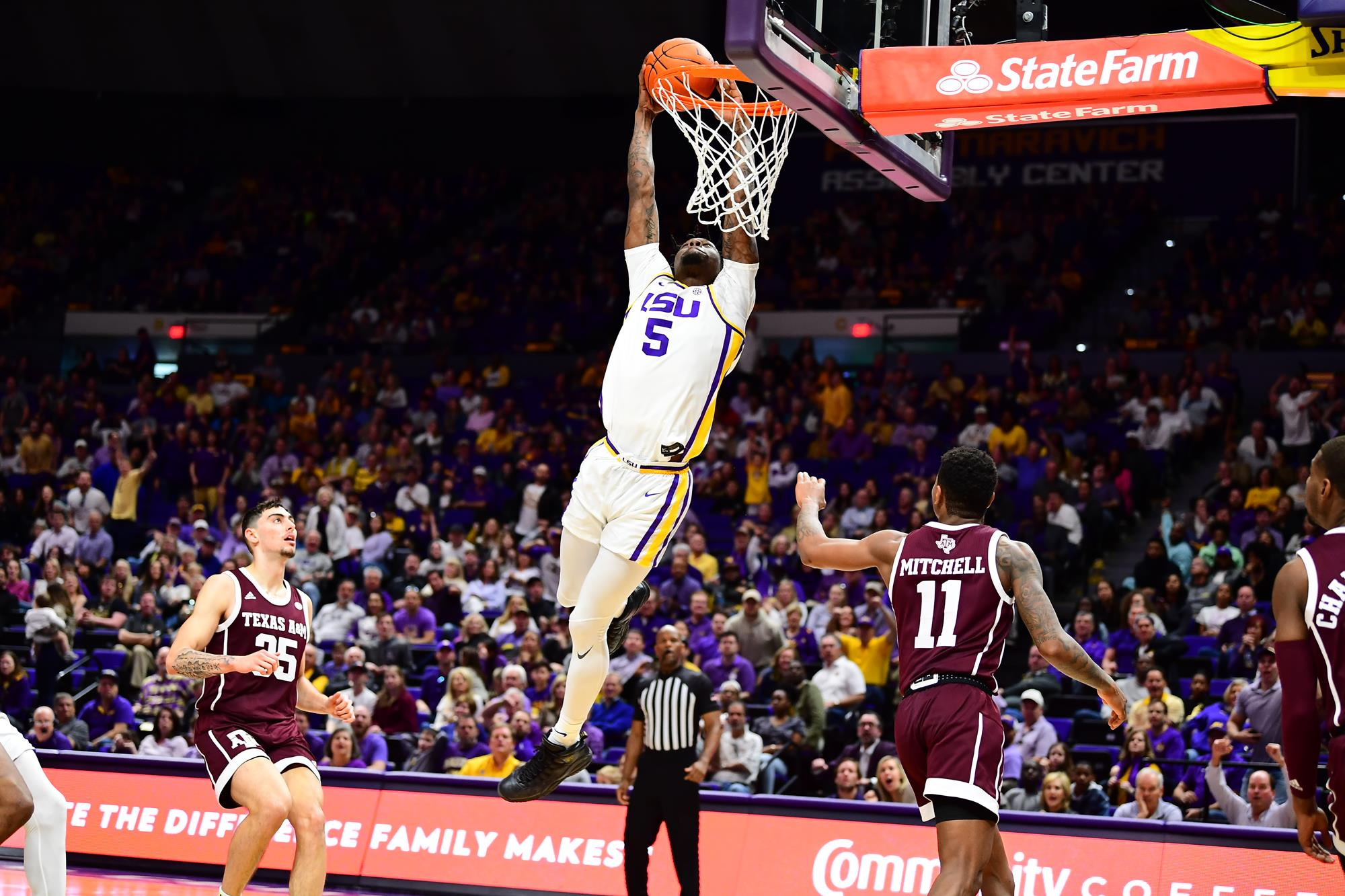 BATON ROUGE – On an afternoon when the crowd at the Pete Maravich Assembly Center welcomed back a star to watch his jersey be unveiled from the rafters of the building, a senior LSU star of the present day helped lead the Tigers to a 64-50 win over Texas A&M Saturday.

Senior Skylar Mays in his next-to-last home game for the Tigers had 24 points, on 7-of-12 shooting with four treys and 6-of-6 at the free throw line to go with eight rebounds, three assists and two steals. Javonte Smart had 14 points with three treys. The pair had six assists and one turnover.

At halftime of LSU’s win, Mahmoud Abdul-Rauf returned to the floor of the Maravich Center as his No. 35 jersey was retired joining Bob Pettit, the late Pete Maravich, Shaquille O’Neal and Durand “Rudy” Macklin who had had their numbers and/or jerseys retired for men’s basketball. Pettit, Maravich’s wife Jackie and Macklin joined Abdul-Rauf on the floor for the ceremony and O’Neal sent a congratulatory message from the Inside the NBA studios in Atlanta.

Coach Dale Brown narrated a video on Abdul-Rauf and his two years at LSU from 1988-90 and on the court were several members of the teams that played with him along with Coach Brown and Abdul-Rauf’s children.

Abdul-Rauf was a two-time SEC Player of the Year, a two-time first-team All-America selection and scored 1,864 points in two seasons, including 965 in his freshman season. He averaged 30.1 points a game in 1988-89 and both the points and average for his first year are NCAA freshman records. Abdul-Rauf, who will turn 51 in early March, has just signed for another season with the Big3 League.

The Tigers with the win are now 20-9 on the season and 11-5 in the Southeastern Conference. With Florida’s loss in the game at Tennessee and Kentucky’s win at home over Auburn Saturday afternoon, the Tigers have moved back into a tie for second place with Auburn, one game ahead of Florida. LSU’s magic number to clinch a double bye and a top four seed for the SEC Tournament is one LSU win and/or loss by teams behind LSU.

The Aggies got out 3-0 on the Tigers, but LSU scored the next eight points to go up 8-3 and a lead they would not lose the rest of the way. LSU would built as much as a 13-point first half advantage and led 28-20 at the half. Neither team shot particularly well in the first 20 minutes as A&M was 7-of-23 from the field and LSU was 11-of-33.

After LSU opened up a 12 points advantage four minutes into the second half, the Aggies were able to cut the game down to seven points five different times over the next 10 minutes. But each time, the Tigers needed it, Mays came through with big shots, scoring 19 points in the second half.

LSU also got eight points from Darius Days, seven points from Marlon Taylor (who started for the first time this season) and six points from Trendon Watford.

The Tigers will play their final road game of the regular season on Wednesday night at 6 p.m. against Arkansas in Fayetteville (SEC Network, LSU Sports Radio Network) before finishing the regular season at 1 p.m. on Saturday, March 7, against Georgia at the Maravich Center. The senior tribute ceremonies for LSU will be held prior to that game.

Opening Statement…
“It was a good day. I thought we played with really good effort, energy, and physicality. We settled into the game. At first, we wanted to make the game faster paced but once we had the working margins, we settled in and played into their game and took longer offensive possessions. Skylar (Mays) and Javonte (Smart) played tremendous for us. Skylar went to scoring and Javonte did a great job controlling the game, both of them bouncing back from tough outings in Florida. Thought our whole team bounced back. We only turned the ball over four times which means we got a lot of shots on the basket. It was a much-needed win and proud of their effort.”

On the defense holding Texas A&M to 50 points…
“Usually 50 points is about a half for us. We did a good job. We were at the point of attack and all that. They have some guys that are somewhat limited so you can help off a little bit. Of course, No. 35 (Yavuz Gultekin) hits a three on us, his third three the entire season. It allowed us to help down on (Josh) Nebo. The matchups were just a little better for us to create a defensive gameplan. When they only have three guys out there who are prolific scorers, we should be able to defend five-on-three. I thought Marlon gave us good energy, it was good getting him back out there. I know (Savion) Flagg scored 17, but he did a good job on him. He denied him, got the steal and the lay-up. I think putting him in the lineup really spurred him on and helped our guys as well.”

LSU Guard Skylar Mays
On improving their defense…
The majority of our practices have been for defense, but I think the biggest thing that we did out there was that we just competed out there and took pride in it today.  It shows what we are capable of, and we are going to build on it.”

“We are at our best when Javonte (Smart) is aggressive and looking to score.  We need him to score for us and he’s doing that.  He’s playing his best basketball and we are playing our best basketball.  As for everyone else, it was a big steppingstone not letting how we were doing offensively dictate how we are defensively.  We did a great job today.”

On bouncing back from the loss to Florida …

“Bad games come with it, and I just wanted to make sure I didn’t put two bad ones back to back.  I wanted to be aggressive and try to make plays.”

On what they did on defense today…

“Last game we gave up a lot of buckets so lately we have just been working on defense.  Every day at practice we have been getting extra defensive schemes in.  I’ve been trying to work on my defense.  Today Skylar (Mays) was telling us to keep them under fifty points and we tried our hardest to do that.”

“Late in the game I could do it, but I believe in Skylar (Mays) and wanted him to take us home.  Whatever I can do to help this team win, I’m with it.”

On what he saw from the defense …

“They’re really good. All credit to them. Statistically we’re not great in many offensive categories regardless of opponent. I thought that their size, their length, their talent, their scheme, all of it for sure impacted us.”

On doing everything right but not getting the win …

“Thanks for saying that. Our recipe for it to be a game is very specific. We need to make more than one free throw, we do. We need to try to get in the bonus both halves, as early as we can. They’re first in the league in offensive rebound percentage. I think that’s a portion, in my opinion, of why their offense is the fourth-most efficient in the country. They’re able to get so many put backs right at the rim. That was a big part of the game in College Station. I think in College Station they shot 60 balls, 38 of them were from three. That’s relative to how we need to play. They missed 31 balls but they got 16 of them back. So they had more offensive rebounds than we did defensive rebounds. We were a little better in that regard today. A portion of it was we were trying to gear the tempo down a little bit but our turnover rate really hurts that in todays’ game. I thought at times, particularly in the second half, we were able to do some of the things that we wanted to do. Not near as consistent as you have to be to beat a team as talented and well coached as they are.”