No. 2 Beach Wins Matchup against No. 1 UCLA in Front of Record Crowd 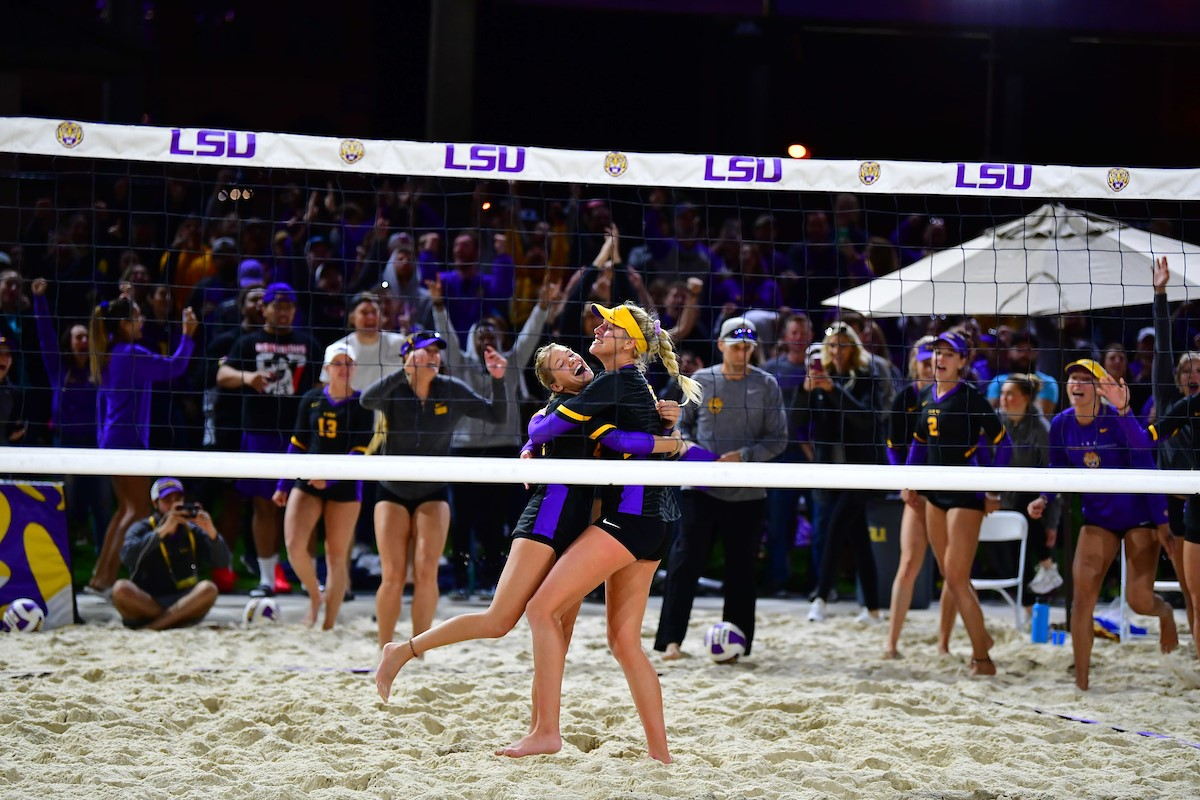 BATON ROUGE – In front of an LSU Beach Volleyball Stadium record 2,407 fans, No. 2 LSU took down No. 1 UCLA, 3-2, for the second time in as many weeks Saturday evening at the Tiger Beach Challenge and coach Russell Brock earned his 90th career victory.

“I honestly couldn’t have ever dreamed of that,” said Coach Russell Brock of the standing room only crowd. “The vision was – let’s build this thing, let’s build a good product and let’s fill it up. To have it packed out and have a match like that – I envisioned a lot of things with this program, but that was more than I could have possibly imagined.

The Tigers handled business in their first match of the day, sweeping Houston Baptist, 5-0. That match finished a quarter after 3 p.m. CT, two hours before the top-two showdown.

As 5:15 inched closer, the stands started to fill for what was sure to be a thriller. Last weekend in Hawaii, LSU and UCLA split a set of matches. The Bruins won the Saturday match before the Tigers rebounded to win on Sunday in the championship of the Duke Kahanamoku Beach Classic.

This weekend’s match began with Courts 4 and 5. Kelli Agnew and Taryn Kloth continued their dominance on Court 4. The reigning National Pair of the Week remained perfect in the sand. After earning a two-set win against Houston Baptist, Agnew and Kloth earned their seventh straight-set win of the season in as many matches, taking down the Bruins on Court 4, 21-17 and 21-17.

On Court 5, Allison Coens and Hunter Domanski dropped the first set, 21-9, but bounced back strong in set number two, 21-18, to force a third set. There they fell, 15-11, and UCLA evened the match at one as the second wave of matches was set to begin on Court 1, 2 and 3.

Claire Coppola and Kristen Nuss put the Tigers up 2-1 with a straight set victory on Court 1, 21-18 and 22-20. With that the attention shifted to Court 2, already in a third set.

“I’m so proud of everyone,” said Nuss. “Everyone is playing so well and thriving off each other and getting wins when we need to. We’re picking each other up.”

Jess Schaben and Sydney Moore battled to a 22-20 first set win, before dropping the second set, 15-11. The electric crowd was glued to Court 2, knowing this could be the deciding set.

Leading 14-11, Schaben served the ball and on the return UCLA hit a ball that appeared to be out. After a UCLA dispute, the referee kept the point with the Tigers as LSU clinched the match over the top-ranked Bruins.

Ashlyn Rasnick-Pope and Toni Rodriguez fell in the third set to UCLA, but the match had already been decided.

“We have more,” said Brock. “That’s not our best. We absolutely have more and have the ability to be better than we were tonight.”

The Tigers will close out the Tiger Beach Challenge with three matches on Sunday, beginning with Texas A&M-Corpus Christi at 9 a.m. LSU will face Tulane at noon before finishing the weekend at 2 p.m. against Spring Hill College.