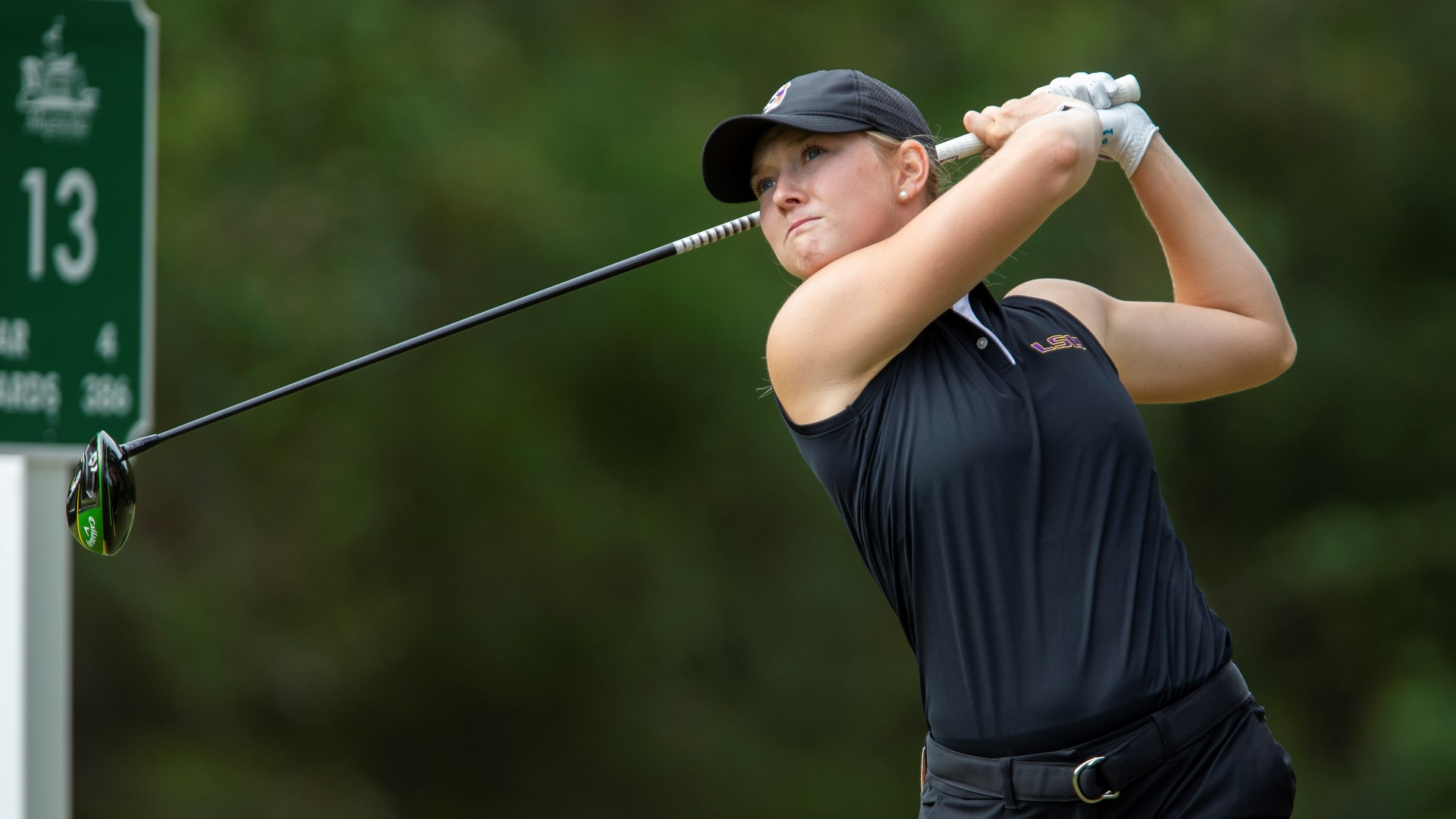 LSU has finished in the Top-3 in all five tournaments played this season, following a second-place showing at the IJGA Collegiate Invitational to start the Spring portion of the season. The Tigers picked up wins at the Princess Anne Invitational and the Magnolia Invitational during the Fall.

The Tigers have dropped their team scoring average over 12 strokes over last season and are sitting at 285.33 heading into this week’s tournament. First-year players Ingrid Lindblad (69.53), Latanna Stone (71.67) and Kiana Oshiro (72.83) are on pace to have three of the best single-season performances in LSU history.

LSU is currently ranked No. 13 in the nation by Golfstat, moving up the rankings five spots following the IJGA. Rookies Ingrid Lindblad and Latanna Stone, juniors Kiana Oshiro and Kendall Griffin, and sophomores Alden Wallace and Presley Baggett will represent LSU on the course in Panama City.

“After finishing second last week, and really wanting the win, the ladies are ready to get back into action and contend for another title,” said second year head coach Garrett Runion. “We spent last week reviewing the previous tournament and preparing for this one. While no one has played this course before, we should feel comfortable with similar weather to what we’ve been practicing in lately as well as the same grass and style of course most of our team is used to.”

Lindblad, the winner of the Magnolia Invitational, has shot par or under in 11 of her 15 rounds, including all three rounds of the IJGA. The native of Halmstad, Sweden, leads the team with a 69.53 stroke average. She has posted seven of the top 11 rounds of the season on the team, all at 3-under or lower. Her lowest round of the season was a 6-under 66 in the first round of the IJGA Collegiate Invitational on February 16. Lindblad currently ranks No. 2 in the nation and second in the SEC on the Golfstat Player Rankings list.

Lindblad is ranked No. 4 in the World Amateur Golf Ranking and has accepted an invitation to compete in the Augusta National Women’s Amateur, April 1-4, 2020. She posted four Top-5 finishes this season.

Stone, also a freshman, has a stroke average of 71.67, the second-lowest on the team, and five of her 12 rounds played are at par or under. Stone has three Top-20 finishes so far in her rookie season, including a second-place finish at Battle at the Beach.

Oshiro is third on the squad with a 72.83 scoring average. The junior transfer posted five rounds of par or under in the Fall over nine rounds played and is scheduled to compete as an individual in Panama City.

Griffin and Wallace are the only other members of the squad to play in all five tournaments. Griffin dropped her average to 72.93 after a solid performance at the IJGA that included two rounds of par or under. Wallace also dropped her average to 73.73 after buckling down to shoot 6-under over the last two rounds of the IJGA. Baggett gets the call this week for the fifth spot in the starting lineup. She is averaging 74.44 strokes over nine rounds in the Fall and is making her first tournament appearance of the Spring.

“Even though it may be a little far from home, Latanna and Kendall are extra excited to go back to their home state of Florida and play a tournament,” said Runion. “After this tournament we’re home for two days before we leave again. So we’ll be looking forward to getting off to a nice start and carrying that momentum into next week where we play in a field that could be stronger than the national championship at the Darius Rucker Intercollegiate”

In addition to its No. 13 ranking posted by Golfstat, LSU also ranks No. 13 in the latest Golfweek and No. 14 in last week’s WGCA poll.

LSU is one of ten in the field that includes No. 12 Alabama, No. 40 Clemson, host No. 26 Florida State, Kansas State, Toledo, Missouri, Coastal Carolina, Memphis and South Florida. The Tigers are paired up with Clemson for the first two rounds of two-somes.

Florida State is coordinating the tournament at the Bay Point Golf Club. The tournament will play at a par of 72 over 6,290 yards.

Round One will be a shot gun start at 8:00 a.m. CT on Saturday. LSU will be starting from Holes four through seven for Lindblad, Stone, Griffin, Wallace and Baggett, while Oshiro will start at Hole 17 with an individual from USF. Round two will follow immediately after the completion of the first round. Round Three will begin between 8 and 9:50 a.m. CT on Sunday, with the final round played in three-somes.