Henry, Hill Combine for 16 Strikeouts in 4-3 Win Over Texas 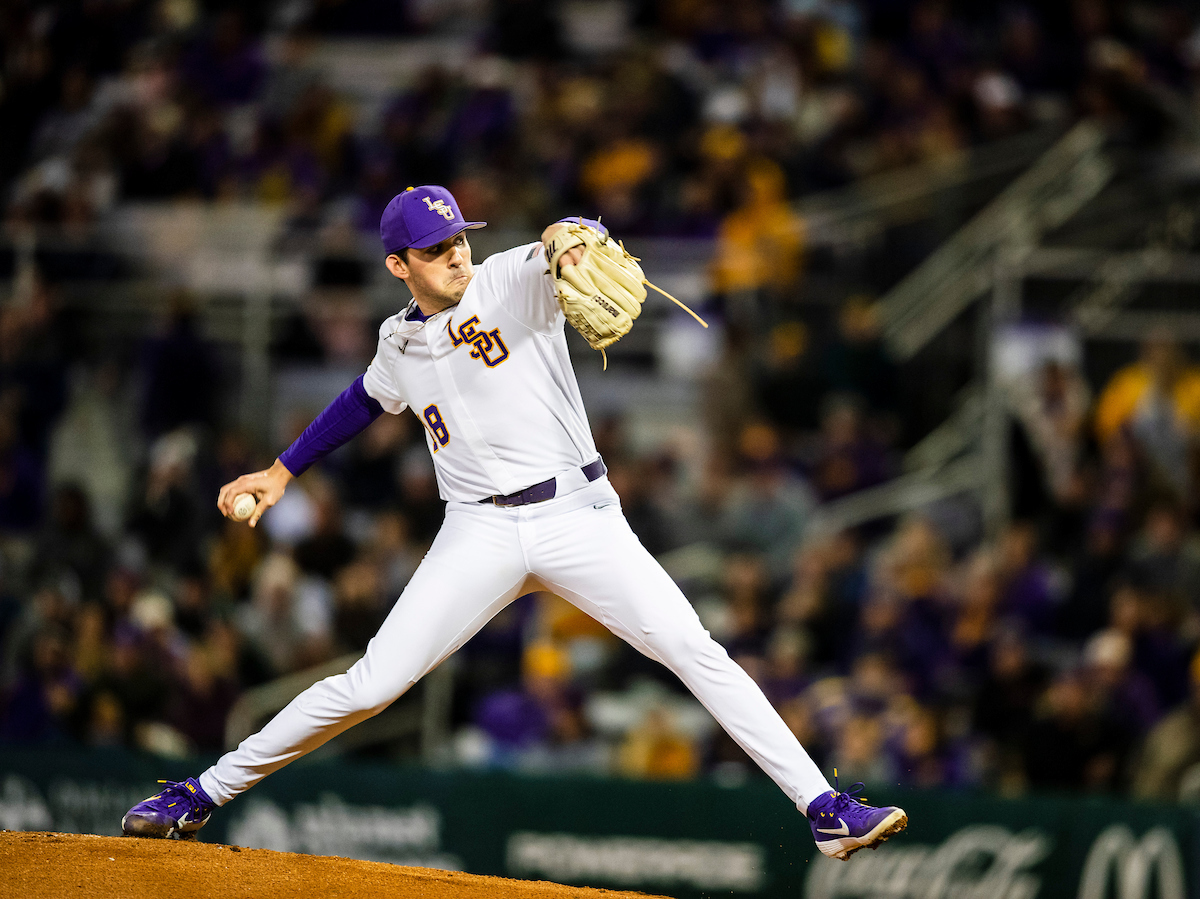 The Tigers will play Baylor in the second game of the Shriners Classic on Saturday at 3 p.m. CT. The game will be available on Cox Sports Television, AT&T SportsNet and online at MLB.com. Fans can listen to the game on the LSU Sports Radio Network, including 98.1 FM in Baton Rouge, or online at LSUsports.net/live.

With the win, LSU improved to 7-3 on the season, while Texas dropped its first game of the season and is now 9-1.

“It was a really good baseball game,” said LSU coach Paul Mainieri. “I can’t remember the last time we struck out our opponent 16 times in a game. When you run arms like Cole Henry and Jaden Hill out there, it’s pretty exciting to watch.”

Henry (2-1) got the start and earned the win with six innings of work, firing 92 pitches. He allowed three runs – two earned –  on four hits with two walks and 10 strikeouts.

“Cole threw 35 pitches in the third inning, and I was really close to taking him out of the game,” Mainieri said, “but he zipped through the fourth, fifth and sixth innings, and he was begging to go back out for the seventh.”

Hill picked up the save – the first of his LSU career — with three dominant innings, allowing no hit with six strikeouts.

“Jaden Hill is a special talent, he’s got a great arm and he’s a great athlete,” Mainieri said. “He’s not just a hard thrower, he’s got a good slider and change-up, and he was dynamic tonight. We’re bringing him along slowly (after last season’s elbow injury); we want him to feel confident in his health and build up his stamina. He’s going to continue to get better and better.”

LSU put up two runs in the bottom of the second to take the early lead over the Longhorns. Rightfielder Daniel Cabrera hit a leadoff single up the middle and designated hitter Saul Garza followed with an RBI triple to center that scored Cabrera.

With Garza at third, second baseman Cade Doughty hit a two-out infield single that allowed Garza to score and give LSU a 2-0 advantage.

The Longhorns answered with two runs in the top of the third to tie the game. Catcher DJ Petrinsky hit a leadoff solo shot to left center, and later in the inning second baseman Brenden Dixon scored on a sacrifice fly by first baseman Zach Zubia.

Texas took the lead in the fourth as shortstop Trey Faltine scored an unearned run on a sac fly by Petrinsky. Faltine was hit by a pitch to start the inning and moved to third on a throwing error by third baseman Zack Mathis.

The Tigers reclaimed the lead in the bottom of the sixth as Cabrera belted a two-run homer over the right field wall. The dinger was the second of the season for Cabrera, who now has 22 career home runs.

“We got a big swing from Daniel Cabrera,” Mainieri said. “We got two big swings, really; Saul Garza crushed that ball off the wall to give us the lead early.”

Bryce Elder (2-1) was charged with the loss for Texas, as he tossed 6.1 innings, allowing four runs on six hits with two walks 10 strikeouts.

TICKETS
Adult and youth daily tickets and three-day tournament passes are available online at Astros.com/CollegeClassic. Fans can purchase premium tickets or group tickets, for groups of 20 or more, by calling 713-259-8030. Daily tickets purchased in advance are available for $20 for adults and $10 for youth (ages 14 and under). Three-day tournament passes can be purchased for $42 for adults and $24 for youth. Select parking in the Astros controlled lots will be sold for $15 and $10 (Lot A, Lots B and C). Diamond parking will be available for purchase during the tournament. For interest in hosting a special event at the ballpark over the weekend, please call 713-259-8800. Student tickets will also be available for the tournament, but will only be sold at the Astros box office.