Aifuwa Has Big Game In Win Over Vanderbilt 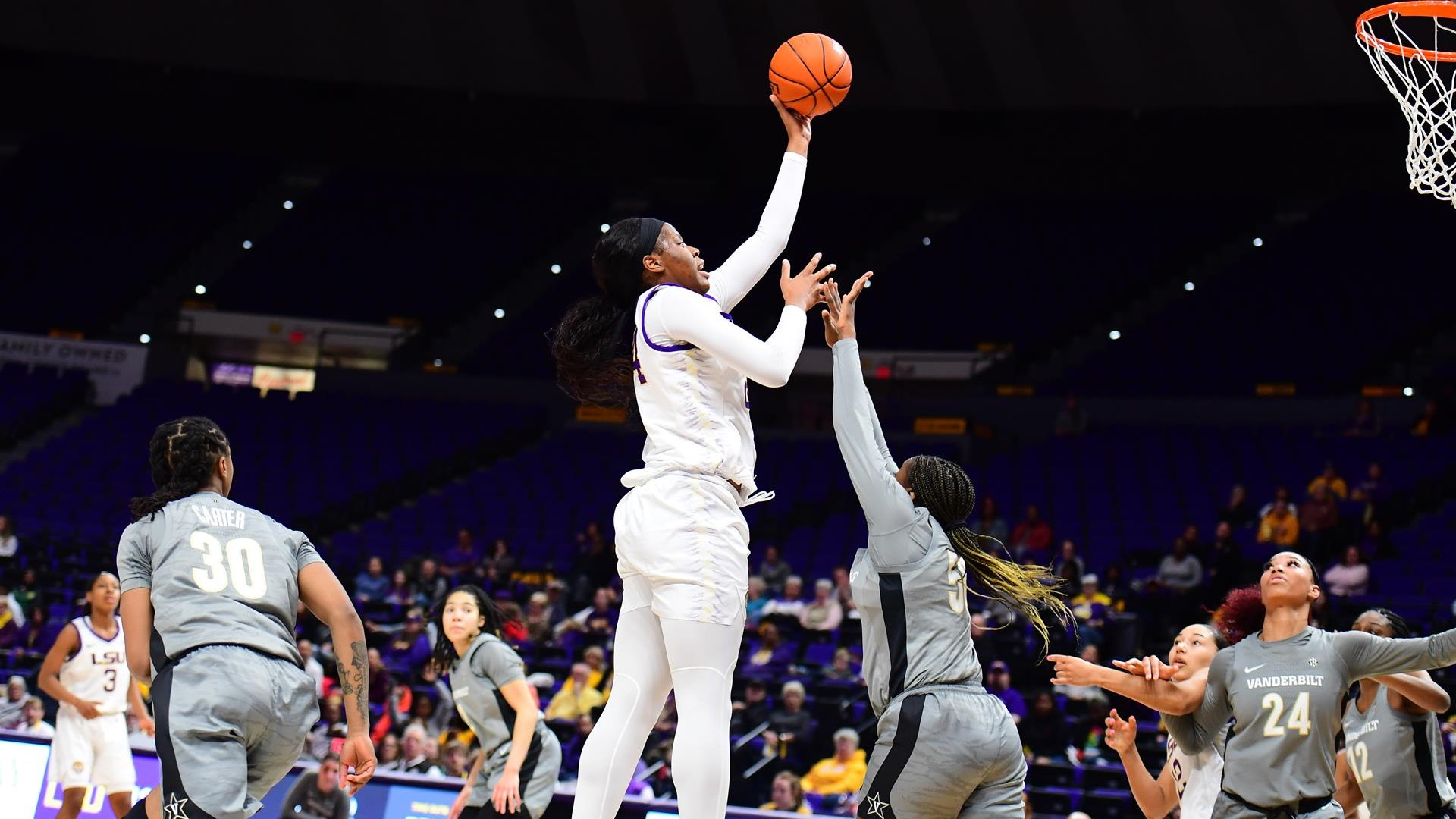 Redshirt junior Faustine Aifuwa led the way for LSU with 18 points, eight rebounds and six blocked shots. Aifuwa surpassed 700 career points with her first two points of the game, finishing the night with 716 total. Junior Khayla Pointer contributed in a big way with 12 points and led the team with 7 assists. Senior Jaelyn Richard-Harris hit a momentum-changing three-point basket late in the fourth quarter and finished with nine points, while junior Awa Trasi added 10 points and five rebounds to the cause. Junior Jailin Cherry also had a strong overall performance with career highs of five assists and six steals to go along with eight points and five rebounds.

The Tigers hit the road for their final SEC game of the regular season to face Arkansas on Sunday, March 1. The game is slated for a 1:10 p.m. start and will be streamed on the SEC Network Plus. Live stats will be available.

On what she did to motivate the team down the stretch…

“I don’t even want to tell you my speech right now. All I said was ‘We’ve got to play harder.’ That was pretty much the gist of it—we’ve got to play harder and how bad do you want this? We’re in front of our fans, our family, it’s the last game in the PMAC. We have a thing about us where we want to make sure we protect home court, and we gave one away last week, but let’s not continue to do what we did last time. I felt that we played a little bit more aggressive, but I also told them you’ve got to play more downhill. We were not aggressive enough attacking the rim, and I think that was the difference when we were trying to attack the basket. We made the extra pass, we got some good looks, but our defensive effort in the fourth quarter separated us. We did a nice job of trying to bang and be a little bit more physical. We didn’t give up as many transition baskets in the fourth quarter.”

“She knocked down a huge three for us and gutsy of her to take that initiative, to knock that down. We had some key plays, her three, when the shot clock was winding down on the right-hand side, Jailin Cherry hits a jumper that rainbows in and those were all momentum plays for us. When you have a senior like Jaelyn Richard-Harris, she was locked in and she knew that she had to come up big for us, but the play of our bench was key, too. I thought we got some really good minutes from Jalaysha Thomas. I thought she came in, was very physical, set herself as an offensive threat by being physical. She was doing the work early and we were able to get her some looks inside. Vandy is a very good basketball team, they’ve got some really good players and this league is just one of the best leagues to play in. Night in and night out it is going to be a battle and I’m glad this group decided to finish on a good note here in the PMAC. We’ve got one more regular season game to go and we’ve got a big opponent in Arkansas on Sunday.”