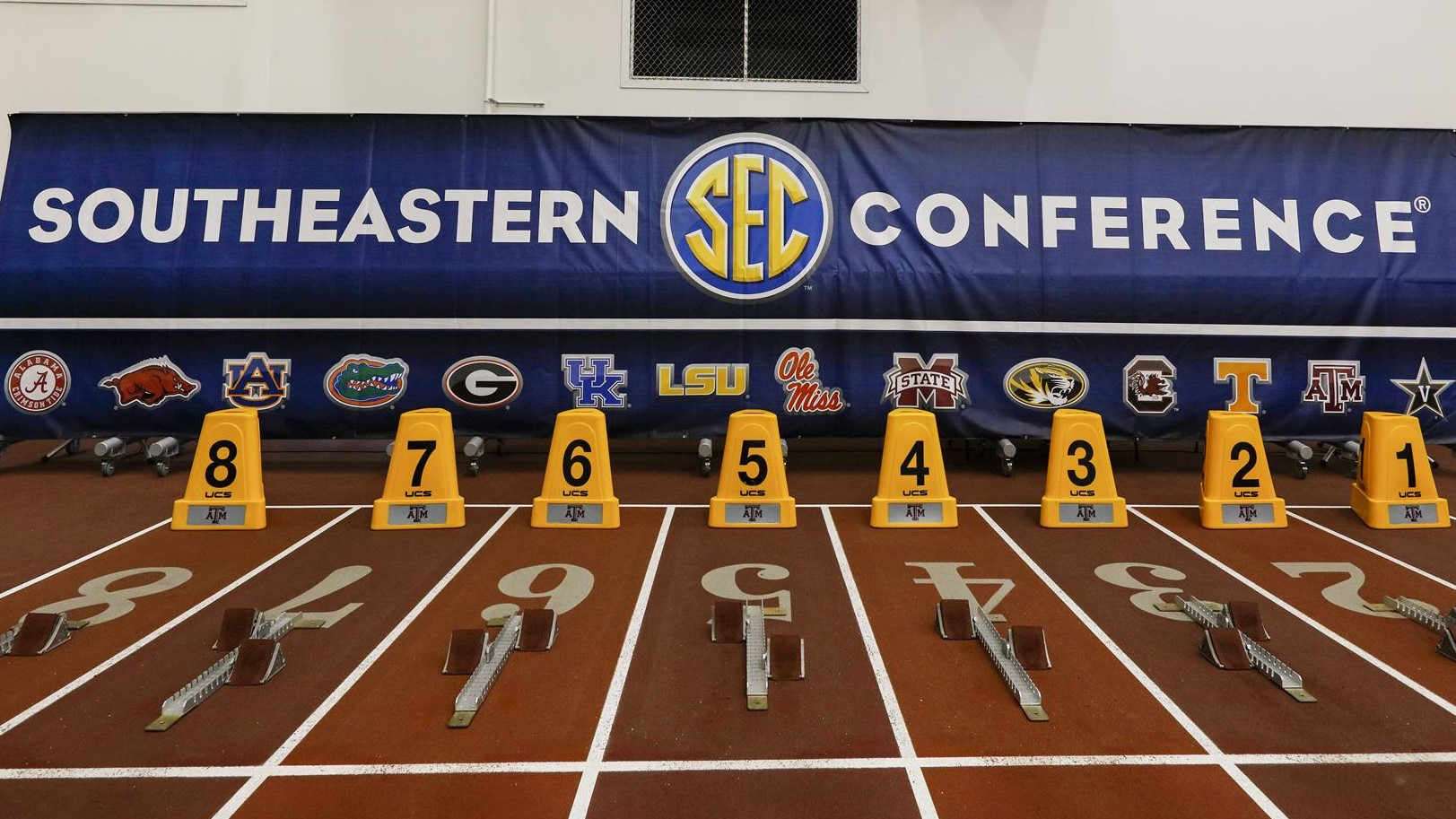 Baton Rouge, La. – The LSU track and field program will make the trip to College Station, Texas, for the 2020 SEC Indoor Championships. The two-day meet will begin Friday afternoon and conclude Saturday evening at the Gilliam Indoor Track Stadium. LSU enters the meet with the No. 1 women’s team in the country and the No. 2 men’s squad in the nation.

LSU will take 41 athletes (23 women, 18 men) on the trip to College Station for the first postseason meet of 2020. Both days of action will be streamed on WatchESPN; Friday’s coverage will begin at 5:10 p.m. CT, and Saturday’s viewing window will begin at 3:55 p.m. A re-air of the SEC Championships will take place Sunday night at 7 p.m. on the SEC Network. Dwight Stones, Dan O’Brien, Jill Montgomery, and Larra Overton will be providing the coverage.

LSU enters the meet as the highest ranked squads at the conference meet. The NCAA Division I Indoor Track & Field National Rating Index has the LSU women ranked No. 1 in the country and the men’s squad ranked second. LSU is the only school in America to have both women’s and men’s squad ranked inside the top five by the ratings index. Other women’s SEC teams that are ranked include: No. 2 Georgia, No. 3 Arkansas, No. 5 Texas A&M, No. 6 Kentucky, No. 11 Florida, No. 17 Alabama, and No. 20 Ole Miss. Other ranked squads on the men’s side are No. 3 Florida, No. 6 Georgia, No. 8 Tennessee, No. 10 Arkansas, No. 13 Texas A&M, No. 19 Kentucky, and No. 23 Alabama.

LSU has three athletes returning to the 2020 SEC Indoor Championships that won an individual title a year ago. Rayvon Grey (long jump), JuVaughn Harrison (high jump), and Abby O’Donoghue (high jump) are the three athletes who won SEC titles in 2019. Harrison (No. 2 in the high jump), O’Donoghue (No. 2 in the high jump) and Grey (No. 3 in the long jump) are near the top of the SEC rankings in their events this season.

A full list of SEC rankings can be viewed at tfrrs.org.

LSU has five athletes headed into the conference meet with the best marks in the SEC this season. Juco transfer Terrance Laird owns the SEC and NCAA lead in the 200 meter dash with a readout of 20.43. Likewise, Thelma Davies owns the SEC lead and No. 2 time in the NCAA this season in the women’s 200 meter dash with a career best time of 22.80. The 60 meter hurdles are the same way – LSU owns the top times in each event. Tonea Marshall’s season-best altitude-converted readout of 7.88 ranks No. 1 in the SEC and NCAA; Eric Edwards Jr. career best of 7.61 in the men’s 60 meter hurdles is the fastest in the SEC this season. The final favorite based off marks during the 2020 season is Lisa Gunnarsson in the women’s pole vault; her season best clearance of 14′ 7.25″ (4.45 meters) is ranked No. 1 in the SEC by 2 ¾ inches.

LSU’s championship pursuit will come down to a few key events on each side. The women’s squad has three events in which it could easily score over 12 points in. The women’s 200 meter dashing duo of Thelma Davies and Symone Mason are both ranked inside the top five of the conference in that event. Same goes for Abby O’Donoghue and Nyagoa Bayak in the high jump; they rank No. 2 and No. 5 in the SEC respectively. The event that will most likely result in the most points for the Tigers on the women’s side is the 60 meter hurdles. Tonea Marshall (7.88@) and Alia Armstrong (7.95) rank one and two in the conference in the event, and then throw in scoring possibilities from Brittley Humphrey and Milan Young and the Tigers could accrue over 20 points in the event.

Just like the women, the men’s best chance to score big will come in the 60 meter hurdles. Eric Edwards Jr (7.61), Damion Thomas (7.68) and Arthur Price (7.81) all have top-eight times conference wise. Edwards Jr.’s time is the fastest in the conference, Thomas’ ranks No. 4, and Price currently rates No. 8. Terrance Laird (No. 1 SEC) and Akanni Hislop (No. 5 SEC) both rank highly in the 200 meter dash in the SEC as well. Then, the best long jumping duo in the country, Rayvon Grey and JuVaughn Harrison, will look to go big in that event for big points. Grey and Harrison swept NCAA long jump titles in 2019 with Grey winning indoors and Harrison winning outdoors.

LSU has three seniors who have scored at every SEC indoor meet of their career. Those three are Brittley Humphrey, Tonea Marshall, and Christian Miller. Humphrey has scored in a total of five events; the 60 meter hurdles all three years, the DMR in 2018, and the 4×400 meter relay in 2019. Marshall has run in every single final of the 60 meter hurdles the past three years alongside Humphrey as well. Miller has scored points in the LSU triple jump the past three seasons with his best finish coming a year ago in fourth place.

The aforementioned SEC indoor champions of JuVaughn Harrison, Rayvon Grey and Abby O’Donoghue have scored a total of eight times at the indoor conference meet. Harrison, a junior, has scored in both the long jump and high jump in each of his first two seasons for the Tigers, Grey won the SEC long jump title in 2019 and scored in 2017, and O’Donoghue, the 2019 SEC high jump champion, has scored in both 2018 and 2019.

Damion Thomas (60 meter hurdles) and Jake Norris (weight throw), both juniors, have scored for LSU at the SEC indoor meet the past two years in their respective events. Akanni Hislop registered points for LSU in both the 60 meters and 200 meters at the 2019 SEC Championships.

Nineteen LSU athletes have either improved upon or made their way into the LSU top-10 lists this season with twelve of those coming at the Tyson Invitational (Feb. 14-15).  Abby O’Donoghue broke the LSU school record for the second time in as many meets with her clearance of 6′ 2.75 (1.89 meters); the clearance of 6′ 2.75″ (1.89m) replaced her previous mark of 6′ 2″ (1.88 meters) as the top performance in LSU history in the event.  Nyagoa Bayak also recorded an LSU top-ten mark at the Tyson Invitational in the high jump as she cleared a height of 5′ 11.5″ (1.82m) to rank sixth in school history.

Eric Edwards Jr.’s time of 7.61 in the 60 meter hurdles was good enough to rank as the third best time in school history.  Alia Armstrong registered a top ten performance in the 60 meter hurdles with a time of 7.95 to rank third in LSU history.  Armstrong’s readout is also the top time for a freshman in the history of the program.  Terrance Laird, the SEC Men’s Runner of the Week, added his name to LSU record book in two events – the 60 meters (6.66/ No.8) and the 200 meters (20.43/ No. 2).

JuVaughn Harrison registered an LSU top ten performance in both the high jump and long jump.  His clearance of 7′ 5.75″ (2.28m) in the high jump ranks as the second best mark in school history, whereas his leap of 26′ 7.25″ (8.11m) is the fourth longest jump in the history of LSU. Thelma Davies registered the third best time in school history (22.80) in the 200 meter dash.  Finally, Amber Anning entered the LSU top ten list with a time of 52.22 to rank third in LSU history.  Other top-10 LSU marks registered in 2020 below:

LSU is the only school in the nation to currently have a female and male on The Bowerman Watch List. JuVaughn Harrison was named to the national list for the second time of his career on Feb. 6, and Tonea Marshall made her watch list debut on Feb. 5. Harrision currently ranks No. 2 in the nation in the long jump (26′ 7.25″/8.11 meters) and No. 3 in the high jump (7′ 5.75″/2.28 meters); he has won three event titles this season. Marshall caught the eyes of the watch list committee when she ran the fifth-fastest time in NCAA history over the 60 meter hurdles in mid-January. Marshall ran a personal best time of 7.86 in the 60 meter hurdles at the Corky Classic (Jan. 18) to become the third-fastest hurdler in NCAA history over that distance. She has won three event titles in the 60 hurdles this season and has run sub-eight seconds in the 60 meter hurdles five times in a row.