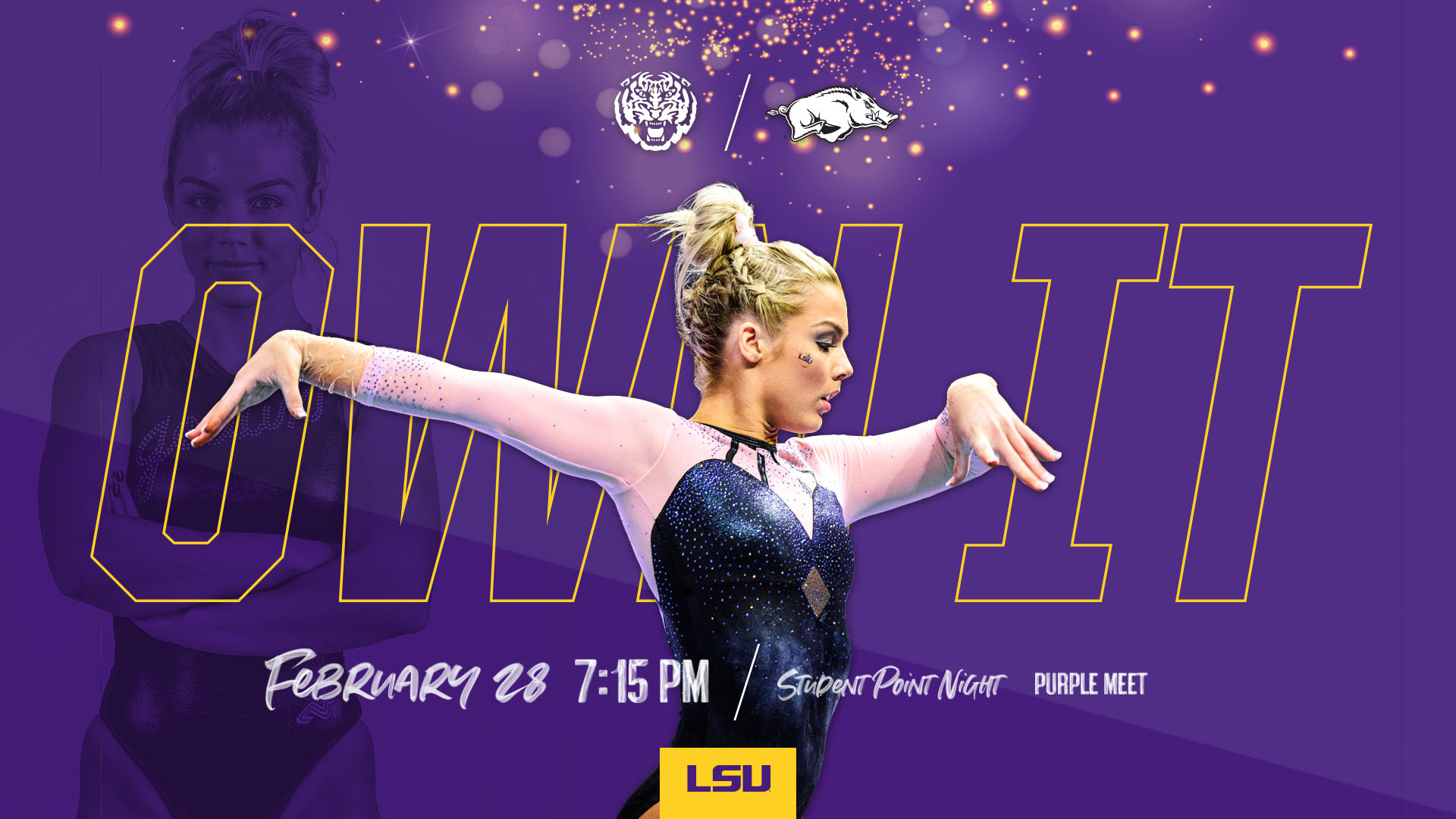 BATON ROUGE – The fifth-ranked LSU gymnastics team will return to the Maravich Center to take on No. 14 Arkansas in the final Southeastern Conference regular season meet of 2020 at 7:15 p.m. CT Friday.

The meet will be streamed live on SEC Network+ through WatchESPN.com and the app. First vault is set for 7:35 p.m. with Garrett Walvoord, Lori Strong-Ballard and Kaleigh Dickson-Abboud on the call.

Meet Promotions
Friday night is student point night inside the Maravich Center. There will be t-shirts for LSU Students in the arena.  Fans are also encouraged to wear purple to the meet.

Arrive Early
With large crowds expected for the meet on Friday, LSU officials are encouraging all fans to arrive to the PMAC early. Doors for students will open at 5:30 p.m. The remaining doors to the arena will open at 5:45 p.m.

Buy Tickets before Friday
Fans who have not purchased tickets yet are encouraged to buy ahead of time to avoid lines. Tickets for the meet are available at www.LSUTIX.net or by calling the LSU Ticket Office at (225)578-2184 or toll-free at (800)960-8587. LSU students are admitted free with a valid student ID.

Last Time Out
LSU posted its third-straight 197-plus team score at No. 18 Missouri. The Fighting Tigers improved to 10-2 with the victory and 4-2 in SEC meets. Freshman Kiya Johnson won the floor title with a 9.925. Junior Sami Durante also won the bars title with a 9.90 and senior Kennedi Edney scored a 9.90 for the vault win.

Johnson is one of Nation’s Elite Gymnasts
Although she is a freshman, Johnson has proved to be one of the top gymnast in the nation. The Dallas, Texas, native owns 22 titles already this season with seven on floor, six in the all-around, five on vault, two on beam and one on bars. Johnson owns two perfect scores this season with one on vault and beam respectively. She also owns career highs of 9.90 on bars, 9.975 on floor and 39.75 in the all-around.

Series Between LSU and Arkansas
LSU owns the all-time series over Arkansas, 36-5-1 with a record of 28-4-1 in the regular season. The Tigers are 7-1 against the Razorbacks inside the Maravich Center and have won 17 straight in the series.

Tigers in the Rankings
With the first rankings consisting of NQS, the Tigers own top-10 rankings on all four events. LSU is second on vault, fourth on bars, sixth on beam and 10th on floor. Johnson owns the top spot on floor, second in the all-around and third on vault. Edney and fellow senior Ruby Harrold rank seventh and 15th respectively on vault. Harrold and Durante are both ranked 15th on bars and Reagan Campbell, Johnson and Edney are all ranked 16th on beam.