No. 2 LSU to Host No. 1 UCLA at Tiger Beach Challenge 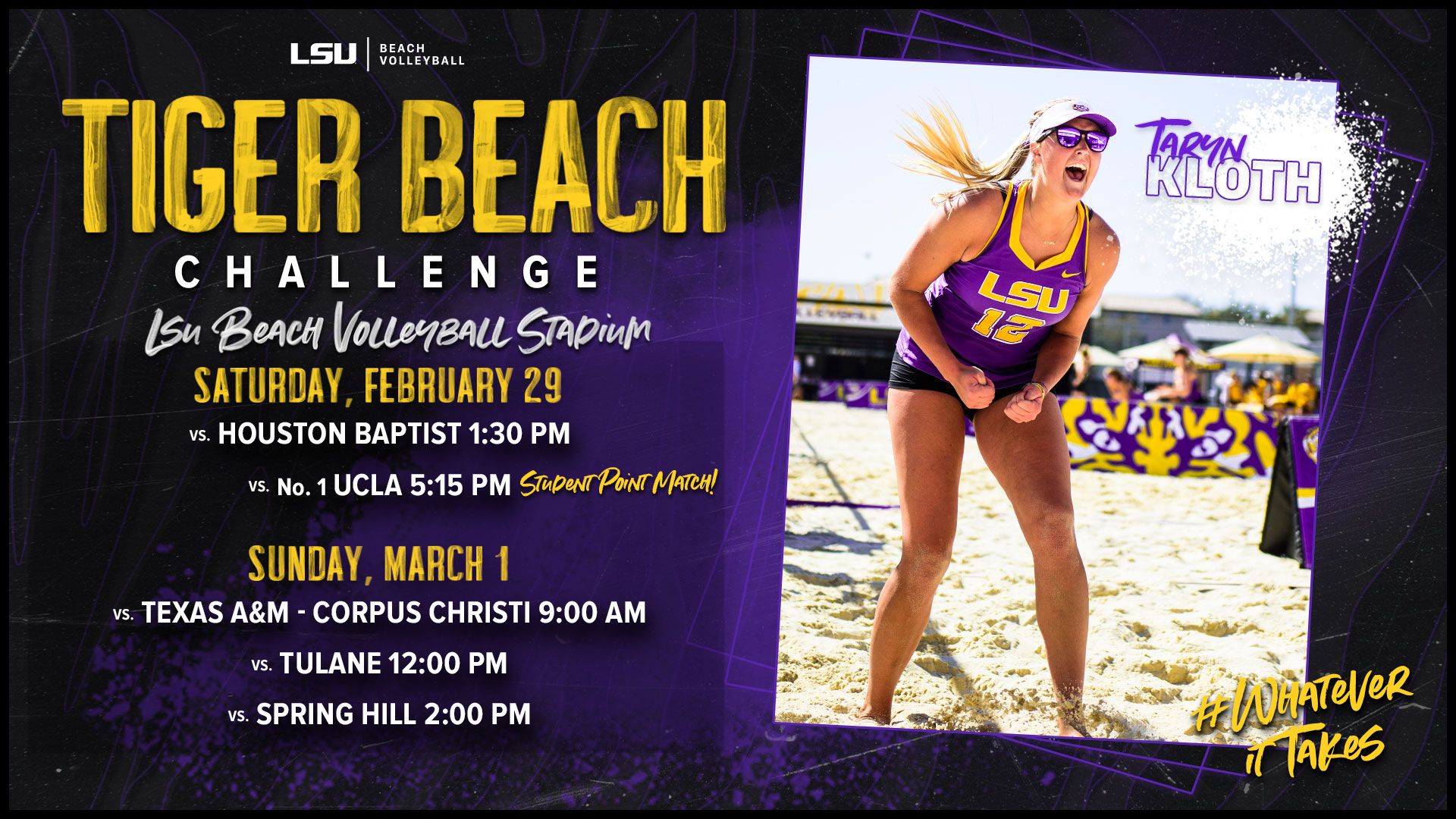 BATON ROUGE – The eyes of college beach volleyball will be fixed on LSU Beach Volleyball Stadium Saturday at 5:15 p.m. CT for a top-two matchup when No. 2 LSU hosts No. 1 UCLA during the Tiger Beach Challenge. LSU will have four other matches throughout the weekend as well.

LSU and UCLA split a set of matches last weekend in Hawaii at the Duke Kahanamoku Beach Classic.

“To have a one versus two matchup in any sport is exciting,” said head coach Russell Brock. “To have it for our team, at our home, we’re really looking forward to it. That type of atmosphere, that type of excitement and buzz is what fans can help bring and what they should expect when they come.”

LSU will host Houston Baptist Saturday at 1:30 p.m. before its matchup against the two-time defending national champion UCLA Bruins on Saturday evening.

There will be 250 LSU Beach Volleyball T-shirts given away beginning at 4 p.m. At the same time, LSU students will be able to present their LSU ID for priority point night where they can earn five points.

The Tigers then have three more matches on Sunday, beginning with Texas A&M-Corpus Christi at 9 a.m. followed by Tulane at noon and ending with Spring Hill College at 2 p.m.

All the matches will take place at LSU Beach Volleyball Stadium, located in the heart of campus on Cypress Drive, and admission is free. Fans are encouraged to park in lots 105 and 106 and enter through the west gates of the stadium.

Gates will open at 10 a.m. on Saturday and 8 a.m. on Sunday. Fans are reminded that the Geaux Clear policy will be in effect over the weekend. There will be a food truck along with refreshments, including adult beverages.

Over the past weekend in Hawaii, LSU and UCLA split a set of matches. UCLA took the first match on Saturday, 4-1, but the Tigers rebounded on Sunday with a 3-2 victory over the Bruins in the Championship match of the Duke Kahanamoku Beach Classic, earning the program’s first victory against UCLA and against a No. 1 ranked team.

Saturday evening will be the rubber match of this early season series between LSU and UCLA, but it will not be the last time they face each other this season. The two teams will face one more time during the final week of the regular season on Manhattan Beach Pier at the East Meets West Challenge.

This weekend will mark the program’s earliest home matches in its seven season history. During the inaugural season of LSU Beach Volleyball Stadium last year, the Tigers were 13-0 and have won 32 of their last 33 home matches dating back to their final two seasons of playing at Mango’s.

“We’ve had a lot of road matches to start the season (in previous years),” said Brock, “which there’s something to it. There’s also something really exciting about being able to get home and play, especially against some great opponents right away.”