Baseball Travels to Houston for Matchup with Texas

LSU will also play this weekend vs. Baylor and Oklahoma in Minute Maid Park 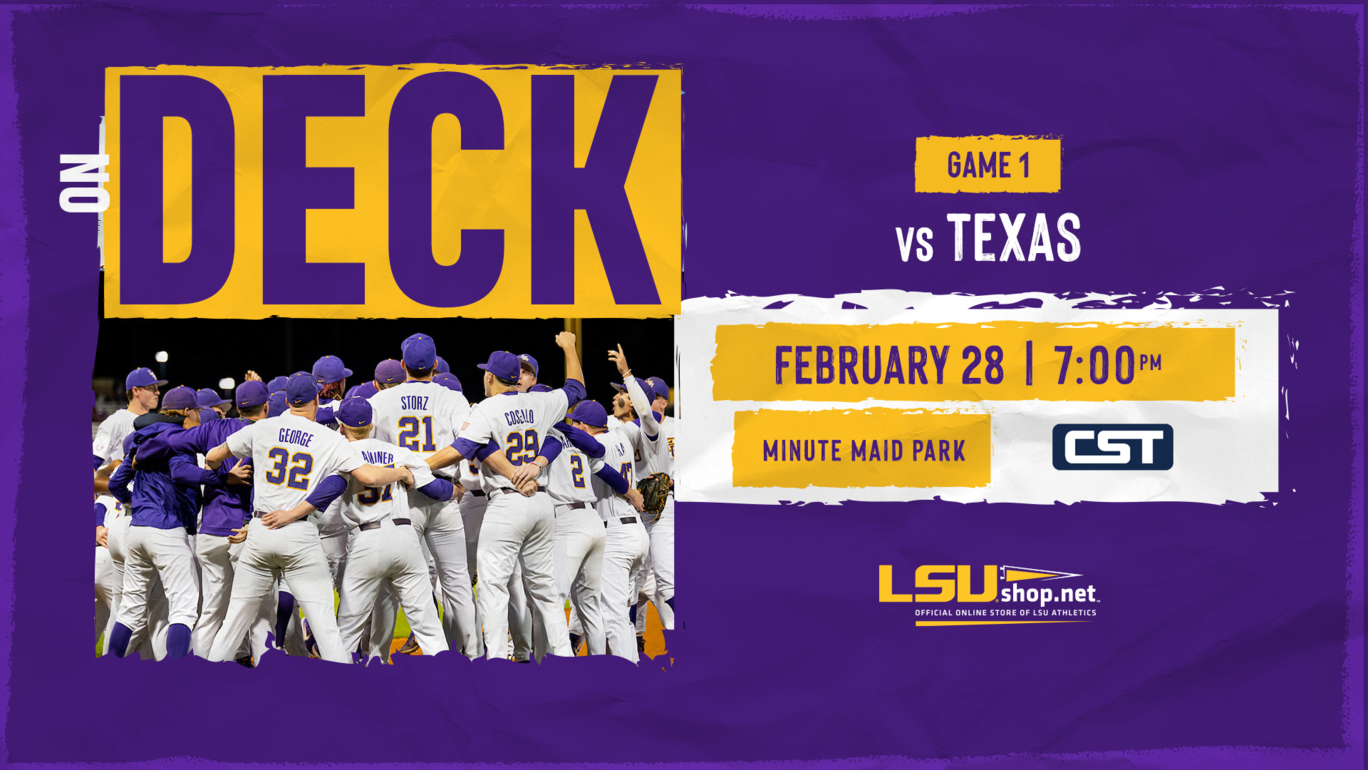 TICKETS
Adult and youth daily tickets and three-day tournament passes are available online at Astros.com/CollegeClassic. Fans can purchase premium tickets or group tickets, for groups of 20 or more, by calling 713-259-8030. Daily tickets purchased in advance are available for $20 for adults and $10 for youth (ages 14 and under). Three-day tournament passes can be purchased for $42 for adults and $24 for youth. Select parking in the Astros controlled lots will be sold for $15 and $10 (Lot A, Lots B and C). Diamond parking will be available for purchase during the tournament. For interest in hosting a special event at the ballpark over the weekend, please call 713-259-8800. Student tickets will also be available for the tournament, but will only be sold at the Astros box office.

SERIES RECORD VS. TEXAS
Texas leads the all-time series with LSU, 25-12-1, including a three-game regular-season sweep of the Tigers in Austin last season. The teams also met in a regular-season series in Baton Rouge in 2018, when LSU won two of three over the Longhorns. The 2018 series was the first meeting between the schools since the 2009 College World Series Finals in Omaha, Neb., where LSU won two of three games over the Longhorns to claim the ’09 National Championship. LSU and Texas each have won six College World Series titles, which is the second-highest total in NCAA Division I history and trails only Southern California, which has 12 baseball national championships

QUOTING PAUL MAINIERI
“Texas is undefeated, so we’ve got a big game Friday night. It should be an electric atmosphere with LSU facing Texas in Houston, and I can imagine there will be quite a crowd there. It will be exciting, and hopefully Cole Henry will go out there and pitch a gem for us. 2009 was special when we beat them for the national championship; of course, the great Augie Garrido was coaching at that time, and it was a thrill to compete against his team. LSU and Texas are two of the marquee programs in the history of college baseball, so we’re looking forward to a tremendous experience on Friday night.”

ABOUT THE TIGERS
• LSU has won four of its past six games and three in a row … the Tigers are playing this weekend in Houston at Minute Maid Park in the Shriners Hospitals for Children College Classic, marking LSU’s third appearance in the event and first since 2017 … LSU will face Texas (Friday at 7 p.m. CT), Baylor (Saturrday at 3 p.m. CT) and Oklahoma (Sunday at 11 a.m. CT) in the big-league ball park.
• LSU has a 4-2 all-time record in the Shriners Classic with appearances in 2015 and 2017 … LSU swept Houston, Baylor and Nebraska in the 2015 event, and in 2017 the Tigers sandwiched a win over Baylor in between losses to TCU and Texas Tech.
• LSU began this week with a 7-1 win over Louisiana Tech Wednesday night as the Tigers’ offense erupted for 11 hits. Third baseman Zack Mathis, first baseman Cade Beloso and left fielder Maurice Hampton Jr. led the Tigers with a combined seven hits. Mathis was 3-5 at the plate with two RBI and one run. Beloso was 2-4 at the plate with two RBI. Hampton, who enters the Texas game on a five-game hit streak, went 2-2 in the batter’s box with three runs, two RBI and a walk.
• Coach Paul Mainieri is just three wins shy of reaching the 600-win mark in his 14-season LSU career … Mainieri has 1,461 victories in his 38-season collegiate
career, and he is No. 2 on NCAA Division I Active Coaches wins list, trailing only Mike Fox of North Carolina, who has 1,482 career victories.
• Sophomore right-hander Landon Marceaux fired a career-high eight innings last Saturday, blanking Eastern Kentucky by allowing only four hits with no walks and six strikeouts … Marceaux fired 80 pitches in the outing, 63 for strikes … he retired 11 straight hitters from the end of the second inning until the middle of the sixth … EKU’s only scoring threat against him came in the seventh after a lead-off single and a one-out double, but Marceaux pitched out of the jam with a groundout and a strikeout.
• Sophomore first baseman Cade Beloso has nine RBI in LSU’s last six games … in LSU’s series win over the weekend versus Eastern Kentucky, Beloso batted .455 (5-for-11) with one double and six RBI … in Saturday’s Game 2 win over EKU, he ripped a two-out, bases-loaded double in the bottom of the eighth inning, extending LSU’s lead from 3-0 to 6-0 in a game the Tigers eventually won by a 6-3 score … he was 3-for-3 in Sunday’s Game 3 win with three RBI … Beloso is batting a team-best .429 this season with three doubles, one triple, 10 RBI, a .571 slugging percentage and a .459 on-base percentage.
• Sophomore right-hander AJ Labas earned his first win of the season on Sunday with a quality start against Eastern Kentucky … Labas, who missed all of last season due to a shoulder injury, pitched seven innings versus EKU, limiting the Colonels to two runs on four hits with one walk and six strikeouts
• Junior right-hander Devin Fontenot picked up his second save of the season on Saturday versus Eastern Kentucky, firing a perfect ninth inning to preserve a 6-3 win … Fontenot entered the game with no outs and runners on second and third before recording three straight outs with a groundout and two strikeouts.

ABOUT THE LONGHORNS
• Texas is a perfect 9-0 this season with three-game sweeps of Rice and Boise State, and single wins over UT-San Antonio, Lamar and Sam Houston State.
• The Longhorns are batting .243 as a team with 16 doubles, two triples, seven homers and 16 steals in 20 attempts … UT’s pitching staff has a 1.65 team ERA with 88 strikeouts in 82 innings.
• Zach Zubia is the Longhorns’ top run producer with three doubles, one homer and 13 RBI … seven different players have homered for Texas, but none has more than one dinger this season.