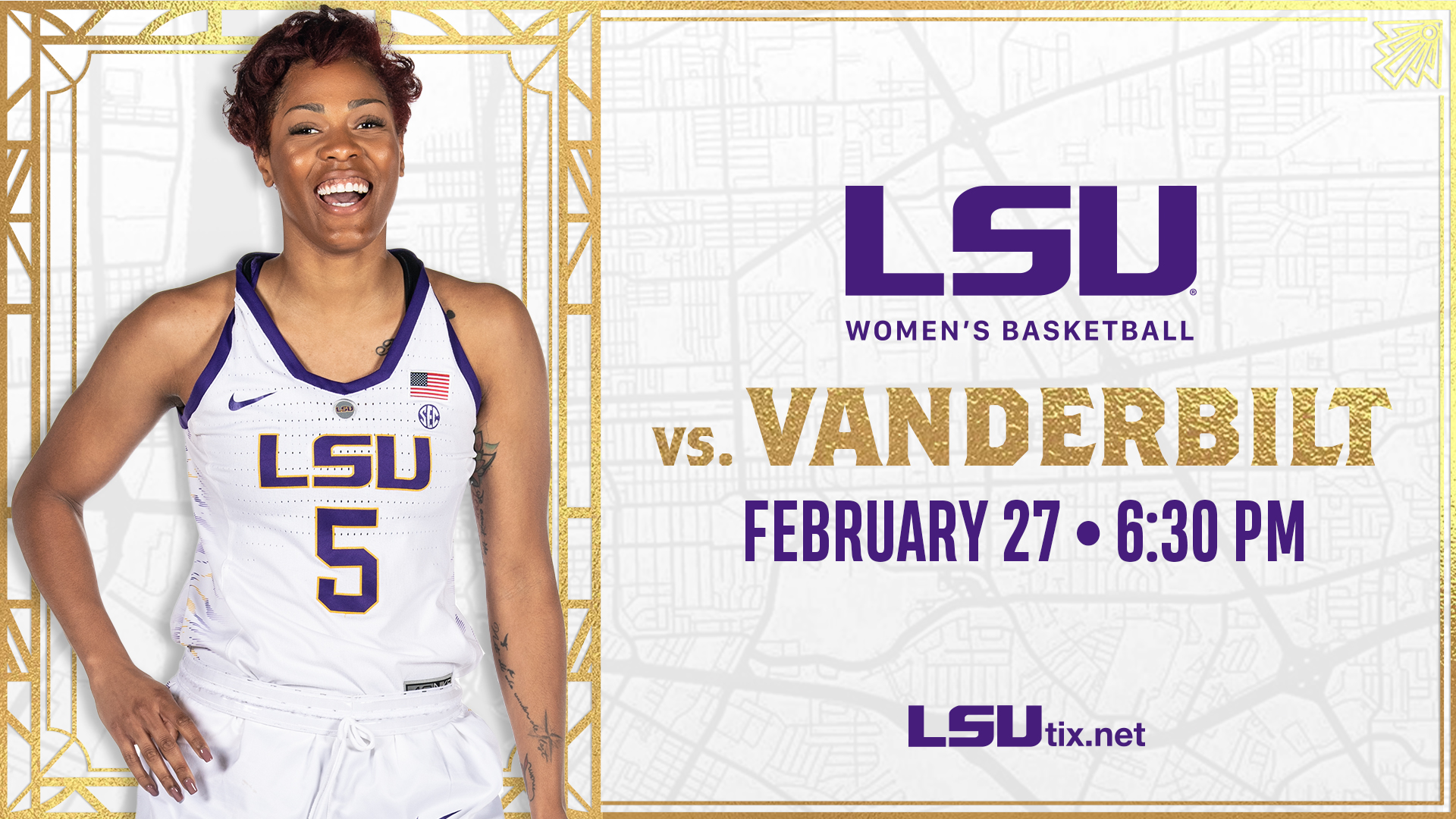 BATON ROUGE – The LSU women’s basketball team will host Vanderbilt in the final regular season game at the PMAC this year on Thursday, February 27 at 6:30 p.m. CT. LSU is 18-8 overall and 8-6 in SEC play, while Vanderbilt is 13-14 overall and 3-11 in conference action.

It is ‘Senior’ Night at the PMAC. Fans aged 55 and older get in free to the game. There will also be mystery giveaways during the game, while game sponsor Community Coffee will be handing out free K-cups as fans enter the PMAC. The 2020 NCAA Championship Trophy will also be on display with a chance for fans to win tickets to the 2020 Women’s Final Four in New Orleans through the Greater New Orleans Sports Foundation.

Lyn Rollins and Garrett Walvoord will call the game on Thursday for the SEC Network Plus.  Fans can also watch the game on the ESPN app. Patrick Wright will call the game on the LSU Sports Radio Network. Wright is in his 30th season as the “Voice of the Lady Tigers” and is joined on home broadcasts by Jeff Palermo. Fans can listen on 107.3 FM and audio broadcasts are available online at LSUSports.net/live. Live stats will be available at LSUsports.net.

LSU lost to Georgia at the PMAC on February 23, 73-56.  Junior Awa Trasi led the team with 13 points, while redshirt junior Faustine Aifuwa scored 12 points and had a team-leading six rebounds. Senior Jaelyn Richard-Harris also scored double-digits with 10 points and was 4-of-6 from the field. Junior Khayla Pointer contributed seven points and six assists.

Pointer leads the squad from the point with 14.8 points and 4.7 assists per game. She has one of the best free throw shooting percentages on the squad at 70.7 and the most steals with 59.

Aifuwa is having a solid season in the paint for LSU. Aifuwa is second on the team among active players with 10.6 points per game. She is sporting a 47.6 field goal percentage to go along with 8.0 rebounds per game and 45 blocked shots.

With the loss of Mitchell, LSU head coach Nikki Fargas counts on her bench to step up and fill the void with several players taking on different roles. Trasi moved into the starting slot and stretches LSU’s offense with her long-range shooting. Several players, including junior Rakell Spencer and freshman Tiara Young, come off the bench to provide a defensive spark against opponents’ top player.

Vanderbilt is currently on a 4-game losing streak, so both teams will be working to stop a late-season skid. The Commodores have been plagued with several season-ending injuries throughout the year, including sophomore Brinae Alexander who was their leading scorer at the time of her Achilles injury.

The Tigers will finish the regular season on Sunday, March 1, at Arkansas. Game time is set for 1:10 p.m. and will be broadcast on SEC Network Plus.

Fans can purchase tickets for the Vanderbilt game at LSUtix.net.