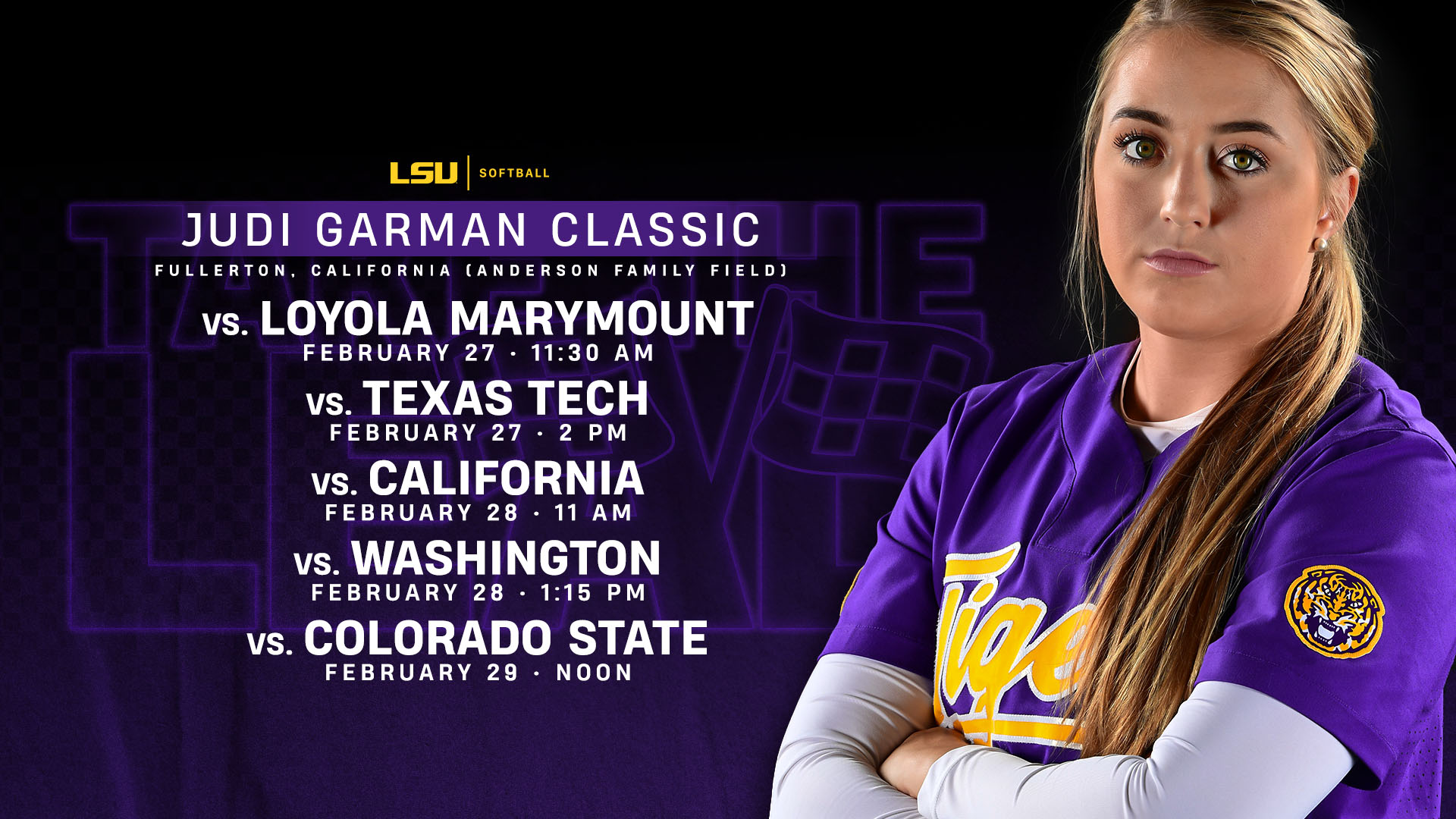 BATON ROUGE – The No. 4 LSU Softball team will travel to Fullerton, California for the Judi Garman Classic Thursday through Saturday at the Anderson Family Fields.

All five of LSU’s games this weekend will stream online through FloSoftball. A fee to watch will be required. All five games will also be available via live stats at LSUStats.com.

Torina’s Thoughts
On first big road trip and tough competition…
“It is a great opportunity for our team to continue to make forward progress. We are always looking for ways that we can grow, so this is a great opportunity for them to do that on a big stage. It is important that we travel at least one time before SEC play and that’s what we always try to do. It’s good practice for us to get on the road before we open up SEC play at South Carolina that first weekend in conference.”

About the Tigers
LSU goes into the weekend with a 13-1 overall record after a perfect 5-0 week last week. Maribeth Gorsuch picked up SEC and NFCA Pitcher of the Week, while Morgan Cummins earned SEC Player of the Week. The Tigers are currently on a seven-game win streak. Taylor Pleasants leads the team and is second in the SEC with a .500 batting average. She is 16-fo-32 at the plate with three doubles, two home runs, nine RBI and 13 walks.

In the circle, Ali Kilponen and Shelby Wickersham both have a nation-leading ERA of 0.00. Kilponen is 4-0 while Wickersham is 3-0. Shelbi Sunseri is 3-0 while Gorsuch is 3-1. Last week, the pitching staff collected five wins, 38 strikeouts, 4 hits allowed, 4 shutouts, two no-hitters and a perfect game.

Scouting the Opposition
Loyola Marymount
The Lions are currently 8-7 on the year. They are coming off a 14-1 loss to Delaware last Sunday. Molly Grumbo leads the team at the plate with a .521 batting average. She owns 25 hits with five doubles, a triple and three home runs. In the circle, Linnay Wilson is 3-3 with a 3.24 ERA to go along with three saves. She has struck out 30 in 25 innings of work.

Texas Tech
Texas Tech went 2-2 last week, falling in its final two games of the Houston Challenge to Houston and Syracuse. The Red Raiders have two top 25 wins under their belt with wins over SEC foes South Carolina and Georgia. Maddie Westmoreland leads the team with a .438 mark at the plate. Breanna Russell is hitting .370 with four home runs, three doubles, a triple and 14 RBI. In the circle, Erin Edmoundson has seen the most action at 52.1 innings. She owns a 1.20 ERA and is 6-1 with 62 strikeouts.

California
Cal goes into the weekend with a 9-6 record. The Golden Bears are coming off a 5-3 win over New Mexico on Sunday. They won two of their last four. Makena Smith leads the team with a .460 average, tallying 23 hits, five doubles, a home run and nine RBI. Mikayla Coelho is hitting .422 with 16 RBI. In the circle, the Golden Bears have relied on two arms in Chloe Romero and Alexandra Perez. Romero owns a 3.43 ERA and is 4-2 with 26 strikeouts in 47 innings. Perez is 5-4 with a 3.45 ERA. She has tallied 28 strikeouts in 50.2 innings of work.

Washington
The Huskies went 5-0 last weekend at the Mary Nutter Collegiate Classic and are on a nine-game win streak. They are 15-1 with their only loss of the season coming against SEC foe Alabama, 8-0 in five innings. Taryn Atlee is leading the team at the plate with a .450 mark. She has 18 hits, four doubles, two triples, seven walks and nine RBI. In the circle, the Huskies have used four arms this year. Pat Moore is 5-0 with a 1.94 ERA. Gabbie Plain is 7-1 with a 2.96 ERA and Kelley Lynch is 3-0 with a 3.45 ERA. Plain leads the team in strikeouts with 63 in 47.1 innings.

Colorado State
Colorado State is 8-6 on the year and has won its last three games. Ashley Rulz is hitting a team-leading .326 with three doubles and a home run. In the circle, Jessica Jareckl has seen the most time with a 1.93 ERA and a 2-3 record in 36.1 innings of work. Danielle Serna is 3-1 with a 1.94 mark. Taylor Gilmore leads the team in strikeouts with 22 in 26 innings.

What’s On Deck
The Tigers are back at home next weekend, hosting the LSU Round Robin. The Tigers will welcome in Campbell and Illinois State. The first game of the weekend is set for Friday, March 6 against Campbell at 6 p.m. Click here for a full schedule.