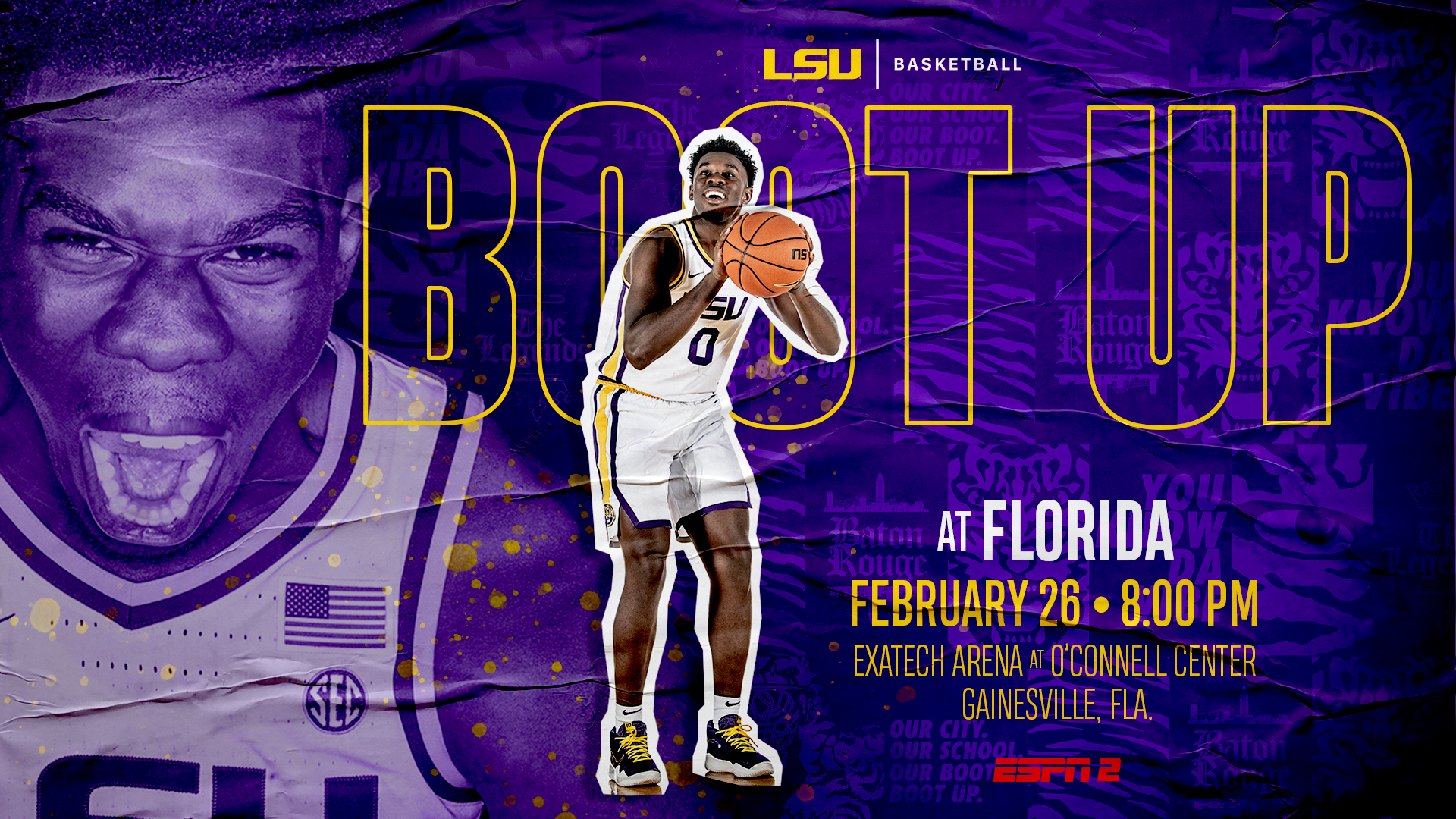 BATON ROUGE – The LSU men’s basketball team looks to win two straight on the road Wednesday night when it travels to Gainesville, Florida to take on the Florida Gators.

The game is set for an 8 p.m. CT tipoff at Exactech Arena at the Stephen C. O’Connell Center. The “Voice of the Tigers” Chris Blair and former head coach John Brady will have the call on the affiliates of the LSU Sports Radio Network (Eagle 98.1 FM Guaranty Media BR Flagship) and Tom Hart and Andy Kennedy will have the television broadcast call on ESPN2.

The Tigers will be looking for their 20th win overall and their 11 in Southeastern Conference play. Florida is 17-10 and 9-5 in the SEC.

LSU is presently in a tie for second in the league with Auburn as it tries to obtain one of the four double byes into the league quarterfinals, bypassing the first two days of the tournament.

LSU is coming off an 86-80 win at South Carolina in which Darius Days and Javonte Smart each had 18 points, Trendon Watford had 15 (11 rebounds) and Skylar Mays had 13 points and six assists.

Florida is coming in off a 65-69 loss at Kentucky that stopped a three-game win streak for the Gators. Keyontae Johnson led Florida with 19 points while Kerry Blackshear had 18 and Tre Mann 13.

Florida and LSU are meeting for the second time this year after meeting three times in the 2018-19 season. LSU scored an 84-82 win over the Gators back on Jan. 22 in Baton Rouge. Florida shot 50.8 percent in the game and made 11 threes, while the Tigers shot 47.5 percent with two treys but made 24-of-31 free throws.

Six LSU players were in double figures with Emmitt Williams leading with 19, Mays had 18, Watford 14, Javonte Smart 13 and Days and Marlon Taylor 10 each.

LSU out rebounded the Gators 36-28 and 15-8 on the offensive boards with the Tigers getting 50 points in the paint.

How close have the games been recently with LSU and Florida? During the last four games between the two teams, Florida has a 294-293 scoring advantage. Twice in the last four games, the teams have needed overtime to decide things.

The Tigers return home Satruday for an 11 a.m. game with Texas A&M. The jersey of Mahmoud Abdul-Rauf will be retired at halftime. Tickets are available online at LSUTix.net.

Coach Will Wade visited with the media before the Tigers left for Gainesville and here are some of his comments:

Opening Statement:
“Well, obviously a huge win for us at South Carolina. We played well. We have to turn the page quickly. We have a brutal, brutal week coming up. We’ve got Florida Wednesday night at 8 p.m. CT/9 p.m. ET then we’ve got to play Texas A&M at 11 a.m. Saturday. Florida is playing very well and Texas A&M is playing very well. This is the second time we’ve had this type of turn around and it is not right for our players. We played at Vanderbilt at 8 p.m. and then had to turn around and play at 11 a.m. at Auburn. Now we’ve got the same thing again which is not right … We’ve had three-out-of-four road games in this setup. It cuts our players preparation time down. This is not student-athlete welfare. I’m not making excuses. We didn’t play well the first time. We’ve got to play better this time. We are coming off a physical, physical game. Now we have to turn around and go to Florida and play at 9 p.m. We won’t be back until 2 a.m. Thursday. We’ve got to go to class Thursday. We won’t be able to do anything or have any preparation for A&M and A&M plays at 6 p.m. on Tuesday. We’ve been the beneficiary. I’m not an idiot. South Carolina had the same thing last week. They played at 8 p.m. in the late game at Mississippi State, they didn’t get back until 2 or 3 in the morning and had to turn around and play us but they at least got to play at 6 p.m. ET. It is what it is but it isn’t right. For the players.”

The matchup with Johnson and LSU …
“He’s big, he’s physical. He can drive the ball. He’s been shooting it better. He’s done a really good job on the offensive glass against us. Our defense was better against South Carolina but we didn’t block out like we needed to. Not going to survive giving up 20 offensive rebounds most nights. South Carolina just wasn’t able to finish. (Johnson) is a load. He can beat you off the bounce, he can post you. He can make threes. He can beat you just about any way. You can’t take away just one thing against him.”

Florida games close last year and this year with LSU …
“They’ve all been kind of different games. Some games Florida shot it well. Everything has been a little different. Just two teams that are very familiar with each other. We played them three times last year. It seems like they are one of our permanent partners although they are not one of our permanent rivals. But we played them twice last year (regular season) and this year. I think it’s just familiarity and the talent levels are close. The coaching staffs are familiar with each other.  It leads to good games and hopefully Wednesday will be another one. “

Darius Days season high three-pointers (4):
“The starting lineup changed for us and you had a five man guarding him and it allowed him to get cleaner looks early in the game. Same thing that happened in the beginning of the Auburn game. He’s an excellent shooter when he gets open looks he’s going to make a majority of them.”

Thoughts ahead of time on Mahmoud Abdul-Rauf and the jersey retirement ceremony this Saturday:
“I’m excited. I was excited last year when I got to meet him. He spoke to our team before we played Tennessee when he was in town to speak on campus. Obviously, he’s one of the best to play here at LSU. I was talking to our players the other day that he was Steph Curry before Steph Curry. That’s how I was trying to explain it to them. It will be fun on Saturday to have him back and recognize all his accomplishments here.”

Trae Hannibal was co-leader in scoring for the Tigers with 16 points.
Skip To Main Content