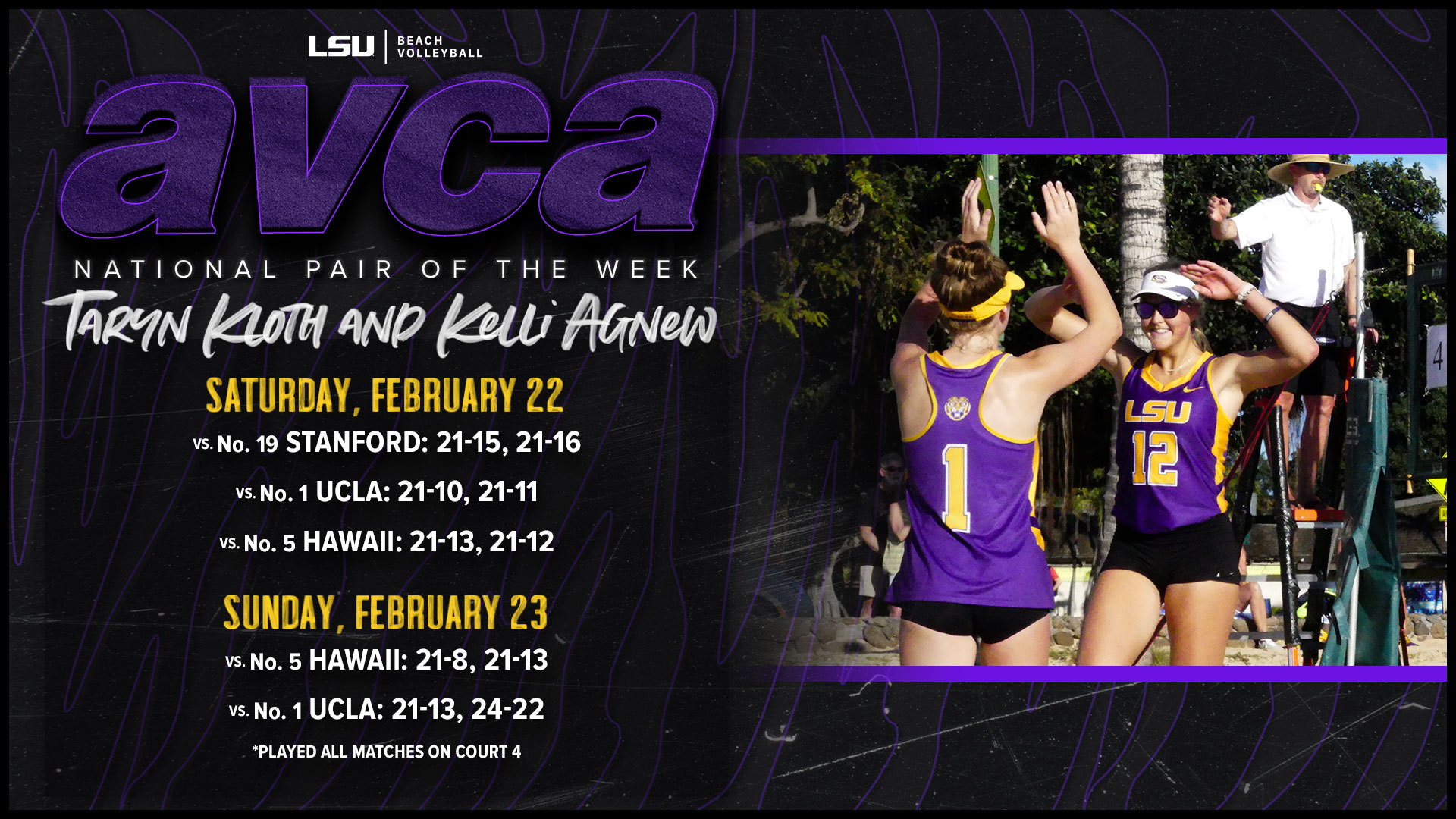 BATON ROUGE – Kelli Agnew and Taryn Kloth, who did not drop a single set all weekend in five matches against top competition in Hawaii at the Duke Kahanamoku Beach Classic, were named the AVCA National Pair of the Week on Tuesday in conjunction with collegebeachvb.com.

Over the weekend, the LSU 4’s pair of Taryn Kloth and Kelli Agnew went 5-0 without dropping a set, all against ranked opponents. ??#NCAABeachVB | ?? @LSUBeachVB pic.twitter.com/zxY0S8Qnm9

This is the third time an LSU pair has won AVCA National Pair of the Week and the first pair other than Claire Coppola and Kristen Nuss. Coppola and Nuss have won the award once in each of the past two seasons.

Agnew, a sophomore, and Kloth, a senior, were rocks for the Tigers over the weekend on Court 4, winning each set by an average of eight points. They won every set by at least five points except for the final set of the weekend which they won by two. Agnew and Kloth were crucial for the Tigers to win the tournament championship.

Despite LSU facing both Hawaii and UCLA twice over the weekend, Agnew and Kloth defeated five unique pairs on the same court. Hawaii and UCLA tried anything to slow down LSU’s Court 4 pair, as both teams switched up their pair on that court for the Sunday matches.

Agnew and Kloth began their Hawaii feast on Saturday against No. 19 Stanford’s Maddie Dailey and Shannon Richardson, 21-15 and 21-16.

In the second match of the weekend, Agnew and Kloth took down Devon Newberry and Megan Muret from UCLA, 21-10 and 21-11. Muret was 8-0 against pairs from ranked teams in 2019.

The LSU pair capped off their Saturday against Hawaii’s freshmen pair of Hanna Hellvig and Ilihia Huddleston, 21-13 and 21-12.

Hawaii brought its Saturday’s Court 5 pair of Kylin Loker, and Norene Iosia to Court 4 on Sunday to try and slow down Agnew and Kloth. The plan did not work. Agnew and Kloth continued to roll, 21-8 and 21-13.

Just like Hawaii, UCLA switched up its Court 4 pair to do anything to slow down the Agnew and Kloth. Just like in the Hawaii match, the plan did not work. UCLA put Rileigh Powers and Madi Yeomans on Court 4 for the Championship Match.

Agnew and Kloth defeated them, 21-13 and 24-22, capping off their perfect weekend. More importantly, Agnew and Kloth picked up a Court for LSU with the Tigers trailing 2-0 in the Championship Match against UCLA.

Claire Coppola and Kristen Nuss would go on to win Court 1 in three sets as did Ashlyn Rasnick-Pope and Toni Rodriguez on Court 3, giving LSU the championship.

LSU earned its first win in program history over UCLA and became the first team since May 4, 2018 to defeat the Bruins, other than USC.

LSU will host the Tiger Beach Challenge this weekend, February 29-March 1. There will be a top-two match Saturday at LSU Beach Volleyball stadium, featuring No. 1 UCLA at No. 2 LSU. The two teams split a set of matches over the weekend in Hawaii.

LSU will host four other matches throughout the weekend.