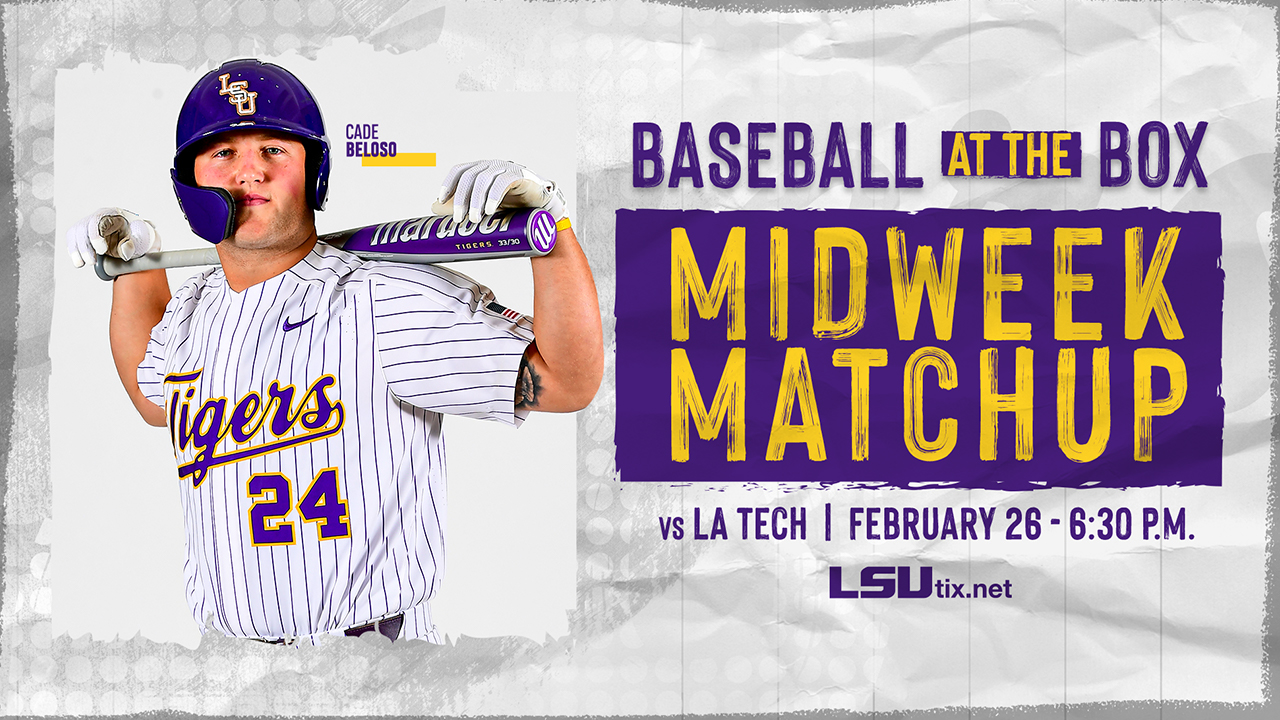 • Wednesday’s game will mark just the fourth meeting between the schools since 1998; however, the teams are meeting this season for the third year in a row and for the fourth time in five seasons.

• LSU and Louisiana Tech met on March 8, 2016, when the Tigers posted a 6-3 win over the Bulldogs in Alex Box Stadium, Skip Bertman Field. That 2016 contest marked the first meeting between LSU and Louisiana Tech since March 10, 1998, when the Tigers posted an 8-1 win over the Bulldogs in the original Alex Box Stadium.

QUOTING PAUL MAINIERI
“Everyone knows Louisiana Tech came in here last year and handled us pretty well. They’ve gotten off to a great start this season; (La. Tech coach) Lane Burroughs does a terrific job up there. Their team is really bonding; they have no home field this season due to last year’s tornado damage, so they’re playing at the local high school and other venues for home games. When you’re facing adversity and you’re having success, it builds a lot of team camaraderie, so I’m sure they’ll be a very confident team coming here on Wednesday.”

ABOUT THE TIGERS
• LSU won three of five games last week, including a weekend series victory over Eastern Kentucky … the Tigers will play this weekend in Houston at Minute Maid Park in the Shriners Hospitals for Children College Classic, marking LSU’s third appearance in the event and first since 2017 … LSU will face Texas, Baylor and Oklahoma in the big-league ball park.
• Coach Paul Mainieri is just four wins shy of reaching the 600-win mark in his 14-season LSU career … Mainieri has 1,460 victories in his 38-season collegiate
career, and he is No. 2 on NCAA Division I Active Coaches wins list, trailing only Mike Fox of North Carolina, who has 1,481 career victories.
• Sophomore right-hander Landon Marceaux fired a career-high eight innings last Saturday, blanking Eastern Kentucky by allowing only four hits with no walks and six strikeouts … Marceaux fired 80 pitches in the outing, 63 for strikes … he retired 11 straight hitters from the end of the second inning until the middle of the sixth … EKU’s only scoring threat against him came in the seventh after a lead-off single and a one-out double, but Marceaux pitched out of the jam with a groundout and a strikeout.
• Sophomore first baseman Cade Beloso collected seven RBI in five games last week … in LSU’s series win over the weekend versus Eastern Kentucky, Beloso batted .455 (5-for-11) with one double and six RBI … in Saturday’s Game 2 win over EKU, he ripped a two-out, bases-loaded double in the bottom of the eighth inning, extending LSU’s lead from 3-0 to 6-0 in a game the Tigers eventually won by a 6-3 score … he was 3-for-3 in Sunday’s Game 3 win with three RBI … Beloso is batting a team-best .419 this season with three doubles, one triple, eight RBI, a .455 slugging percentage and a .581 on-base percentage
• Sophomore right-hander AJ Labas earned his first win of the season on Sunday with a quality start against Eastern Kentucky … Labas, who missed all of last season due to a shoulder injury, pitched seven innings versus EKU, limiting the Colonels to two runs on four hits with one walk and six strikeouts
• Junior right-hander Devin Fontenot picked up his second save of the season on Saturday versus Eastern Kentucky, firing a perfect ninth inning to preserve a 6-3 win … Fontenot entered the game with no outs and runners on second and third before recording three straight outs with a groundout and two strikeouts.

ABOUT THE BULLDOGS
• Louisiana Tech is 5-2 this season; the Bulldogs opened the year with four straight wins – two over UL-Lafayette and one each over Southeastern Louisiana and McNeese State … Louisiana Tech dropped two of three games at Troy last weekend.
• The Bulldogs’ home stadium, J.C. Love Field, was severely damaged by a tornado in Ruston, La., last spring .. plans are in place to rebuild the stadium for an opening in 2021, so the Bulldogs are playing their home games this season at Ruston High School, at UL-Monroe’s Warhawk Field and at Smith-Wills Stadium in Jackson, Miss.
• Junior outfielder Parker Bates is off to a torrid start for the Bulldogs, batting .440 (11-for-25) with one double, one triple, three homers and 13 RBI … Louisiana Tech is hitting .258 as a team and its pitching staff has a 1.62 cumulative ERA.