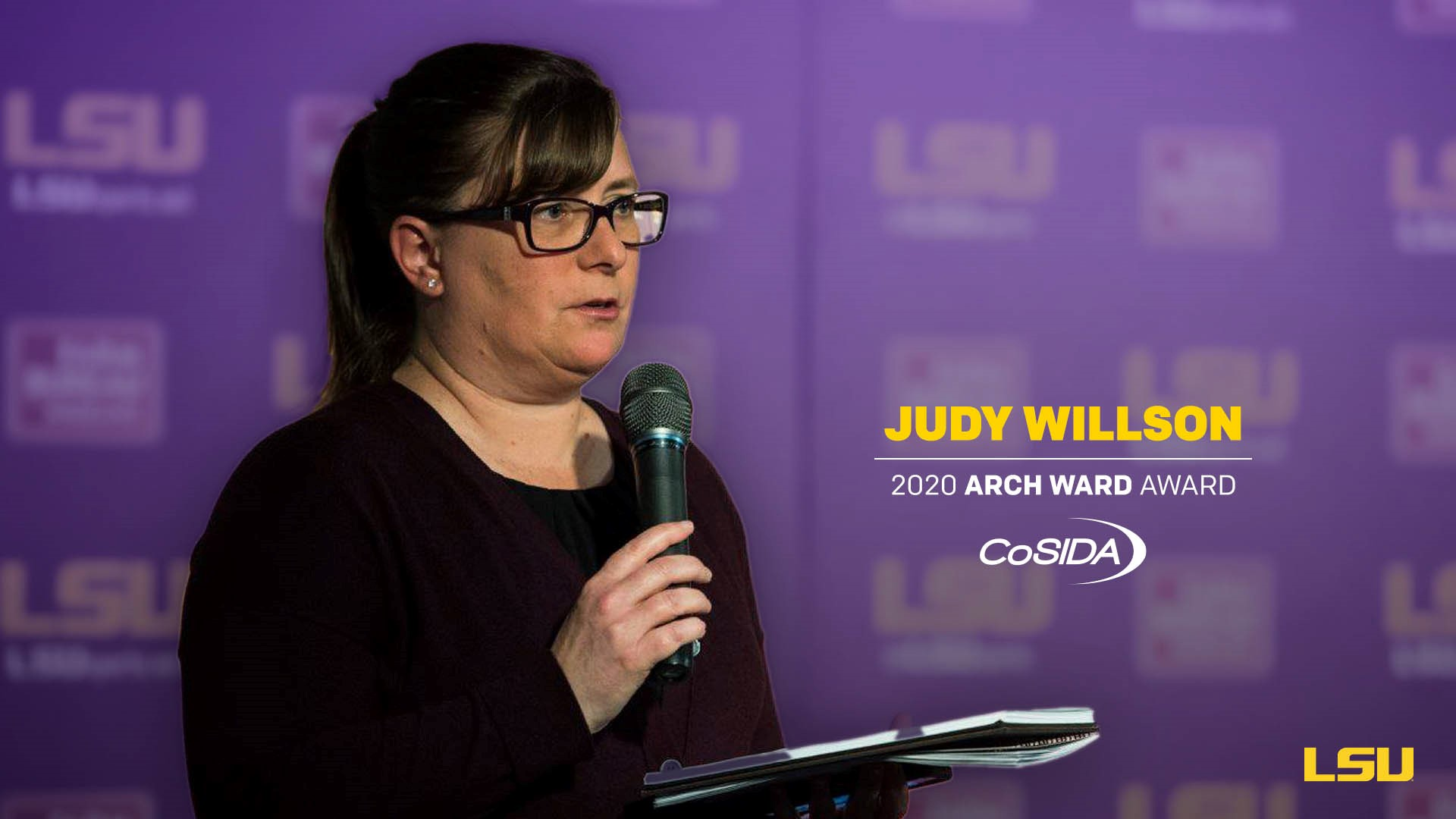 BATON ROUGE – The former president of the College Sports Information Directors of America and the present Associate Sports Communications Director at LSU, Judy Willson, was named Tuesday as the 2020 recipient of CoSIDA’s prestigious Arch Ward Award.

The official presentation of the award will take place in June at the group’s annual convention in Las Vegas.

The Arch Ward Award is presented annually to a CoSIDA member who has made an outstanding contribution to the field of college sports information, and who by his or her activities, has brought dignity and prestige to the profession. Ward was sports editor of the Chicago Tribune from 1930 until he died in 1955.

He is credited with inventing the concept of an all-star contest. All-star games began in 1933 with the first baseball all-star game and the following year, Ward initiated the College All-Star football game.

“Congratulations to Judy Willson on the honor of receiving the prestigious Arch Ward Award,” Vincent, who is the current CoSIDA President and former associate vice-chancellor for University Relations and Senior Associate Athletic Director at LSU, said. “Judy has served our organization for many years and this is a significant and noteworthy recognition of her service to CoSIDA and its members.”

Willson’s journey has taken her a long way from her hometown of Cambridge, Massachusetts and her alma mater of Geneva College in Beaver Falls, Pennsylvania. Ironically, it has taken her to and from Louisiana a couple of times in that journey but LSU Athletics has been the beneficiary of getting her back to this state in 2017.

“Judy is a credit to the profession and embodies the dignity and prestige this award represents,” said LSU Senior Associate Athletics Director Robert Munson, who oversees the athletic department’s communications, marketing and brand engagement teams. “Her contribution to the field and to each program at which she has served is incredible. Nobody deserves it more and all of us at LSU are proud to work with Judy every day.”

“Judy is a tireless worker who has done so much for this profession to make it better for everyone,” said Michael Bonnette, LSU Associate Athletic Director and Communications Director. “She has promoted the ideas of inclusion and diversity in CoSIDA that helped that organization continue to grow. She has mentored so many who have entered our business and is continuing that here at LSU with the students that are interested in this profession from the Manship School of Journalism.”

Willson, in her third season at LSU, is the primary contact for the LSU Women’s Basketball and Women’s Golf teams. She also, as mentioned, oversees the Communications Department’s extensive student assistant program while assisting with staff day-to-day operations.

“Judy is truly deserving of this prestigious honor for the outstanding contributions she has made,” said LSU Women’s Basketball Coach Nikki Fargas. “She has devoted herself to the world of athletics, while leaving a positive impact at every level. Judy has been committed to helping so many people over the years. Congratulations, and well deserved.”

Before coming to LSU, Willson served as a member of the Mountain West communications staff. She served as the primary media contact for women’s basketball, volleyball, baseball and women’s swimming and diving, in addition to assisting with the overall communications operation. She served as the local host media coordinator for the NCAA Women’s Final Four held in Denver, Colorado and has served on the NCAA Women’s Final Four Media Coordination Committee for the past nine seasons.

Prior to moving to Louisiana for the first time in July 2000, Willson was at the University of Denver for two years and worked for over 10 years in the Division II ranks.

As mentioned Willson has been a CoSIDA leader for many years, including her turn in the officer rotation which saw her lead the organization during the 2015-16 academic year as president. She is currently a member of the CoSIDA nominating committee and is in her first year on the Academic All-America committee. Willson has sat on numerous CoSIDA committees and task forces, while also serving a five-year term on the group’s Board of Directors as an At-Large representative from 2002-07.

Willson graduated from Geneva in 1988 with an undergraduate degree in psychology with minors in business administration and public relations. She earned a Master’s degree in physical education with an emphasis in sports administration from Eastern New Mexico University in 1997. She is currently serving on Geneva’s Legacy Hall of Fame Committee.