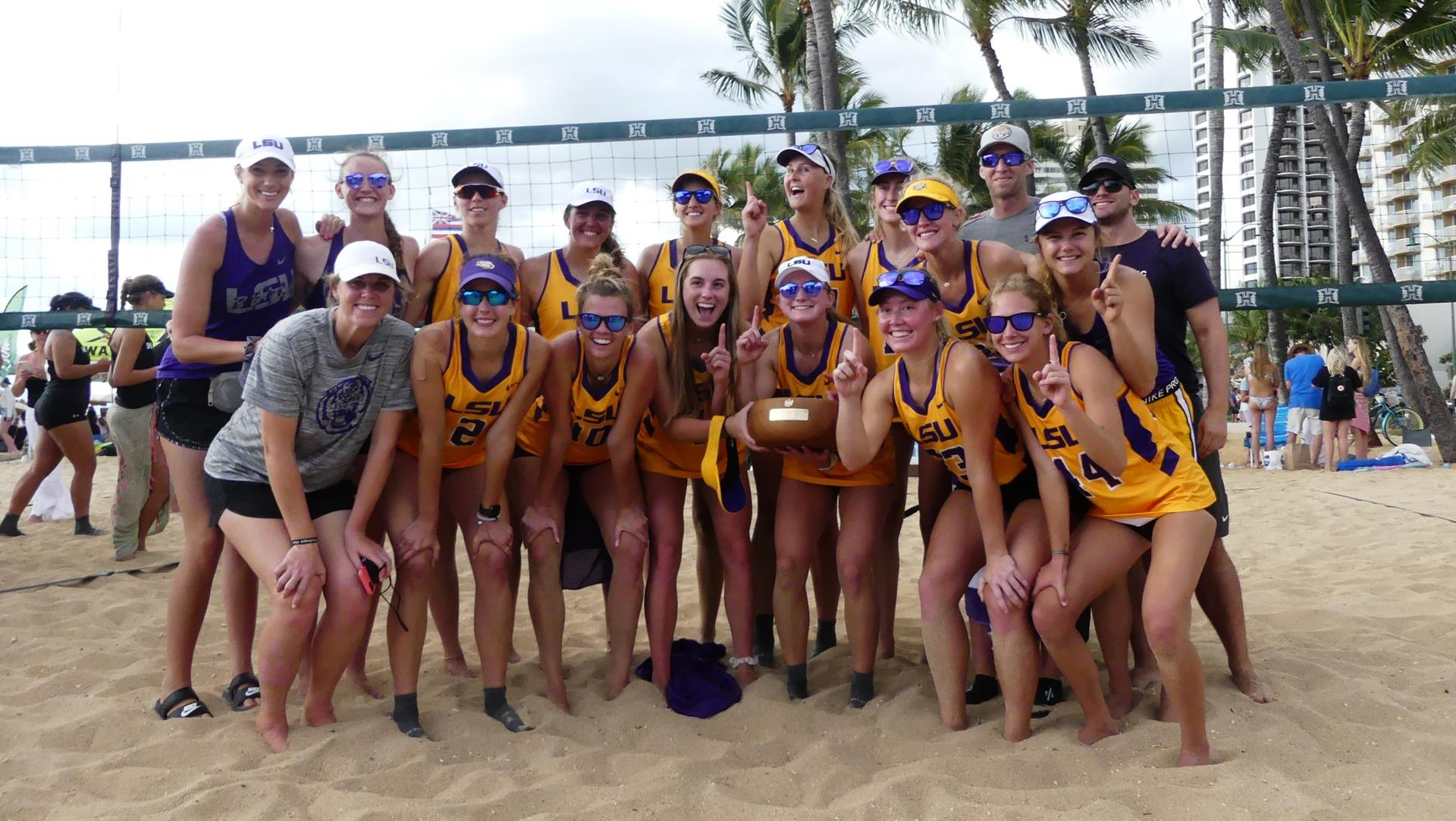 HONOLULU – No 3 LSU avenged Saturday losses to both No. 5 Hawaii and No. 1 UCLA to open the 2020 season with a victory in the Duke Kahanamoku Beach Classic on Queen’s Beach.

LSU defeated Hawaii in Sunday’s first semifinal, 4-1, and took down UCLA in the Championship to win the classic, 3-2.

“When it doesn’t seem likely,” said head coach Russell Brock. “Our job is to do whatever we can, let it fall where it may and trust that the process is going to end up where it needs to end up.”

It was the first time in program history that the Tigers were able to pick up a win over the Bruins. They did so in the Championship Match at the Duke Kahanamoku Beach Classic, earning hardware to bring back to Baton Rouge.

Heading back to Louisiana with some hardware! pic.twitter.com/fcTkKXLvUY

“We played our best in the toughest conditions against the toughest opponents,” Brock said. “Our backs were against the wall today, playing Hawaii out of the box and the obviously playing against UCLA.

“They’re the two-time defending national champs and nobody’s beat them in a long time.”

LSU will host UCLA next Saturday at LSU Beach Volleyball Stadium when it opens its home slate at the Tiger Beach Challenge. The Tigers will host four other matches throughout the weekend as well.

In the first semifinal of the Duke Kahanamoku Beach Classic, LSU avenged its Saturday loss to Hawaii with a strong 4-1 showing.

Kelli Agnew and Taryn Kloth continued their dominance on Court 4 with their fourth straight-set win of the weekend in as many matches. They gave LSU the first court of the match, 21-8 and 21-13.

Claire Coppola and Kristen Nuss earned their 93rd career victory together in Court 1 with a straight set win, 21-17 and 21-19.

On Saturday, LSU lost in three sets on Court 3 when the match was tied at 2-2. On Sunday, with the Tigers up 2-0, Ashlyn Rasnick-Pope and Toni Rodriguez used Court 3 to clinch a spot in the championship for LSU.

Allison Coens and Hunter Domanski battled hard on Court 5. They took the second set, 21-19 after losing by seven points in the first set. Hawaii went on to win on Court 5 on the third set, 15-11.

UCLA defeated Stanford in the other semifinal, setting up a Tigers versus Bruins championship match.

“Being down 0-2 in the final and knowing that we’ve got to get to a third, or win a third when they get it to a third,” said Brock. “You couldn’t ask for a better scenario to see how much we’ve got.”

Agnew and Kloth got the Tigers on the board and continued to roll on Court 4. The LSU duo did not drop a single set all weekend and took down UCLA’s 4s, 21-13 and 24-22.

After dropping the first set, 21-16, Coppola and Nuss came back with a vengeance. In the second set LSU’s top pair won a tight one, 24-22, to force a third. There Coppola and Nuss equaled the match for the Tigers with a 15-11 win, setting up a deciding match over on Court 3.

As it became evident that the match would come down to Court 3, the whole beach surrounded to court, setting up an electric atmosphere. As Coppola and Nuss won on Court 1, Rasnick-Pope and Rodriguez were down on Court 3, 5-8.

Down 11-8, LSU Court 3 pair began their comeback and on a miss-hit from UCLA, won the set, 15-13, to give LSU the win over the two-time defending national champions and to win the Duke Kahanamoku Beach Classic.

No. 3 LSU hands the defending champs their first loss of the year, defeating No. 1 UCLA, 3-2, to win the Outrigger Beach Classic. #NCAABeachVB | ?? @LSUBeachVB pic.twitter.com/qX0IZrbC8H